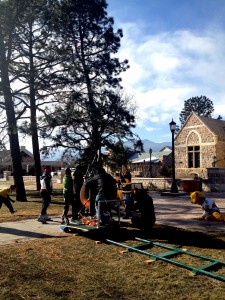 The temperature hovers just over 7 degrees. They’re in short sleeves, single-layered tees, soccer jerseys, no scarves or beanies. I’m wearing two layers of tights beneath my jeans, a thermal, mittens, and a ski coat. Though I’ve only been outside for some 15 minutes, my thighs already burn from the freeze. They’ve been shooting since 8 and it’s nearing 11 on this blistering bright Sunday morning in January—this group of enthusiastic students, staff, faculty, and alumni working on Cutler Quad to make a video that emulates CC’s spirit.

Chill clouds puff from chapped lips, and I wonder if the day’s frost will be captured on screen. The camera chases, again and again. Set. Take nine. Rolling. Speed. And action. Jake Sullivan ‘15, the man of the hour, talks while he walks backwards, beaming into the camera that follows on its dolly. A soccer ball darts in the air past his head, he dodges, then smirks and keeps going. Prowler Tiger crawls across the icy stone ground. The extras howl and dance and jump behind until all stand in front of Cutler Hall. They cheer and scream out quirky CC highlights. Cut. The camera quits rolling and the actors huddle into coats and sweat pants. The crew looks over the film, then nod, laugh, comment, and call for another take. Jackets and hats are pulled off and the actors resume their starting place. 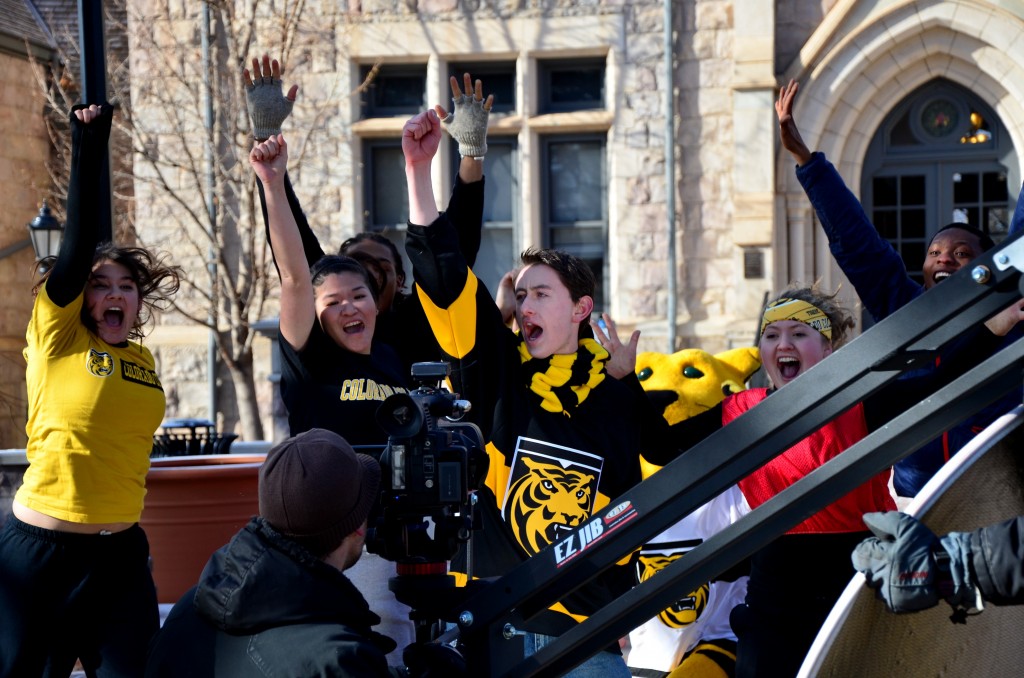 It’s January 13th and the Welcome to the Block Plan Admissions Spice video is being filmed. Did I mention it’s 7 degrees?

The camera races. Last week’s remaining snow sparks beneath the sharp sun. And then it snows and then it’s sunny and then it snows and then it’s sunny. Take twelve. At the end of each go, the actors sing out a new chant. We knit things for trees! We crotchet tree huggies! Costume adjustments are made—only black and gold (and denim jeans) for Jake, no purple allowed. Heat pockets are rubbed. The positioning of the reflective bounce disc is altered. They’re all smiling and muttering, mostly smiling, all working together to create something epic, something worthy to represent CC. It doesn’t matter that it’s a Sunday morning of half-block, still technically winter break. It doesn’t matter that limbs are numb and the wind is relentless. Okay, maybe it matters a bit, but everyone involved is nonetheless pumped, happy to help, to participate and make something fabulous together.

I’ve only been observing for a single hour of one day. These same actors and crew members spent yesterday morning—an even more frozen Saturday—shooting at Garden of the Gods. There was salsa dancing and rappelling into a make shift classroom in front of the stellar red rocks and glazed-white Pikes Peak. I imagine the scene will look as if it’s filmed before a backdrop—Colorado Springs is often too extraordinary for reality. And then there’s today, so cold, such a vibrant blue, that particular delicate winter light. Winter Starts arrived yesterday and, as the morning progresses, more students pass by, intrigued by the cameras, by the insane group working, playing, in the cold. 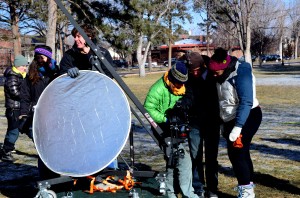 The crew huddles around the camera after each shoot. They review and revise. New ideas form every time—such relentless enthusiasm and persistence for the ideal, it’s a joy to witness even with my numb toes. “Really, probably, this is maybe the last one,” Arielle Mari’12, the always-smiling director, says more than twice. No one complains. They jump to their place, clapping, laughing. The in-progress video is the first taste many prospective students will have of CC, and it’s also the first time a search video—which is made every other year—is filmed in-house by campus blood.

When the final take is shot and the moment is wrapped, I photograph the crew in front of Cutler. My hands shake from the cold. Obviously I’m more of a pansy than these dedicated folk—they’ve been outside for hours longer than me, wearing far less, and each is giddy. Freeze high maybe? They huddle together, grinning, cheeks red. Their long, cold weekend working together to express the ride of Colorado College through film is compete, but I don’t believe they smile because the job is done. Rather, perhaps they smile out of pride, friendship, passion. This is CC. Enjoy the ride.

[UPDATED 3/27/13] It has been brought to my attention that, contrary to popular assumption, this shoot was not the first time CC students and faculty have made a video to represent the College. Ten years ago, under the guidance of the then-director of the Film Studies program, Tom Sanny, was doing this very thing–working with “CC blood” to create an admissions search video. Today, it is the Film Studies program that makes it possible for videos to be filmed in-house by those who know CC best.