I’ve been to London twice in the past six months. The first time I went with my family and absolutely abhorred the experience. After visiting every single possible tourist location in all of England, we rented a car and drove four hours to the ‘Dr. Who Experience’—which is some sort of strange hybrid museum/amusement ride that really wishes it were in a better place than a fishing port in Cardiff. Once we finished our “interactive journey” through the museum, it was another four hour drive back to the hotel. The good news is that I saved the world from vacuum cleaners. (I think fans of the television show prefer the term ‘daleks.’)

–
This time around, I’m here with a college class. I’m not saying that things are great—approximately four-fifths of our waking hours are devoted to studying Shakespeare—but London is definitely easier to appreciate when you’re with people your own age. For instance, a few of us went to a high-end club yesterday where I somehow managed to trick two girls into dancing with me! Then again, both of them stopped after suffering about fifteen seconds of my pitifully awkward ‘moves.’

–
Now, coming with my parents did have its advantages: free meals, free lodging, free souvenirs, etc. But even though I love my family very, very much, there’s something strange about vacationing with them. It’s less of a trip and more of a guided tour. Oh, and not that I’ve been drinking (because I haven’t been drinking), but if I had been drinking, what I would say is that beer tastes disgusting. 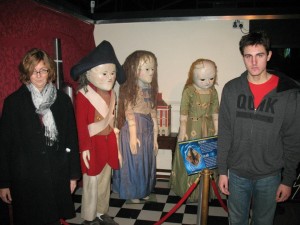 My mother and I join the ranks of the evil dolls at the Dr. Who Experience.