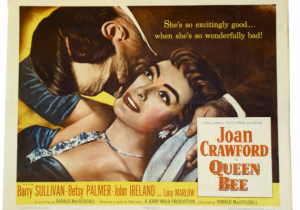 We spent all of class on Thursday dissecting the Queen Bee. Kate, Katherine, Andrew, and Ben (Glen Coco) led us in a discussion about the Queen Bee character in film, literature, and pop culture. We began with this quiz, which I recommend you also take: 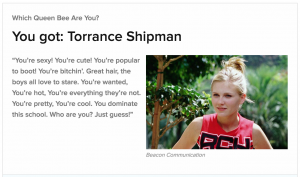 Bring it on. Lucy got Regina, Star got Blair, Andrew got Rizzo, and Lisa got A Bee (“No one could exist with out you youre always the center of attention and you deserve it. You are a great leader and endlessly loyal to your followers, which makes you a true gem”).

How many Queen Bees can you name? Here are some common qualities:

A real Queen Bee creates most, if not all the bees in her hive. There can never be two Queens in a hive, and an “old” Queen will fight the up and coming “new” Queen to the death. The Queen Bee doesn’t have a barbed stinger – she can sting over and over again. The worker bees feed the Queen royal jelly.

Joan Crawford’s character in Queen Bee (1955) fits the role perfectly. She is powerful, beautiful, manipulative, and wealthy. One of the most interesting aspects of her character is the power in her female sexuality. Not only can she manipulate and control men with it, but she can also bring down the women of the Phillip’s house with the same power. She controls the other women’s sexuality (arranging and dressing Jen for her date with Ty) and can ruin them completely by sexually overpowering them and their men (Carol’s suicide).

And which one are you?

My name is Kendall Rock, and I hail from Poulsbo/Seattle, Washington. I am a Film and New Media Studies major and English minor at Colorado College. I can't cook, but I love unicycling, knitting, and being outside. I will try my best to be honest and fair, friendly and helpful, considerate and caring, courageous and strong, and responsible for what I say and do, and to respect myself and others, respect authority, use resources wisely, make the world a better place, and be a sister to every Girl Scout. View more posts