The Journey to 77° South

I left the States from Denver on November 3rd and arrived at McMurdo Station on the 7th, travelling through Los Angeles, Sydney, and Christchurch. We arrived in Christchurch on the 5th , and the next day we were shuttled to the United States Antarctic Program (USAP) campus where we had a series of briefings & trainings regarding life on the Ice, and were brought to the Clothing Distribution Center (CDC) to be issued our Extreme Cold Weather gear (ECW). 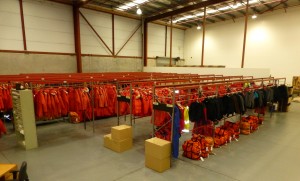 The CDC hosts a warehouse of parkas, fleece coats & pants, mittens, hats, goggles, boots, and pretty much everything else needed to keep you cozy while in the field – except for good ol’ long undies. Anyone headed to McMurdo Station is allowed up to 85 pounds of luggage, including all the issued ECW.

I say this now: the USAP uses a ridiculous amount of three letter acronyms.

Fortunately, these trainings ended early enough so that we had about half a day to goof around in the city; I chose to go for a run with another member of ROSETTA-Ice, exploring Hagley Park and the Botanic Gardens, as well as some of the stone churches and building that were wrecked by the recent earthquake. The following morning a shuttle picked us up from the hotel at 5:45 am and brought us back to the USAP campus to check in, obtain our boarding passes – which were simple laminated cards with a number – pass security, and board the plane. We flew on a C-17 cargo plane; there was helicopter inside. 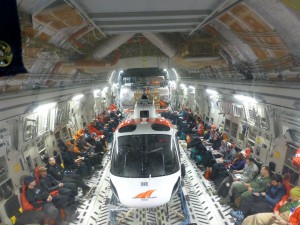 The inside of the C-17 from the deck.

Although I was certain I was going to fall asleep once on the plane, this proved to be a very silly prediction. I could hardly even read I was so excited and taken by the interior. The pilots allowed us on to the deck (I think I was the only person to go twice, it was that cool) so that we could see the ice from the sky, as the plane didn’t really have any windows for passengers. 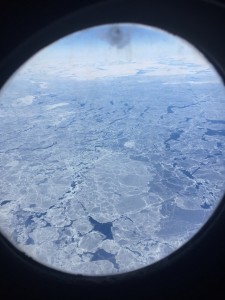 Looking out from a tiny window. 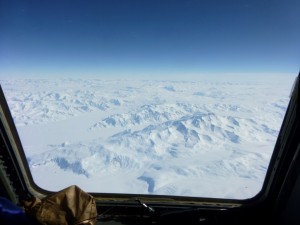 Looking out from the deck.

I first tried looking through the window without my sunglasses, and it seriously hurt. Antarctica during these summer months is always sunny and one must learn to adjust to twenty-four hours of daylight.

When the plane landed and I at last stepped onto Antarctica, I got goosebumps. I will always remember that ineffable feeling.

A shuttle then took everyone from the airfield to McMurdo Station. I cannot wait to fly again, with ROSETTA-Ice, in our mission to map the Ross Ice Shelf… 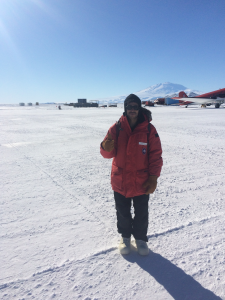