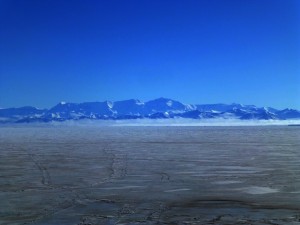 Although we have yet to begin our survey, these first few days in McMurdo have been quite busy. All scientists must go through a bunch of training/briefings that pretty much cover what not to do and how to survive while in McMurdo. During our (thankfully) indoor three-hour Field Safety & Training (FST) session held in the Science Support Center (SSC), we got acquainted with the contents of a survival bag, which, should our team get stranded on the barren ice, provides enough food, shelter, and some reading material until rescue.

The housing situation in McMurdo is dorm-style. I have a roommate (it happens to be his eighteenth season in Antarctica), and share a bathroom with two others who live next door. Each dorm has a resident assistant, a lounge, and if you are lucky, a library. 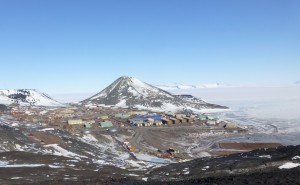 Yesterday I went for a walk to Discovery Hut – a memorial for Antarctic explorer George Vince who fell into McMurdo Sound in 1904 and died was erected here – and along the ridge on a loose path of volcanic rock known as Hut Point Trail. I was practically racing up the hill as I forgot to bring my neck gator and the wind here is incredibly cutting. 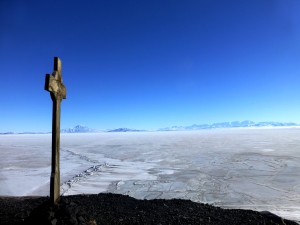 Since Mactown is populated with many scientists working on a variety of projects across disciplines in atmospheric science, ecology and oceanography, to name a few, it is not surprising that there are talks held twice a week. Yesterday I attended a talk focusing on paleomagnetics given by professor Lisa Tauxe of Scripps, UC-San Diego. I learned why we study the earth’s magnetic field, why it is so tricky to do so, and the probability that our planet is headed for a total field reduction (!) or reversal. 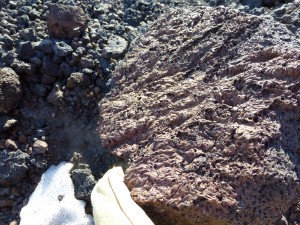 Volcanic rock on Hut Point Trail. [My fingertip for scale].

I am currently writing this in our cozy RAC (Remote Access Cave?) tent on the airfield known as Williams Field. Since the ROSETTA-Ice team will be spending many hours here, we stocked up on supplies taken from the Berg Field Center (BFC), including coffee & tea, mugs, coolers, sleeping bags, and pee bottles, among other camping essentials.

Delays are simply a part of life on the ice; planes break down, storms are fierce and the weather is hard to predict. Though I have spent a decent amount of time at the airfield, I actually have not heard or seen any planes take off or land. Hopefully, we are able to install the IcePod on Saturday and begin flying sometime next week!