The first thing that Major General Randy George did when he walked in the room, was shake everyone’s hand. It was 11:30am on October 23, second Tuesday of Block 3, and we were all excited for the opportunity to meet him (as well as to have been able to sleep late!). Major General George had come to class to discuss rebuilding the economy in Afghanistan. He was the perfect person to discuss this subject. After holding command positions in Iraq and Afghanistan, MG George served on the Joint Staff at the Pentagon, and as a fellow at the Council on Foreign Relations. He also has a Bachelor of Science from West Point, a Master’s in Economics from Colorado School of Mines, and a Master’s degree in International Security Studies from the Naval War College. 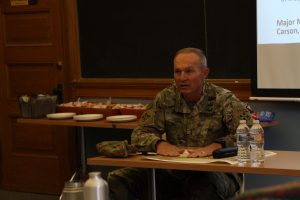 Despite all these qualifications, MG George is very humble. Soft spoken, with a sharp jawline and kind eyes, MG George talked about growing up in Iowa, his relationship with his wife, and the difficulties of war. He spoke of his efforts in Afghan villages to ensure that Afghanistan could stand on its own. One of the ways to he worked toward this goal was by giving $250,000 to each village. This allowed the people to autonomously decide the best, most sustainable ways to spend the money in their community. People built schools, roads, and more.

MG George was proud of the work he did in Afghanistan, but he admits that it is very difficult and often there is no clear path to success. Though he is nervous to return to Afghanistan, he believes that the consequences of the US leaving the county could create a dangerous power vacuum and destabilize neighboring countries. When he returns to Afghanistan in a few months, he will be working on training the Afghan police force and military.

As MG George prepared to leave, he gave our class a few pieces of advice. “Become an avid reader,” he said, “and learn another language.” 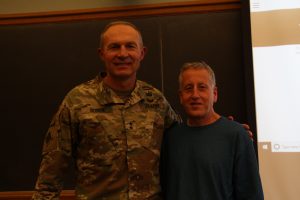