“Food, Agriculture, and the Environment”. Update #2.

On Friday, June 28th, to round out the first week of the class, we met first to discuss agricultural biotechnology and then walked over to the Fine Arts Center at Colorado College to visit an exhibit about the acequias of New Mexico. Genetically modified organisms are the subject of much heated debate for good reason. The law and policy that regulates the use of GMOs, and the law and policy that promotes GMO use, has profound implications for the economic viability of small and midsized farmers; the monopolistic control of the world’s food supply; the prevalence of poisonous pesticides, herbicides, fungicides, and fertilizers in food and water; the health of the world’s soils; seed biodiversity; food sovereignty; food supply resilience and security; the validity of scientific research; the corruption of government institutions; and health outcomes, including life expectancy and fertility. I will not flesh out these implications in detail, nor did we do so in class, but studying agricultural biotechnology is a worthwhile endeavor. One of us students will perhaps write our research paper on a certain element of the subject. Hopefully the technology will be used for more constructive and honest purposes than it has been in the past, and hopefully the industry and government will be more transparent about who is funding what and who is truly benefitting from the rollout of GMO, patented seeds, especially those made to be resistant to a chemical. Please do investigate thoroughly before coming to a conclusion about the efficacy of GMO seed, but dig deep and watch out for who funded the study you are reading. Also, just because Bill Gates supports further GMO adoption does not mean you have to invest in the same biotech he does, especially if you care about all of the things listed above.

After this not-so-heated discussion about biotech (there was not much dissension), we were given a tour of the artist Christine Howard Sandoval’s exhibit entitled Channel by a staff-member at the Fine Arts Center at Colorado College museum. Acequias are agricultural waterways, originally Indigenous, maintained by the Spanish in New Mexico. These acequias are very much in use today. Their continuous use and maintenance is the way many Indigenous and Hispanic people retain their water rights in New Mexico. The exhibit highlights the importance of this infrastructure for shaping the social life and sense of solidarity within communities. Communities that are often fiscally impoverished, but rich in tradition and culture. Sandoval is Obispeño Chumash and Hispanic and her multi-media work considers “the boundaries of representation, access, and habitation via an experiential and community-oriented practice” and the “place, time, and ideas about the  democratization of scarce resources” (https://fac.coloradocollege.edu/exhibits/christine-howard-sandoval/). She finds that the ecological ethos of the acequia, a system that irrigates the desert, is important today in regards to the realities of the anthropocene we are all a part of. The exhibit was relevant to our class because it is important to tell all sides of the water story in this arid landscape where water is our most precious resource. Great civilizations have collapsed because they mismanaged their water (and soils), and there is absolutely no reason that the same fate could not befall the swaths of the West that depends on a consistent water supply from the Colorado, Arkansas, and Platte rivers, and critically depleted aquifers. The exhibit runs until October 20th. 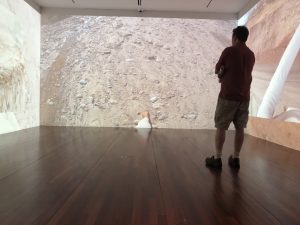 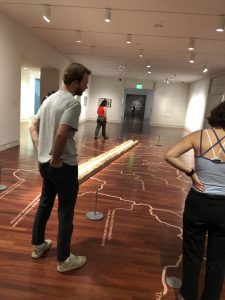 Examining Sandoval’s ‘Channel’ at the FAC

The Colorado Farm and Art Market is open on Wednesdays downtown and on Saturdays up north. Prof Harris helped found the Market which highlights local artists, producers of organic fruits and veggies and meats, and a few prepared food vendors. It is a rather modest market, but it has strong community support. We are required to write a reflection on a farmer’s market and CFAM is a good one to write about. I, however, will be up at the Boulder County Farmer’s Market (their Boulder Saturday market) next weekend. I have visited BCFM a number of times and have spoken with quite a few producers. They really put on a show up there, and Boulder’s exceedingly progressive, educated, yuppy, and affluent community takes the farmers market culture up a notch. Stay tuned for a blog with those details. 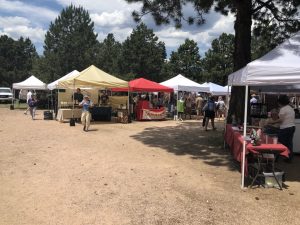 On Monday, the class walked over to the urban garden at Mid Shooks Run to meet with Barbra Gibb, executive director of Pikes Peak Urban Gardens (PPUG) and Andy Millman who started a large-scale community supported agriculture farm outside of Moscow to assist West African refugees and help decrease the fervent xenophobia that exists in Russia. After practicing and teaching psychology for a number of years, Ms Gibb managed community partnerships for Whole Foods Market, and since the Amazon merger, has taken over direction of PPUG. The organization helps community members create a deeper connection to their food sources, increase their self reliance, and build communal green spaces to break up the urban landscape. PPUG has built over a dozen community gardens since it kicked off in 2008 and it actively manages six gardens across the Colorado Springs area. It also has assisted schools, churches, and other organization in their garden projects to support local agriculture and gardening education. Ms Gibb spoke to us about the trials and tribulations of running such an organization, its impact, and its potential. Residents of the neighborhood purchase a plot in the garden and tend to it as they see fit, as long as they are decently dedicated and use organic methods. Gardeners bounce ideas off of each other and learn as they go. Some are highly experienced and even professional horticulturalists, and others are gardening nubies. Amusingly, some gardeners get into fairly intense disagreements, as Ms Gibb described, but quarreling and kvetching is a component of every community. PPUG produces a lot of vegetables. Any surplus produce is redistributed through Colorado Springs Food Rescue’s Fresh Food Connect Program. 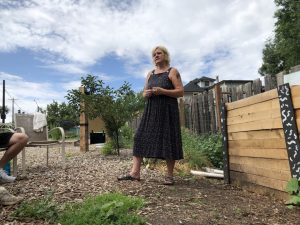 Next, Andy Millman took to the stand in front of the compost crate to tell us about his remarkable time in Russia. Millman had the brilliant idea to plant a CSA farm from scratch on an unused plot of land, some Soviet relic, in the countryside an hour and a half outside of Moscow. He harnessed the power, influence, and support of the sizable expat and diplomatic community in Moscow to get this thing up and running. He accomplished his program’s goals of reforming nationalist, xenophobic, and anti-migration rhetoric and out-lash; supporting the procurement of documentation for refuges and and the prevention of race-based violence; creating community organization and empowerment; and developing sustainable agricultural all in one fell swoop in his two years in Russia. The farm employs West African refugees and human-trafficking victims still today. The volunteers and CSA members of the farm represent some sixty nationalities. Millman fostered communication and community around the production of fresh food across language and cultural barriers. His story is really incredible and somebody should make a documentary about it. 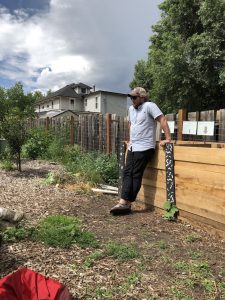 Andy Millman, recounting the story of his time in Russia 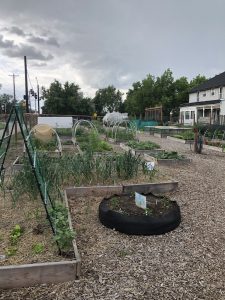 On Tuesday the class discussed food justice and food access before going to visit Zac and Shane at Colorado Springs Food Rescue (CSFR). This organization is truly remarkable and inspiring. They started just five years ago, redistributing fresh food from grocery stores to the considerable portion of our city that has no access to grocery stores in their neighborhood and little access to a car. They have to rely on a bad public transportation system if they do not have a car to buy groceries for their family. With not much money, long work hours, high rents, low incomes, and lots of stress, the South East side of the city has poor health outcomes, not great diets, and few opportunities. CSFR is working on changing that. They have redistributed over $5 million worth of fresh food and serviced 13,000 residents. They have food redistribution centers in schools, rv parks, and community centers. CSFR goes beyond redistributing food by addressing the systemic issues that cause such dramatic inequality and by empowering those communities to take their food and future into their own hands. Instead of a paternalistic charity model, CSFR works with the community which is largely LatinX and African American. They employ high school students to really think about and question the food system as it exists today and then to design a self-directed project and to manage a weekly grocery program in their community. These kids are addressing the challenges of attaining food security and food sovereignty. They are also becoming leaders. Recent graduates have accepted full-ride scholarships to impressive universities. Zac was particularly excited about one graduate of their Food Systems Leadership for Youth program who is going to Georgetown University and is determined to become an immigration lawyer. CSFR also has a program called the Farmacy which helps physicians integrate healthy produce into their treatment plans for patients. Doctors can give actionable advice about diet and lifestyle and direct their patients to one of CSFR’s no-cost grocery locations where over 600 families come by for veggies every week. A recent endeavor for CSFR is called Soil Cycle, a composting program championed by Composter-in-Chief Nat Stein. Nat and her team bike around town with this big trailer and picks up compost from people who sign up for it. You can also drop off your compost if you live outside of their pick up zone. Soil Cycle is CSFR’s first enterprise and they make a small profit off of it. Beyond that, healthy compost is being applied to local gardens to return nutrients to the soil and make local food growing more successful and more nutritious. CSFR’s biggest and newest project is called the Hillside Food Hub. They will build a community center for education, events, and cooking. There will be a four-season greenhouse, an outdoor farm plot, educational gardens, a space for the indigenous members of the community, and a compost park. It is very exciting stuff and they plan to break ground next March and cut the tape in October 2020. CSFR is transforming Colorado Spring’s food system and addressing some of the systemic problems perpetuated by and encompassing the food system. Their impact is only growing and they are proof that an organization designed intentionally and correctly has the potential to enact real, positive change. Go check them out. 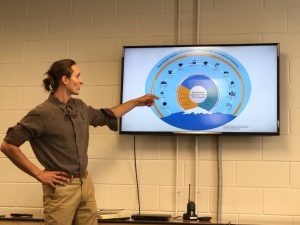 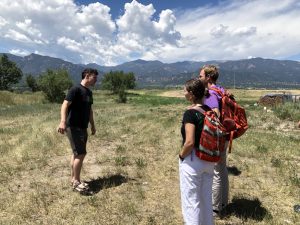 Shane Lory of CSFR at the Hillside Food Hub site

I am a rising senior, majoring in anthropology. I have a keen interest in the political, cultural, economic, and environmental consequences of agriculture, among many other things. I am currently working on my thesis, 'an anthropology of regenerative agriculture in Colorado' and will be visiting 40 odd farms across the state this summer. I am from downtown Chicago and I run and scramble up and down mountains quite a lot.