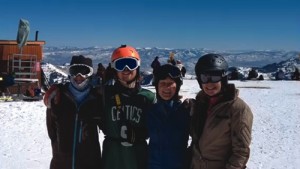 Mothers of CC alumni and current students gathered for a day of skiing at Snowbird, Utah; from left, Darcie Watson (mother of Case ’08), Reed Synderman ’13,Sara Synderman, and Judith Danforth (mother of Sophie ’09).

Cynthia Lowen wrote and produced “Bully,” an acclaimed documentary that looks at adolescent cruelty and adult paralysis in the public schools. The film weaves together five stories from different parts of the country, including grieving families of boys who committed suicide. Cynthia’s work has been published in journals including A Public Space, Best New Poets 2008, Boston Review, Provincetown Arts, and Tin House.

Cally Bartley is living in Denver, where she and her husband, John Van Pelt ’04, are renovating a 111-year-old house. Cally is a nurse practitioner in the dermatology department at the University of Colorado Hospital. John is a process engineer and just received his master’s in chemical engineering from Columbia University. • Matthew Fry has been named a partner in the St. Louis law firm of Rosenblum, Schwartz, Rogers, & Glass P.C. The firm is one of the largest in the country devoted solely to representing people in criminal cases and investigations. Matthew graduated from St. Louis University Law School in 2005 and was previously an associate attorney with the firm where he is now partner. 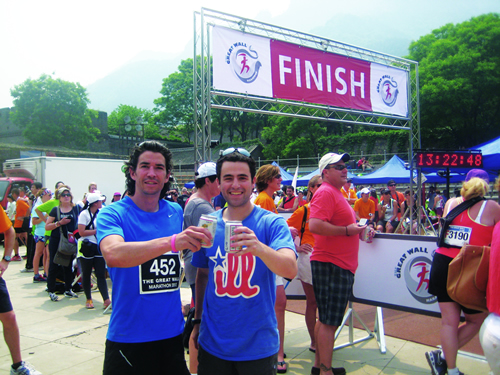 CC Alumni, David Hoven ’06 and Max Stein ’11 both participated in the 2012 Great Wall run on May 19, 2012, David in the marathon and Max in the half marathon. They did very well. Dave came in 13th overall out of 593 participants. Max came in 4th out of 921 participants. David was in China because he started a company called Wild Blue Export Development in September of 2011, at which time they were awarded a contract to help a U.S-based manufacturer of industrial equipment develop an export market and distribution network in China. He went there to work on that contract for a five-month period from late January to early June. It was during the first month of his stay here that he heard about the NGO Prevention Through Education and thus decided to take part in the marathon. David took a leave of absence from his MBA classes at DU, resumed with the last of his coursework in June, and will graduate in November 2012. David is receiving the 2012 Outstanding Student of the Year, awarded by the Advisory Board of the Daniels School of Business for the International MBA program at DU.

Business for the International MBA program at University of Denver. He ran the Prevention Through Education Great Wall Marathon in China in May. • Malcolm Murray’s film, “Bad Posture,” has received accolades from film festivals around the world: “Malcolm Murray has succeeded in doing what many set out to do, but few actually accomplish: to make a cool and intelligent movie for young people (Hammer to Nail: Top 10 Films of 2011); “A calmly assured, generally delightful narrative debut” (The New York Times); and “Filled with some of the driest, sometimes almost undetectable dark humor I have ever seen in a film” (The Village Voice).

Jessica Waclawski and Jessica Pickett-Lyons ’06 trained together for their first marathon, in April in Nashville. The pair raised money for St. Jude’s Children’s Hospital.

Kristin Mikrut is co-owner of a new business venture in Lake Forest, Ill. Kristin and Cecelia Lanyon have opened Re-Invent, a combination art gallery, art studio, and innovative retail shop. After graduating from CC, Kristin moved to Karamea, New Zealand, to work as a professional artist-in-residence and gallery assistant.