From the Medieval to the Modern: Shining Light Through Shove  Chapel’s Stained Glass Windows

It turns out, there are few ideal opportunities during the year to clean and repair Shove Memorial Chapel’s 86-year-old stained glass, but the weeks around Homecoming are a particularly bad time to have plywood placeholders in the windows. It’s one of those management issues that new chaplain Alex Hernandez-Siegel has been dealing with when Classics Professor Owen Cramer and I run into him in early October along the pews in the central part of the chapel known as the nave.

On sabbatical this semester, Cramer has graciously agreed to be my teacher in a very informal Iconography of Shove 101. (Seems I’m not the only one seeking his insight: Hernandez-Siegel also puts in a request with Cramer to be a tour guide for an upcoming event.)

Lucky for us, the glass is still all intact — and more importantly, ready for the Fifty Year Club Induction Ceremony, Homecoming Convocation and Alumni Awards Ceremony, and the annual Memorial Gathering.

When Shove Chapel was dedicated in 1931, CC’s enrollment was in the hundreds. By the mid-1940s, with the inception of the GI Bill, the student population had grown extensively and the pews with their stencil-numbered seats began to fill at weekly services. “If you went to school for four years, you would at least get acquainted with these windows here, at least with the ones that you sat close to,” says Cramer as he points to the north and south sides of the nave.

A total of 10 stained glass windows line these walls, the most visible to chapel visitors. “Charles Christopher Mierow, who was president of the college, was a classical scholar by training — one of my predecessors — but he was also a medieval Christian humanist by vocation. That kind of Christian humanism was most at home in the 12th Century,” says Cramer. “Mierow loved, above all things, the time from about Saint Jerome to the Renaissance.

“This is a cranky place,” says Cramer. “The iconography is really cranky.”

And when it comes to the 10 windows along the nave? “In a way,” he adds, with a laugh, “these are the crankiest of all.”

He’s referring to a heavy-handed portrayal here of the introduction of Christianity into the British Isles. Images featured include Saint Patrick preaching the Gospel at Tarah Hill, Saint George killing the dragon, and Saint Augustine, a missionary to “heathen England,” healing a blind man. It’s a portrayal that was set into place by Eugene Percy Shove, as described by “This Glorious and Transcendant Place” an account of the chapel, published in 1981. 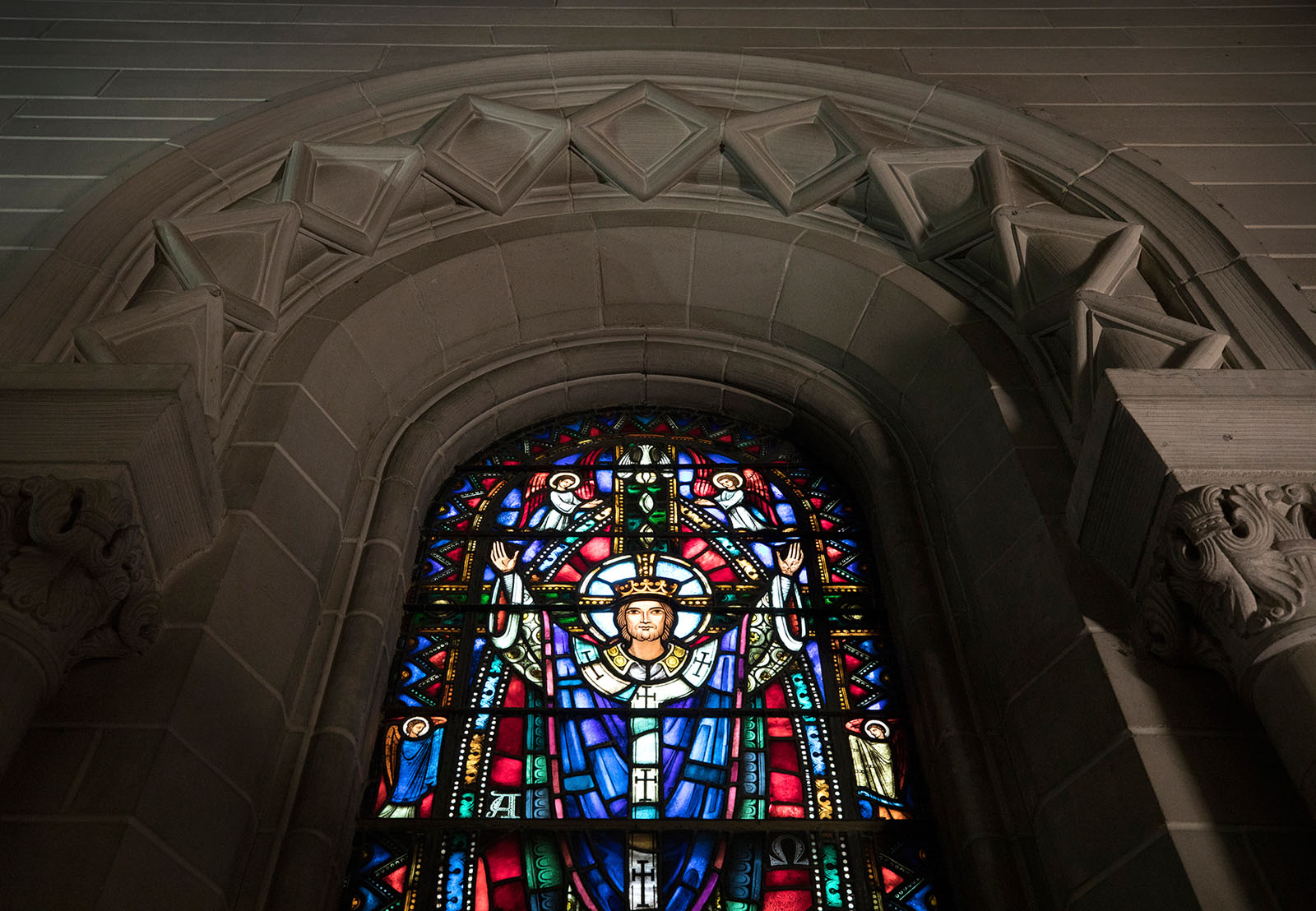 Based on a manuscript by architect John Gray, which was edited by Professor of Political Science Timothy Fuller for print, the book states that the chapel “commemorates, as Mr. [Eugene Percy] Shove wished, his clergymen ancestors both in England and America over a period of four centuries.”

These windows, Cramer says, directly reflect that “Mr. Shove was proud of his English ancestors, and Colorado Springs was ‘Little London.’ [William Jackson] Palmer founded it as kind of a feudal outpost on the frontier. … These learned people put together this program and it’s beautiful, but it’s hard to figure out how to make use of it in a constructive way.

“Since CC is about diversity and inclusion, we do need to think about this. In the lower corner there if you look very closely that’s Saint Patrick bringing the Gospel to Ireland, and driving ‘the snakes’ out. And then we have a green snake and a purple snake and an orange snake. … I mean it’s all just rich with white folks’ ethnic assertiveness about themselves,” says Cramer.

The Carlton Memorial Triple West Window, at the back of the building, is, according to “This Glorious and Transcendant Place,” themed to the “glorification of Christ the teacher.” Christ is the largest and highest image, surrounded by men and angels in pairs including his 12 apostles, Socrates, Aristotle, St. Augustine, St. Thomas Aquinas,
John Calvin, and Immanuel Kant.

“It’s nice,” Cramer says, “because it is beginning to get off of just missionary activity into academic activity. The disciples of Christ are religious figures, but they are known as disciples, which is to say, students.” 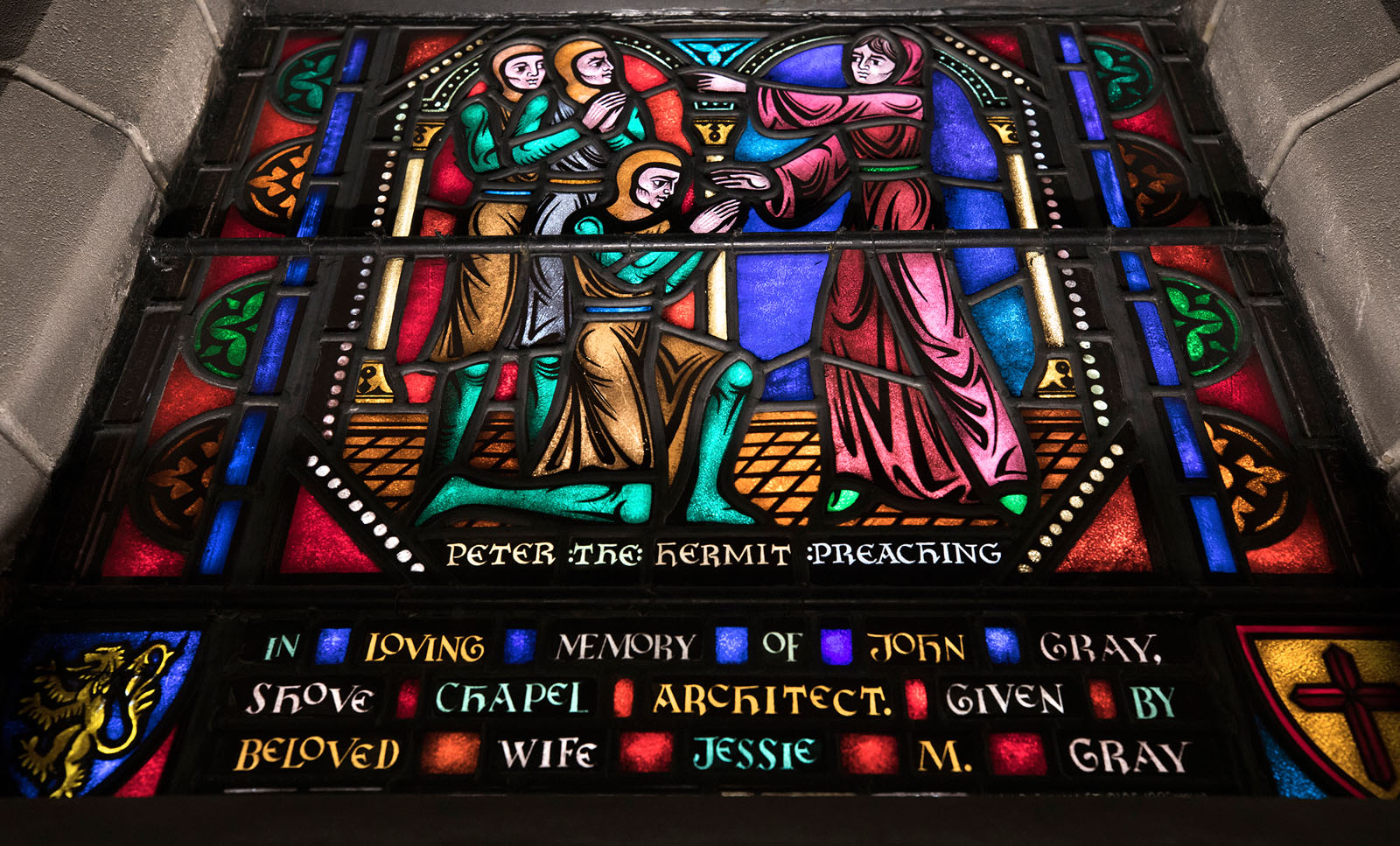 Though the details of them are much more difficult to see due to their placement, the three large windows collectively known as the “Rose Windows” focus more prominently on the college as a place of education. The Chancel Rose window, above the organ, features allegorical figures representing the liberal arts and the major faculties of medieval universities: Christian theology, medicine, grammar, rhetoric, dialectic, arithmetic, geometry, astronomy, music, and law.

“You go to the more fundamentalist part of Christendom and say, ‘We’ve got a stained glass window with Charles Darwin,’ and people would say, ‘Oh, that’s sacrilegious.’ The point is that these guys here thought it fit with the kind of Christian approach to knowledge, which Darwin would have agreed with himself.”

Both of these 20th-century philosophers seem like decent options, but since his question was actually rhetorical, I toss it back at him. 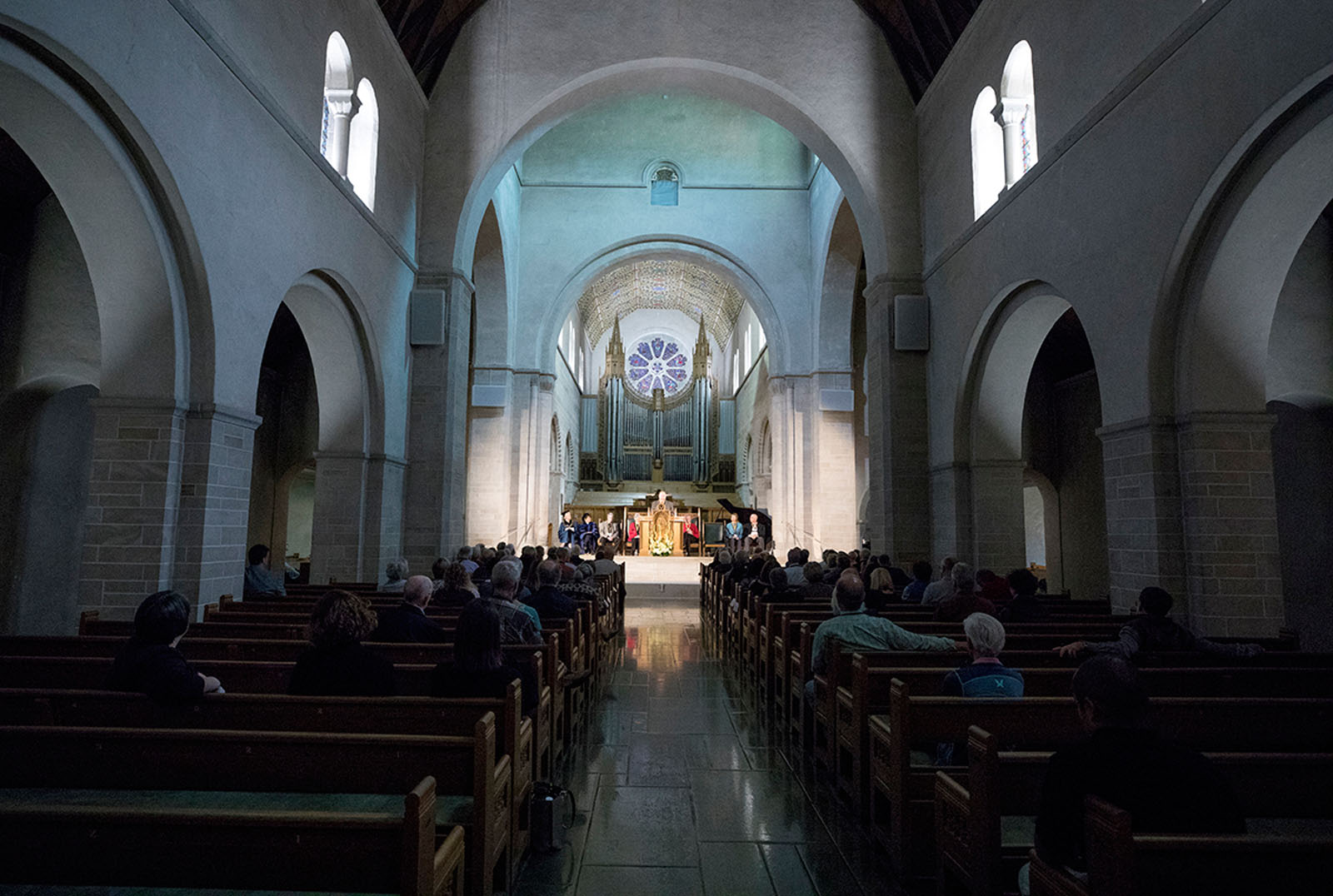 “Well, would Martha Nussbaum want to be in stained glass?” he responds, laughing. “That’s a good question. I don’t know.”

The original idea for these windows was to divide up knowledge, and then have representative characters who functioned within the sciences and the humanities, but he notes that Mierow must not have thought about social sciences. “There are no economists up here. So should we have Adam Smith? And which side should we put Adam Smith on?”

He points out three unadorned windows on the lower level and suggests perhaps the college should consider some new stained glass. “It would be an occasion if somebody wanted to think about decorating these. What else could you do?”

For instance, he adds, “There are all these windows, doing the gospel coming
into England, but not into Colorado. And there’s nothing in here about the Southwest heritage.”

“It all needs exegesis and criticism,” he says, “but that’s okay, that’s what a liberal arts college is for.” 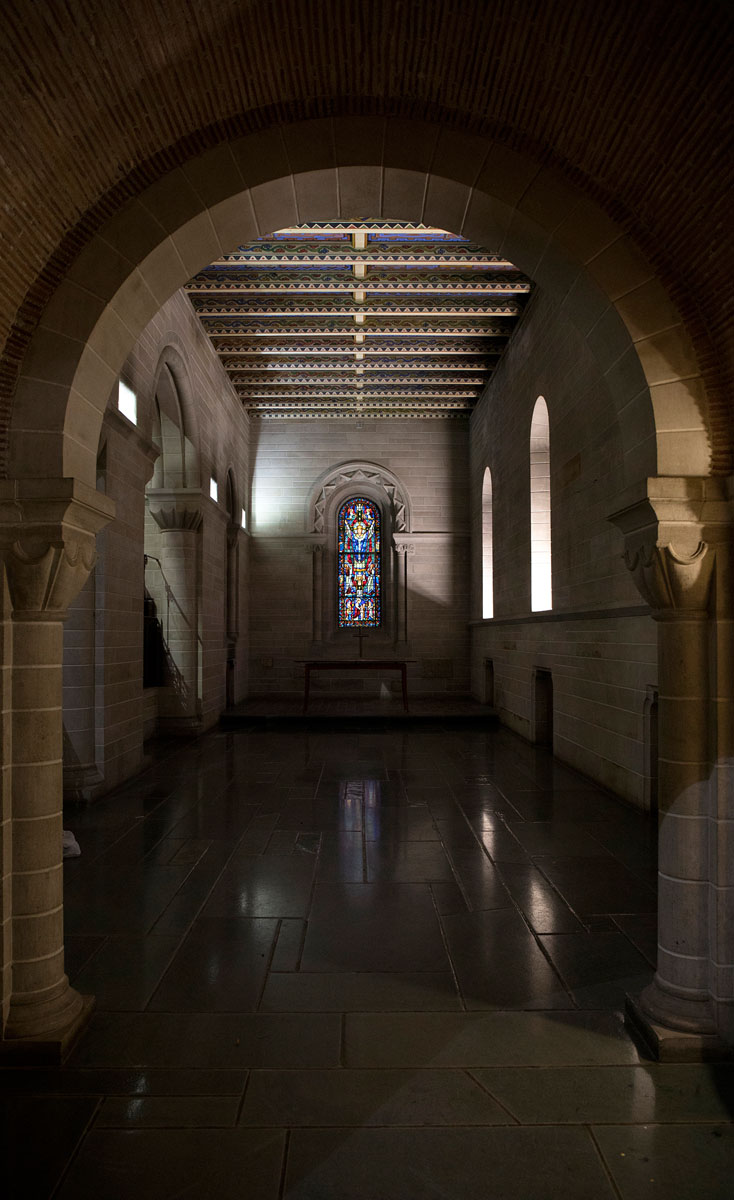 To read “The Glorious and Transcendant Place,” edited by Timothy Fuller, in its entirety, and to see a map of the chapel and close-ups of all the windows with their individual descriptions: 2cc.co/shovebooklet