Building on last year’s Day of Service, the CCE organized a new, expanded, Week of Action, this fall. Starting with a Community Picnic for Family and Friends Weekend on September 29th, the week was jammed packed with events to help connect CC students to the community around them. The goal for the Week of Action was to provide multiple avenues for students to get involved in a way that was meaningful to them. Last year, the CCE focused on one large clean up of Monument Creek. “We then expanded our thinking to a Week of Action to be able to incorporate a variety of opportunities for students, staff and faculty to engage” states Niki Sosa, the CCE’s Community Partnership Coordinator and organizer of the Week of Action. “With a week, we are able to create a variety of diverse opportunities, while including the Creek Week Clean Up event.” 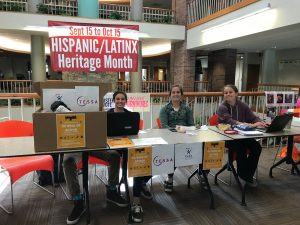 Students kick off the week by collecting donations for the Athletics Drive.

On Monday, October 1st, the CCE hosted an Engagement Fair, giving students the opportunity to meet with representatives from 17 different local non-profits and find out more about organizations in the area. This was followed with two more events that day, Habitat for Humanity Restore and Toward a Daily Anti-Racist Agenda Workshop. Habitat for Humanity Restore hosted an event for a group of volunteers to assist with projects for the organization. Hosted by CC’s own Butler Center, the Toward a Daily Anti-Racist Agenda Workshop focused on self-reflection and communication when discussing the repercussions of white supremacy in higher education. The staff showcased a handful of short films and had its participants engage in discussions about their own educational experiences, in terms of bias, identity formation and white culture.

“The first step to making a difference is starting a dialogue,” said one attendee of Monday’s workshop. With the environment provided, students were able to express their opinions and share their experiences freely, while learning from those around them.

Following this, were even more events on Tuesday, October 2nd. The on-campus Refugee Alliance hosted its blockly meeting in the Sacred Grounds, discussing issues relating to refugee assistance. This event was followed by an event, hosted by CC library’s Special Collections staff, titled “Wikipedia Skews White and Male. Let’s Change that Together.”. Within this program, the systematic bias and under-representation of non-Western nor white male populations were addressed and projects to counter this issue were introduced. The group also had the chance to hear from Professor Rebecca Barnes about her work with the Women in STEM project. Events were also held off–campus, including a Concrete Couch Clean-up and a CONO Central Downtown Neighborhood Chat. The Concrete Couch Clean Up was an opportunity to help clean and create impactful art structures. Concrete Couch is an organization from the Pikes Peak region which works to bring people together through constructing art and other local projects. The Downtown Neighborhood Chat gave members of the community a chance to discuss neighborhood issues and solutions with city council members Jill Gaebler and Don Knight. Through initiatives like this, the government is more closely connected to its people and everyone’s voices can be heard.

On Wednesday, October 3rd, TIAA and Leadership Pikes Peak partnered to sponsor and host the LPP staff event, “Experience the Springs”. This gave CC staff the ability to meet with community leaders and explore parts of their own city in a new way. Later that day was the screening of the documentary, Mixed Match. Hosted by the WRC and the CCE, this film reflects on the difficulty which mixed race blood cancer patients face when looking for bone marrow donors and the significance of race in the medical industry. It tells an important yet often unknown story and forces viewers to confront issues that they wouldn’t normally hear about.

Quite fittingly, this screening was followed with a Blood Drive on Thursday, the 4th. Bonfil’s Blood Center and Be The Match came to CC to take blood donations and sign individuals up as potential bone marrow donors. Later that evening was the Fall Harvest Banquet, where the CC Student Farm showcased their locally grown produce through an extravagant meal. Being a ticketed event, the proceeds benefited the student farm’s mission of promoting sustainable local food production in our region. 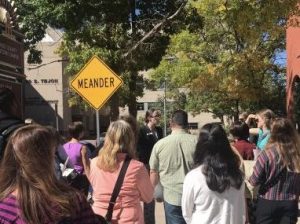 Exploring the city during LPP’s “Experience the Springs”

The week wrapped up with a trio of volunteer opportunities over the weekend: Greccio Housing Beautification Projects on Friday, Creek Week Clean Up on Saturday, and Marian House Soup Kitchen, Sunday morning. With these action-oriented opportunities, students were given the chance to help local communities in different ways.

With 9 intra-campus partners, 11 community organizations and more than 250 CC community members involved, the Week of Action touched upon all bases in the community and was successful in connecting our campus to its surrounding world.

“Big change starts here on the community level,” says Sosa. “It’s in knowing your community and taking action to make the changes you want to see.”