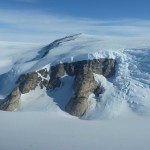 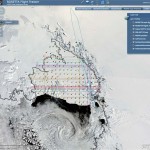 Support is from NSF and USAP

The Ross Ice Shelf in Antarctica is the largest ice shelf in the world, with an areal extent of 487,000 square kilometers, which is slightly larger than the area of the state of California. The Shelf’s average ice thickness is 350 meters, or 1,150 feet. An ice shelf begins where the glacial ice flowing off of the continent goes afloat on the ocean, but is bounded by and anchored to bedrock along its rocky margins, along the coast. Because the Ross Ice Shelf remains connected to ‘land ice’ behind and is attached to the coastal rock alongside, the Shelf is able to slow down, or “buttress,” incoming ice that is transported in to the shelf by the fast-flowing ice streams of West Antarctica. However, because it is floating upon ocean water, the Ross Ice Shelf interacts with ocean water, which has been warming, and is capable of destabilizing the thick, areally extensive ice sheet from below. If this warming is underway and the strength of the Ice Shelf is diminished, there is a likelihood that the Shelf will break up and it no longer will prevent the rapid movement of the West Antarctic Ice Sheet (WAIS) out to sea – a volume of ice that, if melted, would raise global sea level by 3-4 meters. The Ross Ice Shelf has disappeared in the recent geological past during interglacial periods, suggesting that in the future it may disappear again. Hence, during the present time of global warming of Earth’s atmosphere and oceans, it is crucial to obtain in-depth knowledge of the Ross Ice Shelf, its underlying ocean, and the submarine geology.

The ROSETTA investigators bring expertise in glaciology, oceanography, geophysics, information and geospatial technology, and structural geology/tectonics to achieve the objective of an integrated systems framework for the Ross Ice Shelf. They all share a sense of immediacy about joint work to understand the dynamics of the ice shelf—ice sheet—ocean system that has been long stable and still is intact, as it nears a potentially critical juncture due to ocean and atmospheric warming that may affect the system’s stability. At each stage of the investigation, undergraduate and high school students will participate and be trained in cutting-edge research techniques, and educational outreach activities will engage the public through online video and activities that link ROSETTA-Ice science to societal impacts, scientific discovery, and the human history of Antarctic research. The activities will equip a broad array of participants with the tools to gauge the future of the West Antarctic Ice Sheet.

The ROSETTA-ICE survey involves the use of aircraft overflights and airborne instrumentation to acquire gravity, magnetics, radar, and LiDAR data over the Ross Ice Shelf. Field activities will entail ~36 flights on LC-130 aircraft over two field seasons in Antarctica, to be flown by the New York Air National Guard, supported by McMurdo Station’s infrastructure and logistics. Acquisition of the high resolution aerogeophysical data over the Ross Ice Shelf region in Antarctica will be achieved using Lamont-Doherty’s IcePod sensor suite mounted externally on an LC-130 aircraft operating from McMurdo Station, Antarctica.

The gravity and magnetics data will be used to characterize and map the geology of material at and below the seabed, determine the water depth, and calculate the shape of the “ocean cavity” beneath the ice shelf– parameters that will reveal the degree of sub-shelf circulation of ocean water. The geological data will resolve questions about the geotectonic evolution of the Ross Ice Shelf Region, that encompasses a large, poorly known sector of the West Antarctic Rift system.  The radar, LIDAR and imagery systems will be used to map variations in the thickness of shelf ice and its fine internal structure, with respect to crevasses, channels, debris, surface accumulation and distribution of marine ice. The comprehensive benchmark data sets acquired will enable broad, interdisciplinary analyses and modeling, to be performed as part of the project. An online data visualization tool that renders the systems framework will allow users to undertake comparisons between ROSETTA’s new 2015-2017 data, 1970s archival Ross ice shelf data, WAIS data and 1997-2009 SAR data. ROSETTA outreach will bring this visualization tool to students and young investigators, equipping them with new capabilities for the study of critical earth systems that influence global climate.

These products to be derived from ROSETTA-ICE data collection will allow investigators to better predict how the Ross Ice Shelf will respond to changing climate, and therefore how the WAIS will behave in the future. A recent animation by Feldman and Levermann (2015) is linked here: 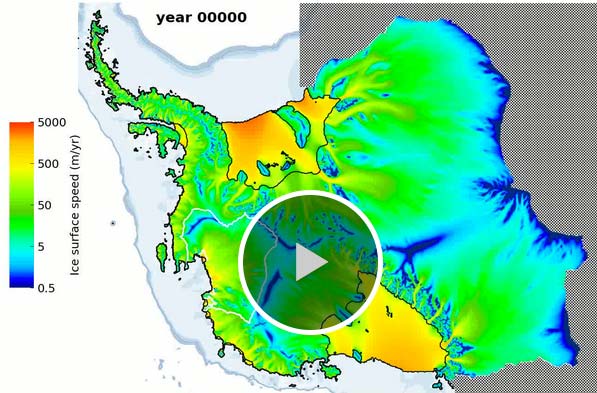