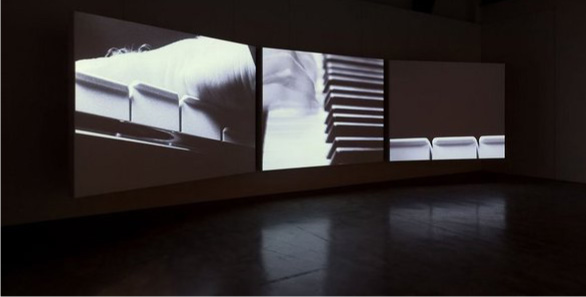 “It is important for me to understand the disciplines of contemporary art without boundaries or constraints.” Idris Khan

Multi-media artist Idris Khan creates photographic and video works that blur the boundaries between appropriation and re-creation to challenge the viewer’s assumptions about how different art forms are received and understood. His three-channel video installation, Last 3 Piano Sonatas…after Franz Schubert, engages elements of video, recorded music, and live performance to deconstruct and re-frame the sensory experience of musical performance.

Known for his works based on historical figures such as Caravaggio, Bach, and Freud, many of Khan’s projects involve layering images, texts, or sounds produced by an iconic historical figure to create a composite “portrait”. Last 3 Piano Sonatas…after Franz Schubert was inspired by the music Schubert wrote on his deathbed.  To create the video, Khan wove together moments from numerous performances of the Sonatas. Each fragment of film focuses on a different aspect of a performance.  Through the careful editing of images of hands at the keyboards, hammers hitting strings, and the performer’s gestures, Khan creates a visual rhythm that reinforces the power of the composer’s vision while simultaneously uncovering the subtle artistic choices made within different performance contexts. Khan’s video also invites a layered engagement with time: by choosing sonatas that comprise Schubert’s last artistic gesture, Khan conjures a specific and unrepeatable historical event; by blurring the distinctions between different contemporary performances of the sonatas, Khan collapses time into one, persistent moment.