“These are remarkable paintings in terms of an imaginatively beautiful and evocative artistic interpretation of Buddhist imagery.  Not only are they completely accurate in iconography, but also totally creative in their presentation that successfully offers a new ‘western’ way of interpreting the Buddhist icon tradition.” – Dr. Marylin Rhie, Buddhist Art Historian and Professor at Smith College

Mandala of Enlightenment: the Dhyani Buddhas

The Dhyani Buddhas comprise the ten large mixed-media paintings of the five Buddha families used in Tibetan Buddhism as guides to spiritual transformation. The five Buddhas and their duplicate female consorts are to be studied, contemplated, and meditated upon as a method for freeing oneself from the suffering of the human condition. While iconographically accurate per the Tibetan thangka tradition, Bredin-Price’s paintings are the original work of a Western Buddhist practitioner and artist. Her versions illuminate the vision of a strong spiritual feminist by portraying the five female consorts individually and at the same scale as their male partners. The goal of Bredin-Price’s Dhyani Buddhas is to awaken one’s five-nature being through a contemplative practice free of traditional gender bias. Through this awakening, the “poisons” of hatred, ignorance, pride, desire, and jealousy transform into their antidote wisdoms: the wisdom of ultimate reality; mirror-like wisdom; equality; discrimination; and all-accomplishing wisdom.

Available for sale as a set (contact: nancybraxton@gmail.com), the ten paintings can be viewed at www.bredin-price.com. Bredin-Price’s final wish was to find a permanent home for The Dhyani Buddhas: a place where spiritual practitioners and the general  public may experience the celestial  Buddha nature of the five couples.

This section consists of five paintings that depict the female Buddha Tara. Tara is considered to be the embodiment of all of the Buddha’s activities, and is identified as the premier deity of Tibet. Introduced to Tibetan Buddhism in the early 1980s, Bredin-Price became a Green Tara practitioner, which in turn opened an artistic pathway to the creation of numerous images of Tara over a twenty-year period. 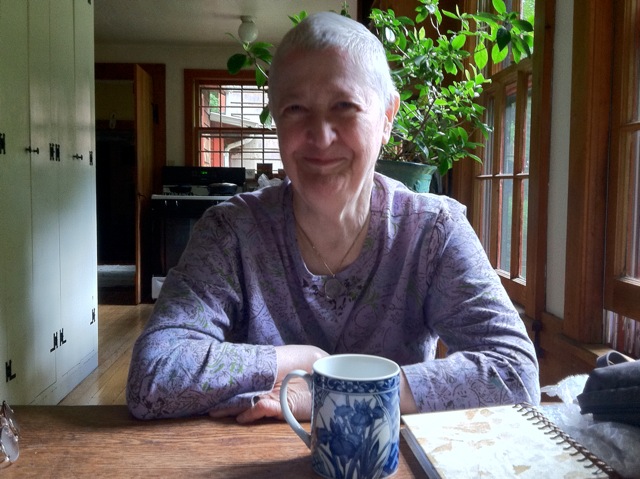 Joan Bredin-Price (1943-2013) grew up in an artistic family; numerous family members belonged to the Pennsylvania Impressionists movement, and their world permeated her youth. She received formal training at Skowhegan School of Painting and Sculpture and earned a BA from the Rhode Island School of Design in 1965. Her paintings, which have mainly centered on the spiritual and the divine feminine, have been shown in the following institutions: Nacul Center Gallery (Amherst, MA); the former North Amherst Center for the Arts; Leverett Gallery (Leverett, MA); Tibet House (NY); the Jannotta Gallery at Smith College (Northampton, MA); and the Frost Library Gallery at Amherst College.