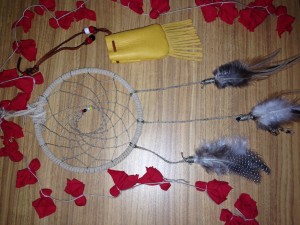 For my final project I wanted to investigate the Lakota crafts in more depth. I was interesting in this topic because of a conversation I had with Jamie while at sweat one night. She told me that she had been trying to arrange a crafting session with our class but was unable to put it together in time. She said that she was going to try and put together a craft session for the next CC class to come to Pine Ridge.

Here is some of the information I found while researching Lakota Crafts:

–       spiritual symbols that aid people in prayer or meditation

–       give prayer and thanks while making the ties

–       the ties are made by wrapping tobacco in a cotton piece of cloth cut into a square (about 2in.), fold the tobacco into the cloth creating a pouch, and then tie them together with string

–       brought to ceremony and left at the sight or burned as an offering of the prayers to the great spirit.

–       Tobacco is used because it is the Lakota’s most sacred plant, used in their ceremonies. Lakota tobacco-Taken from the bark of a red willow tree.

–       “When making a tobacco tie, a person will often use seven pinches of tobacco, one for each of the four directions, one for the earth, one for the creator, and one for the ancestors. “

–       “For instance if a tie is made and then tied to a tree or left in a sacred place, the intentions and prayers of the maker will be absorbed into its surroundings and act as sort of a blessing for the things in touches and for those who come in contact with it. Sometimes the ties are burned, sending those prayers up to the heavens.”

At the end of our last pipe ceremony I hung my prayer ties up in a tree outside of Shove.

–       according to legend: The dream catcher catches all the good in their dreams and visions in the web and is carried with those people for their lives

–       Another theory: the good dreams pass through the center hole to the sleeping person. The bad dreams are trapped in the web, where they perish in the light of the rising sun.

Theories about the parts of the dream catcher:

– original dream catchers were plain with no beads or feathers

Feathers- good thoughts slide down the feathers to the sleeper.

Web- because of the spider from the story : “Use the web to help your people reach their goals, making good use of their ideas, dreams and visions.”

Uses: “Dream catchers were given to new born and or hung on an infant’s cradleboard for good dreams. The larger sizes were hung in lodges, for all to have good dreams.  It is never too late to acquire a dream catcher.”

“Long ago when the word was sound, an old Lakota spiritual leader was on a high mountain and had a vision. In his vision, Iktomi, the great trickster and searcher of wisdom, appeared in the form of a spider. Iktomi spoke to him in a sacred language. As he spoke, Iktomi the spider picked up the elder’s willow hoop which had feathers, horsehair, beads and offerings on it, and began to spin a web. He spoke to the elder about the cycles of life, how we begin our lives as infants, move on through childhood and on to adulthood. Finally we go to old age where we must be taken care of as infants, completing the cycle.

When Iktomi finished speaking, he gave the elder the web and said, The web is a perfect circle with a hole in the center. Use the web to help your people reach their goals, making good use of their ideas, dreams and visions. If you believe in the great spirit, the web will catch your good ideas and the bad ones will go through the hole.

The elder passed on his vision onto the people and now many Indian people have a dream catcher above their bed to sift their dreams and visions. The good is captured in the web of life and carried with the people, but the evil in their dreams drops through the hole in the web and are no longer a part of their lives. It is said the dream catcher holds the destiny of the future.”