Storytelling and the Lakota People

Storytelling has long played a critical role in the shaping of human cultures and societies. The first 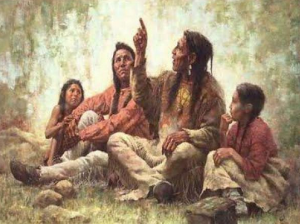 storieswere told as cave paintings found in the Lascaux Caves in France from 15000-13000 BC. The stories depicted on the walls of the cave were used to tell others where to access food sources. As humans became more evolved so did their stories. The first documented written story is the Epic of Gilgamesh from 700 BC, which tells about gods. From Gilgamesh on, stories began to become more complicated. They began to be used to pass down history and culture from generation to generation. Over decades, storytelling has consistently played a very important role in humanity because it is the main way that we pass down information to one another. We saw examples of this at Pine Ridge, places where their cultural traditions had been passed down over generations to create their current way of life. We were intrigued by this awareness of past legends, their strong belief in these lessons, and the focused continuation of religious practices and ways of life, and therefore inspired to learn more about the history of storytelling and the role that it plays in the Lakota way of life.

The setting of a story-telling is most often in the context of a large social gathering of sorts. Requests of stories in these setting usually come with a gift of tobacco. Sometimes individuals seeking knowledge from storytellers can approach them with gifts individually to ask for astory. The audiences of these stories differ. Some are for all people and ages. Others are only for those of a certain age. Others are only for people partaking in special rituals. Additionally, contemporary storytellers may be hesitant to tell stories to outsiders because they fear that the outsider may record the story, thus taking away the storytellers control over who can hear the story. Lastly, in some tribes stories are only told during long winter nights because in one case it is because the plants will stop growing in order to listen if you tell the stories during the winter. In another case it is because they don’t want the stories to be heard by evil animals i.e. frogs or snakes which are in hibernation during the summer.

There are many different and vital purposes to storytelling in indigenous traditions. This is especially important for Native Americans and many other oppressed indigenous peoples. In the case of oppressed people who were forced away from their homeland, they could maintain their connection to their native homeland. For those not moves away from their land, stories contained information regarding how to relate to their land as humans and how to survive by living off of their land. This can be observed by the place-specific monsters that show up in some stories. Relating to culture, storytelling is a way to maintain and hand down language. Also as a part of culture are the morals and ethics that are related through the stories. This can mean tribe pride. This can also include culturally appropriate ways to act in certain situations. Also part of culture is history including creation myths, tribe origin, and family genealogy. Some stories play important parts in rituals. Lastly, stories serve as entertainment for all the people in the tribe. For this reason, the greatest story tellers were those who could tell the story in a way that re-lived the stories in a highly dramatic way.

As is the case for many Native American tribes, the continuation of traditional belief systems and ways of life for the Lakota people has relied primarily on story telling. Through passing down information, history, and ways through voice from generation to generation, younger Lakota tribe members are able to connect with their ancestors and continue important rituals and traditions in order to maintain ancient ways of life. One of the most important and influential stories to the Lakota people, White Buffalo Calf Woman, was referred to throughout our time at Pine Ridge. There are many different versions of this story, perhaps it is important that no one definitive version exists as this has allowed the story to shift and adapt itself to specific people and settings. Perhaps too, without living in the Lakota culture, this story has varied meaning, even lack of significance, for outsiders. 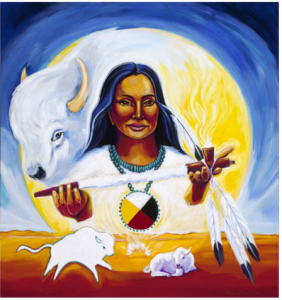 of current Lakota culture stem from this story. Most versions of the story agree that White Buffalo Calf Woman brought the Sacred Pipe, as well as the sun dance, the sweat lodge, the vision quest, and other rituals to the Lakota people. It is said in this story that it was she who taught the Lakota people the ways of the earth, how to walk on the earth, and how to pray. It is said that after the day when White Buffalo Calf Woman visited the buffalo were plentiful, meaning that the Lakota people were able to support themselves. Many interpret this story as saying that one does not need to struggle in order to survive, especially if one incorporates prayer into their lives. By learning to appropriately unite the mundane with the divine, all that will be needed will be provided. This story has further led to cultural distinctions between men and women, including women’s roles, gendered language, and general guidelines suchas the placement of the doors on a sweat lodge. The four sacred colors of the Lakota can also be traced back to this story, as after giving the Lakota people sacred instructions for living, the woman turned into a calf and walked away from the tribe. Each time she laid down to rest, the calf was a different color, four colors which now make up the sacred Lakota hoop.

While the story of White Buffalo Calf Woman plays an important educational and culturalrole in the Lakota culture, there are other stories that focus on healing, humor, history, creation, and so on. These stories are writing the past, living in the present, and preserving the future. These are the lessons that preserve culture and unit the people of Pin 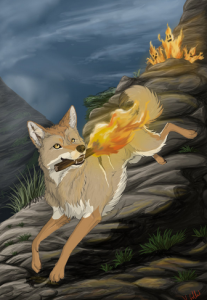 e Ridge. Each night while we were at Pine Ridge, the four of us told stories and talked about how important stories have been in our lives. We end our presentation with one of these stories told by Justin: “Storytelling is multifaceted. Storytellers have trained themselves to capture the essence of a story and then retelling it with their own twist. I grew up loving the storytelling festivals because of the rich history I was able to understand. African history mixed with South American history resulted in stories that excited me. I began telling stories after I heard Brenda Hollingsworth Pickett perform a “John The Conqueror” story. I was mesmerized by the eloquence at which they captivated the audience and I began to practice. The story I told in class surfaced through many years of troubled attempts but its nice to represent my home, New Mexico.”

Questions for the Class: