Before the colonization of the San Francisco area, the bay region was home to 20,000 indigenous residents who spoke up to 60 dialects. Living by the shoreline, these early settlers had significant impact on the geography of the coastline. Large accumulations of shells and other human debris still exist in the Bay Area as a fossil record of these pre-historic residents. The construction of the earliest mounds began 5,000 to 4,000 years ago, when the San Francisco Bay system was beginning to reach its current spatial configuration. During this time, local hunter-gathers were likely attracted to the area due to the incredibly rich tidal marshes and alluvial mudflats forming from the flooding estuary region (Atwater et. al).

Since the arrival of the Spanish in 1776, the legacy of the indigenous peoples of the Bay Region has systematically been destroyed. Both Spanish Missions and government sponsored-bounties during the Gold Rush have dislocated the native peoples from their land. However, the treatment of these shell mounds, the physical legacy of the indigenous people’s presence here, illuminates who has power in discourses about the sacred.

In 1876, part of the Emeryville shell mound was leveled for the construction of a dance pavilion called “Shellmound Park,” where San Franciscans could come to the East Bay to dance, as one historian points out, literally on the graves of the Ohlone Indians (DelVicchio). In the following two decades an amusement park with two rides were built beside the pavilion. However, it is largely believed that these older construction techniques did little disturb the sub surface fossil record at the site.

During 1901-1924, as the University of Berkeley Anthropology department came into existence, an extensive archaeological survey was conducted to identify and locate all shell mounds in the San Francisco Bay Region. Although urban expansion, mound-removal, and mining and agricultural run-off had already significantly impacted the surrounding geography, over 425 mound sites were still identified during this survey process (Luby et. al, p. 194). These mounds ranged from 30 to 600 feet in diameter, and stood anywhere from 3 to 60 feet tall. Some mounds were also documented to have deposits that extended several yards below sea level. The composition of these sites also differed greatly. Mounds along the bay were made up primarily of bay mussels, clams, oysters, other shells, and clay deposits. Moving inland along the Sacramento delta, the ratio of shellfish declined until the mounds were made up primarily of sand, ash, and rocks (Luby et. al).

When archeologists first began to excavate the Shell mounds in 1901, these sites were largely thought to be used as only “middens,” or heaps of refuse from nearby fishing, hunting, and shellfish gathering (Nelson, 1910). Burial in the sites in the mounds was a mere afterthought, only considered by archaeologists at all because the loose soil provided an easy location to dig graves. But as Nelson and his colleagues dug into the mounds, they discovered many layers of human and non-human burial sites, indicating the continued use of the Emeryville shell mound as a ceremonial ground throughout its 3,000 year development. Groups of typically 6-9 people suggested the use of the grounds as family burial plots, while buried formal artifacts, fowl, seals, Tule-elk, and other game suggested the use of the mounds as ceremonial grounds where sacrificial offerings were made.[1] During this time, over 600 bodies were taken from the site (DelVicchio). It is estimated that several thousand people were buried at the Emeryville shell mound in total (Nelson).

Southern face of the Emeryville shell mound, taken in 1924 while the mound was being leveled for the construction of the paint and pesticides factories (Hearst).

In 1924, Archaeological research at the Emeryville shell mound was halted for the development of paint and pesticide factories. In order to level the ground for the construction of these buildings’ foundations, large portions of the mound were removed. These factories remained in operation until they were shut down and destroyed in the 1990’s. Several particularly heavy rain seasons unearthed the soil below where the factories had been leeching harmful chemicals for some 70 years and toxic runoff began polluting the bay. The city of Emeryville mitigated this pollution by digging holding pools to stop the runoff.  In this process, they rediscovered the shell mound, previously thought to be completely destroyed. For a short period of time, archaeological research resumed (Luby et. al). The city of Emeryville also contracted the American Native Heritage Association (ANHA). The ANHA, and appointed a “most likely descendant” of the decease buried at the Emeryville shell mound, Kathy Perez. Perez instructed to keep the bodies in the ground, and to do what possible to keep these gravesites in tact.

In the late 1990’s, Madison Marquette, a development group began taking interest in the site. After proposing a 400,000 square foot entertainment and shopping corridor, called ‘Bay Street’, to the city of Emeryvillle, the city awared the group $114 worth of subsidies assist the project. During the construction of the Bay Street Mall, construction workers unearthed hundreds of more bodies, many rubberized from exposure to arsenic-laced sludge. About 300 of these bodies were reburied in an unmarked grave on the mall site, some 100 of which were taken from what later-became the parking lot behind a victoria’s secret store. Nobody is entirely sure how many more bodies were remain under the mall, nor how many bodies were trucked off to a landfill during the toxic waste cleanup and construction of the Bay St. development (DelVicchio). Although several internet blogs accuse the city of Emeryville of firing archaeologists and making subversive decisions behind closed doors, no academic or news sources make any such claims. Furthermore, there seems to be gap in the research about how locals initially responded to the development plans, and if the city ever solicited public feedback.

Archaeological analysis of the Emeryville mounds and others from the late 1990’s suggests more complex uses of the sites than simple waste grounds where burials were made convenient. Fossil records discovered in this decade indicate the possible presence of full-service villages built on top of the mound, suggesting deliberate placement and construction of the mounds, in contrast to the more passive narrative of shell accumulation. This explanation parallels the use of other shell mounds found in the American Southeast and Mid-West, where shell mounds intentionally constructed as specialized cemeteries and ceremonial grounds where burial rites as well as feasts, political meetings, and dances were hosted (Luby, 2004). However, because the many surface layers of these sites that would show depressions in the land where structures may have stood, and many of the other shell mounds have been destroyed, such as the Emeryville shellmound, has been destroyed nearly completely, these interpretations are made using piecemeal findings from many different sites.

Thus, much about of the uses of shell mounds remain inconclusive. It is uncertain whether or not they were constructed intentionally or a result of coincidental waste accumulation. It is uncertain whether or not these spaces were used only as ceremonial and burial grounds, or as full-service villages. It is still uncertain how seasonal usage of these ceremonial or full-village spaces changed. And finally, it is uncertain how exactly different mounds in each mound cluster were used, as well as the significance of the larger, older central mounds. Given the degradation of these spaces, it is unclear whether any of these questions will ever be answered.

Amidst competing archaeological claims about the historic uses of the site, a dynamic discourse about the cultural significance of this once-sacred site unfolds. At the entrance to the Bay Street shopping mall, one can find a “visual sectional window,” where a portion of one of the central mound remains in tact. The Bay St. websites also boasts the existence of a historic timeline, and a ground surfaces that highlight the natural and cultural history of the area. According to the Bay Street website, this interpretive space offers “a place where people can gather with others or peacefully reflect. Most importantly this place is an interactive educational experience that invokes thought and understanding about the lives of the Ohlone peoples ”(Madison Marquette). However, the only sort of gathering done in this space seems to be in protest of the mall. Several Ohlone interviewees have stated that they are too appalled by the Bay St. development to visit to the memorial ground (DelVicchio). In this interpretive space, there is absolutely no mention of dead buried below the mall, nor the bodies removed from the space during construction.

In protest of the development, every year since 2003, the Indian People Organizing for Change have hosted a protest of the “Dead Mall” on black Friday (Hedgecoke). Protestors conduct a shell mound walk, with the intention of educating visitors about the burial ground beneath the mall. To this day, the shell mound memorial makes no mention of the bodies removed from this burial ground. 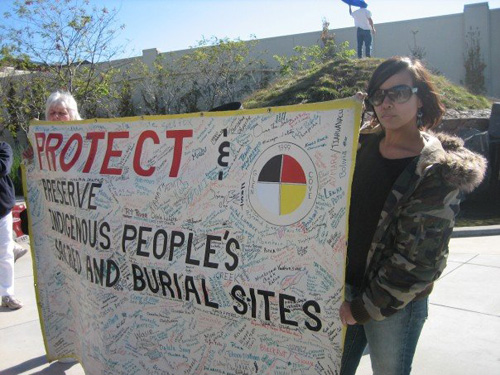 Protestors Gather in front of the shell mound memorial (Sacredland.org)

The Emeryville shell mound proves to be a useful case study of how discourses about space can silence indigenous voices in favor of economic interests. As Michel Foucault stated, “space is fundamental in any exercise of power,” (p. 252). In other words, power is established and reaffirmed in any production of space. To that end, the treatment of the Emeryville shell mound exemplifies how the colonialism continues in the 21st century.

Given the economic success of the Bay Street development, the Madison Marquette development group is now proposing to expand the sire two blocks north (into the empty lot below Powell St.). The developers have already requested a $47 million subsidy from the city of Emeryville. However, local activism groups, such as the East Bay Alliance for a Sustainable Economy, are extremely upset about this. They complain that this shopping mall, comprised of stores mostly owned by multi-national corporations, only provides services for outsiders in exchange for low-paying jobs, traffic congestion, and displacement in the local community (EBASE).

[1] Changes in the size and density of faunal deposits and sacrificial offerings have also been used to document over-harvesting and over-hunting trends in the bay region as a result of population growth along the shoreline in the late pre-historic era (Broughton).