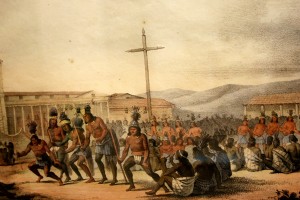 Sogorea Te is a sacred Indigenous tribe burial site just north of the Carquinez Strait in Glen Cove, California.  This site is home to many preserved remains and artifacts from the local native people (Gould, 2009).  The site was used for ceremony and as a meeting point for the many nearby indigenous tribes who lived near Glen Cove for hundreds of years before Spanish invasion and subsequent colonization in the 18th century (Gould 2009; Milliken, 1995).  From historical accounts, it seems likely that the remains and artifacts of the Ohlone and Wintun tribes remain buried underneath many acres of waterfront property in Glen Cove (Milliken, 1995).

For the last decade, there has been significant conflict over the best use of this sacred site.  Ever since 1988, the Greater Vallejo Recreation District (GVRD) wanted to develop this land into a state park with parking lots, lights, and toilets to allow greater accessibility (Kent and associates, 2007).  In the environmental impact report (EIR) prepared by the GVRD to evaluate the impact of their proposed changes, they recognized that there were valuable cultural assets buried in the park that could affect their planning.  Here is the EIR in full: www.gvrd.org/files/GlenCoveFinalEIR0907.pdf  Therefore, the GVRD contacted the California Native American Heritage Commission to assist with protecting valuable cultural resources (2007).  This is a government agency that is responsible for “identifying and cataloging Native American resources.”  The agency is also “authorized to act in order to prevent damage to, and insure Native American access to sacred sites” (NAHC, 2013).  The procedure that the NAHC uses to achieve these substantive aims involves identifying a most likely descendant (MLD).  This person is the descendant who, in the agencies opinion, is most likely to have lived and used the land in the past.  The designation grants the MLD legal authority regarding the treatment and disposition of discovered remains (NAHC, 2013).

The NAHC identified a member of the Patwin tribe to be the MLD during the EIR process, even though historically, the Ohlone tribe is most likely to have remains buried at Glen Cove (Burchyns, 2011).  This is because the Ohlone is not a federally recognized tribe, so they do not have standing to advise the NAHC on how to proceed with the project (Federal Register Vol. 87 No. 78, 2013).  Therefore, the NAHC had to nominate as MLD a member of a tribe that they thought historically owned the land, even though there are no remains of members of the Patwin tribe at Sogorea Te.  This quickly led to tension between the Ohlone and Patwin tribes, because the tribe responsible for advising the GVRD how to proceed had no felt connection with the land.

The cause of the tension was primarily due to differing ideas of how much development is permissible for this sacred site.  The GVRD, under the guidance of the MLD decided that a hill near the Western part of the park will be regarded, and some of this soil will be spread as a one to two foot cap on the burial grounds.  In addition, vacant houses would be demolished and parking lots, trails and restrooms would be constructed (Pressley, n.d).  The Ohlone tribe felt that the machines necessary to achieve these improvements would run the risk of destroying many remains and artifacts in the soil, that the soil cap was not necessary, and that restrooms on a sacred site is disrespectful and a desecration (Gould, 2009).  The GVRD ignored these tribes’ concerns and decided to start improvements on April 15, 2011.  On April 11, 2011, a group of indigenous people whose ancestors may be buried in Sagorea Te, filed a civil complaint on the basis of racial discrimination against the GVRD.  Here is the complaint in full: protectglencove.org/wp…/04/Glen_Cove_Civil_Rights_Complaint.pdf‎  They argued that the sacred land is integral to the indigenous way of life to many tribes in the surrounding areas, and that previous archeological studies showed that even the most careful construction methods used by GVRD cannot eliminate the risk of destroying remains or artifacts.  Therefore, by not considering the impact that the GVRD’s proposed actions will have on these tribes’ way of life, the GVRD is discriminating against a minority group, which is illegal under CGC s 11135 (de Ocampo, 2011).

On April 15, 2011, members of the Ohlone and Miwok tribes camped out on Sagorea Te in peaceful protest in order to delay the GVRD in carrying out their project.  This protest lasted for 3 months.  Finally, on July 21, the protest ended when a compromise was reached between the MLD and the protestors.  The GVRD agreed to a smaller parking lot, no restroom, and extra provisions for care when regrading the hillside (York, 2011).  However, this compromise was not universally accepted, as some constituents still consider any alteration of the natural land a desecration, and do not believe any compromise on sacred and spiritual issues is worthwhile (Da Costa, 2013).  In addition, in recent years, the GVRD has not followed through with some of the compromises that were offered.  For example, instead of the agreed upon two parking spaces, six were constructed (Dadigan, 2013). 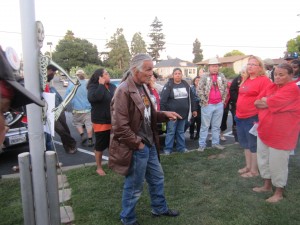 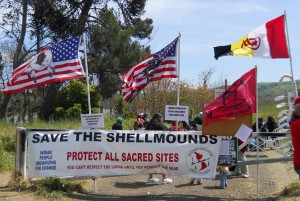 There are several issues regarding the relationship between indigenous tribes’ understanding of land, and the dominant cultures understanding of land when we consider the above history.  It is not too far of a stretch to say that the conflict was unsuccessfully resolved.  While a compromise was reached, the compromise still represented a huge stretching of indigenous tribes’ ideals to allow for alteration of a sacred site at all.  When the GVRD decided to reconsider some of the concessions they had made in 2012, this left the Ohlone and Miwok tribes with scant compensation for their efforts.  By looking for causes in the way this case study progressed, we may discern three reasons why the Ohlone and Miwok tribes walked away unsatisfied.  These reasons reflect a lack of cultural understanding or bridges between tribal culture and dominant Western culture.

First, the current legal system is set up such that these particular indigenous tribes are at a systemic disadvantage and have less power than stage agencies.  If the group is not recognized federally as an indigenous tribe, the scant protection that the government has set in place for indigenous people no longer applies.  This is why the Ohlone could not fall back on federal legislation such as the American Indian Religious Freedom Act, which provides the government with a legal obligation to protect Native American religion and spirituality(AIRF, 1978). It would be more sensible if the intertribal council of elders or another indigenous group worked with the federal government to determine indigenous tribe standing.  The federal government does not care one way or another which tribes are granted standing, so it is easy for the government to not give this issue the attention it deserves and overlook some tribes deserving of standing.  While the intertribal council of elders may not have a direct investment in granting particular tribes standing, they at least empathize with the systemic oppression that all indigenous peoples have to endure in the U.S and that the government has historically supported.  This group may then be more understanding about specific requests of indigenous people to receive tribal status.

A related issue to the issue of tribal standing is the issue of power.  Tribes with standing have more power than tribes without because the government will then, at least in theory, consider protecting them legally.  However, all indigenous groups are at a disadvantage in the legal system because they as the prosecutor have the burden of proof.  In the case of Glen Cove, the federal agency did what it wanted to do regardless of the tribes’ complaints.  Therefore, the tribes must prove that their spirituality is being impacted to halt the agency plans rather than the other way around.  If the indigenous tribes’ values were truly considered equal to the dominant culture, the GVRD would not simply be able to go ahead with its plan while a civil lawsuit was being resolved.  The burden of proof should not always rest on indigenous people in the legal system.  This change is especially needed when we consider that these tribes should have sovereign status from a historical perspective.

Lastly, when the legal system breaks down, compromise and cooperation is all that is left to indigenous people.  This is especially difficult when the two groups do not understand the cultural context that the other comes from.  Both in the legal system and in non-legal compromise, there is a lack of understanding in Western culture about how religion could be tied to a specific place simply because in Western culture, religion is often not tied to the land (Michaelson, 1984).  We can see in this case, that the cultural disconnect forced both parties to move away from trying to communicate with the other party and focusing on what their legal right was.  The GVRD exercised their power by moving forward with their plan, and the Ohlone and Miwok tribes exercised theirs by staging a peaceful protest.  Each stakeholder in April was not concerned with communication so much as making a statement, although communication eventually occurred because of the stalemate in which the stakeholders found themselves.  This lack of communication and understanding is also evident between the Patwin tribe and the other indigenous tribes with a more felt connection to the sacred site.  Corina Gould, a member of the Ohlone tribe makes the claim that the MLD was coerced financially to accept the development that the GVRD proposed (Gould, 2009).  By accepting the Western economical understanding of land over the Ohlone and Miwok tribes’ understanding, the MLD tacitly supported that the way to resolve the conflict was to focus on legal right and not respect.  The MLD made statements such as “all tribes support this development” on the basis that the Ohlone was not a recognized tribe (Burchyns, 2011).  Underlying this statement is the assumption that because the Ohlone have no legal right to hold onto the sacred site, their view is not worthy of respect.  Moving from a method of conflict resolution based on respect and not on right is necessary when the legal system does not protect indigenous groups.

In conclusion, the Glen Cove dispute is far from over, though there has been far less coverage of the ongoing struggles of the Ohlone and Miwok tribes after the protest in 2011.  These tribes are left without legal or social recourse and in some cases are clearly very angry toward the government and the MLD (Gould, 2013; Da Costa, 2013).  By reconsidering which tribes are worthy of legal standing, or by engaging with these tribes from a respect framework, rather than a rights framework, we may be able to provide recourse to two tribes who are not satisfied with the compromise in 2011.

DeOcampo, Norman. Complaint Under California Government Code s 11135 Alleging Violations of the Civil Rights of American Indians by the City of Vallejo and the Greater Vallejo Recreation District. SSP&RRT, 2011.