The Valmont Butte is located on the eastern side of Boulder County in Colorado. In order to understand the history of the sacred land, it is important to have background understanding of the people that made this land their home and place of religious and spiritual practice. The Arapaho Tribe, specifically the Southern Arapaho understood this land as their homeland before a treaty signed in 1867 and 1869 forced the Arapaho to move from their land to land in west-central Oklahoma (The Arapaho Project). The signing of the treaties in 1867 and 1869 were the result of a long series of events including the division of the Arapaho Tribe in a north-south manner demarcated by the Arkansas and North Platte Rivers, the construction of tribal boundaries enforced by the Ft. Laramie Treaty of 1851, and the Sand Creek Massacre in 1864 (The Arapaho Project). The Sand Creek Massacre was an attack on a camp of Arapaho and Cheyenne people in the southeastern part of Colorado by the Colorado militia, even though the camp had white flags of truce raised and was displaying no threat. This is the historical context of the land and the people for the purpose of this research on the sacredness of the Valmont Butte.

The Valmont Butte is located east of the Flat Irons outside of Boulder. It is a volcanic dyke, running east to west, as the formation reaches toward the sky. East of the butte, the view opens up to vast plains, void of development.  With limited access to open space and a growing population, the city of Boulder struggles to find an efficient way to process solid human waste. In 2000, the land surrounding the butte was purchased with the idea in mind to construct a composting plant, in addition to the other disposal and energy plants (White). A portion of the 104 acres surrounding the butte was also going to be developed into a firefighter training center (White). The current residents of the area strongly opposed this proposal for several reasons, one being the multiple burial sites near the butte. Not only is the area surrounding the butte the resting place of American Indian remains, predominantly Arapaho, the area is also the resting place of early European settlers. This dynamic has created an interesting alliance between the Arapaho Nation and the Euro-American residents of the area (White). The descendants of peoples who forced the Arapaho from their land are acting in the role of ally, understanding the significance and sacredness of burial sites and sacred claims to land.

While the majority of American Indian activity happened in the 1800s, prior to the Euro-American settlers looking for metals to mine and land to settle, the butte has more recently been a site of sacred practice. Nick Halsey, a Lakota man, was trained to be the caretaker of a sweat lodge housed on the butte that was a destination for people of many tribal affiliations to participate in vision quests, inipi ceremonies, and other religious practice (White). Halsey hopes to bring in medicine men and other tribal officials to stress the importance of maintaining, and improving, the current open state of the 104 open acres surrounding the Valmont Butte (White).

The Boulder area provided a draw for early settlers with the prospect of “striking it rich” through the mining of gold and coal found in the area. With this boom, the Valmont Butte became the home of one of the first floatation mills in the area. With the milling of heavy metals from the mined rocks, the production of radioactive and toxic waste was disposed back into the soil of the butte. Not only did this contaminate the burial sites of the Arapaho people, it also posed serious health risks to some of the American Indian people who have been using the butte more recently for ceremonies.

Robert Cross, a Lakota Sioux spiritual leader, conducted ceremonies on the butte, including vision quests and the use of a sweat lodge with rocks collected from the surrounding area, until 2007. The disposal of mill tailings in conjunction with the radioactive nature of the basaltic rocks raised concern about the safety and health of those participating in ceremonies on the butte (Berry, “Sacred Sites Preserved but Ceremonies Affected). Cross refers to the contamination of the butte through the mining that occurred in the 1800s, “a national tragedy—they didn’t tell Indian people about it. And other ceremonial sites in Colorado are contaminated.” The contamination of this sacred butte probably occurred shortly after the Arapaho people were moved from their land in Colorado to the land they were forced to relocate to in Oklahoma. Not only was there no forethought on the possible impacts of dumping heavy metal bi-product back into the soil, there was a belief that the land no longer had any ties to the Arapaho people.

After the Arapaho people were forced to relocate, the Euro-American understanding of land ownership constructed the land as no longer holding meaning for the people who once called it home. The western expansion problematized the indigenous title to the land because the legal standard of Euro-American thought is not compatible with the indigenous conception of land (Berry, “Preservation Concerns at Colorado Sacred Site”). This becomes evident when examining the frequent misunderstanding regarding the boundary of sacred land.

When looking at the Valmont Butte today, it may be hard to imagine the impact of such a geological landmark, aside from the rugged beauty is manifests. The butte is a volcanic dyke that runs east to west, pointing to another sacred site, Sugarloaf, and rises above the surrounding plains. It also is situated above the confluence of two rivers, which also give spiritual significance to the area of the butte. Before settlement and the establishment of an urban sprawl, the butte probably appeared to be akin to a monument, reaching toward the vast sky. This site was probably considered similar to an axis mundi, serving as a connection between the underworld, the earth, and the sky. The Valmont Butte was a gathering place and center of travel for many American Indian tribes, giving many access and responsibility to the land. 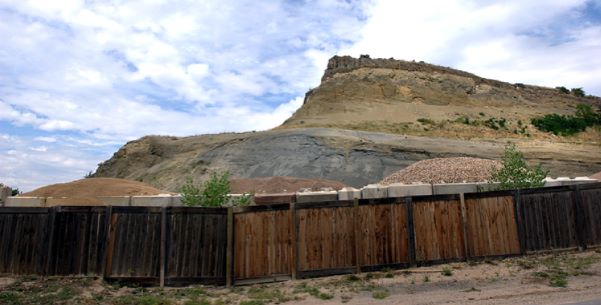 “Sacred sites are hard to generalize. It’s the land that speaks to the people and the power of the place that speaks to the people” (Steve Moore, Berry, “Preservation Concerns at Colorado Sacred Site”). Today, however, all that is seen is the butte. This exemplifies the misunderstanding that has occurred across culture and time: the butte itself is not the only spiritual significant piece of land, but the entire area collectively is what has spoken to the people who visited it for ceremony.

Currently, there is a soil remediation project that is being carried out in the surrounding area of the Valmont Butte. There is concern in the surrounding population and among the Valmont Butte Heritage Alliance and Native American Rights Fund, that the soil clean up may have the possibility of polluting groundwater and further negative impact on the environment (Morgan). Measures are being taken to protect the burial sites of both the American Indian remains and the remains of early settlers (Meltzer). Any excavation that occurs during the butte clean up is closely monitored by archaeologists and a monitor from the Arapaho Nation to ensure respectful treatment of remains and artifacts (Berry, “Sacred Sites Preserved but Ceremonies Affected”).