Week 3: Recollections of a Band Nerd or is it Band Geek?

As sixth block draws close, so does my time as a blogger for this course. The past few weeks and especially this previous week has been a comforting notion to my past as a band nerd/geek. The correct terminology has long been debated, with band geek having been notoriously prominent. Nonetheless, this week our class learned about the Romantic era, an intellectual and artistic movement that began in the late 18th century. As its name suggests, the Romantic era emphasized the emotions of the heart thus highlighting the individual, heroism, and imagination. These themes characterized numerous works of literature, painting, and music during this time. Artists and composers of this era include Richard Wagner, Franz Schubert, and Giuseppe Verdi just to name a few. Their compositions are often perceived as criticism and rejection of the ideas of order and to some extent, ideals of the Enlightenment.

This week we also watched Rigoletto by Verdi. Within its three acts, we watched and listened to several beautiful arias and recitatives. By the end of the opera, I was both moved and astonished by Gilda’s compassionate sacrifice for her father Rigoletto and lover the Duke. In contrast to Don Giovanni, Rigoletto was comparably more tragic, perhaps because of the reverence for the expression of emotions and the goodness of humanity. These ideals are representative of the Romantic era.

In addition, much of the music from the romantic period reminded me of my time in concert band as a flutist. It is a warm and welcoming embrace because I started performing in 5th grade and throughout high school. Hence, the compositions that we listen to in class evoke memories of the rigor and passion of being part of a band. The nostalgia presses me to visit my band directors, to read music and play the flute again. It is then when I recall that I am listening to Romantic music which is branded by human sentiments. It is no wonder why the music of this era is called Romantic and I am grateful for this class. With this, I must say my farewell as this will be my last blog post. I enjoyed writing for this course. Thanks for reading.

This week we watched Don Giovanni, an opera buffa collaboration arranged by the well-known Wolfgang Amadeus Mozart and the Venetian poet Lorenzo Da Ponte. Although Don Giovanni is categorized as an opera buffa because of its copious amounts of comedy, it is also accompanied by several somber and serious themes. The elements of humor integrated throughout the opera include the jests made by Don Giovanni’s servant, but the serious aspects pertain to the larger scheme of the characters. For example, the persona of Don Giovanni is portrayed as the ultimate womanizer who seeks to impart his love to all women as it would be a crime for those who do not receive it. He can be easily viewed as the charming villain. Another perspective, however, could consider him a man ahead of his time. Unlike the other characters present in the opera, the Don is not veered by religious dogma or the confines of society. In fact, he challenges others to abandon their life dictated by religion and convention.

The serious elements of the opera are also noted in Mozart’s novel use of different melodies to depict the various emotional states of the characters. In this way, he captured the character’s essence and state of emotion.

For instance, the duet between Don Giovanni and Zerlina reveals the masterful techniques developed by Mozart. In this scene, the Don attempts to woo Zerlina although she is to be wedded to Masetto. The music accompanying her part of the duet reveals Zerlina’s state of mind while the text suggests otherwise. Zerlina’s melody follows a melodic contour inflected with chromatic accents and non-harmonic tones that disrupt the emotional direction of her melody. In other words, the music exposes her indecision and covet for Don Giovanni. She is, therefore, not the innocent peasant girl but rather, a cunning woman who is willing to violate social rules for the Don. Accordingly, this is a theme that may be viewed as serious because it represents the surreptitious desires to stray away from the traditional conventions during Mozart’s time.

In summary, I believe that Mozart blurred the distinction between an opera buffa and seria. It was his inclusion of comedy, drama, and tragedy made Don Giovanni a success that continues to secure audiences even today.

Have you ever had a class fewer than five students? Well, our Music in Western Culture course (MU150) this block consists of only two students including myself! At the beginning of the first week, I was a little intimidated by the class size. A class this small means that class discussions are fueled by only three of us. Now, this isn’t a terrible thing at all but a dollop of shyness can make daily class conservations petrifying. What if I say something wrong? What if I offend them? What do I do if they look me in the eye? Hence, on the first day, I was hesitant to even offer a modern pop song for the beginning of class. How hard was that? Difficult.

“Make mistakes!” as our professor, Dr. Rakefet Bar-Sadeh, would exclaim for the first few days. She urges that we can only grow and discover ourselves -our limits and potentials- if we are brave enough to make mistakes. It is a fierce reminder that few things should get in the way of our education and self-discovery. The rest of the week demanded even more dialogue and by Friday, I was speaking out at least twice a day as I grew comfortable with my classmate and teacher. My gradual confidence to speak every day may seem small, but it’s a huge step for me and a rewarding one. I encourage every student to speak up at least once in the classroom and build your confidence from there.

In addition, Dr. Rakefet Bar-Sadeh strives in creating an interdisciplinary education. With a B.A. in Mathematics and Physics and her Ph.D. in Musicology, she believes that learning should draw knowledge from all academic disciplines to consider new ideas and reason across boundaries. For instance, she insisted that I write my final paper relating to Western music and the biological sciences since I intend to be a molecular biology major. Thus, the notion of my paper discusses the anatomy of the birds’ respiratory-vocal system and the use of bird vocalization in Western music! Dr. Rakefet Bar-Sadeh uses the advantages of a small class setting to create a more personalized and interdisciplinary education for her students.

Dr. Rakefet Bar-Sadeh is a visiting professor from Israel who is teaching two blocks for Spring 2019. She has contributed to academic works regarding Israeli composers born before the declaration of the state of Israel and educated in Europe and their impact on new movements of contemporary music in Israel. Dr. Rakefet Bar-Sadeh is a professor at the Hebrew University of Jerusalem and also works as a consultant for the Canada Royal Conservatory. She is married and a proud mother of two children. Her next block is Jewish Music (MU224) so be sure to take the class with her!

Overall, I am excited for what the next few weeks have to offer. Here’s a selfie of our class! 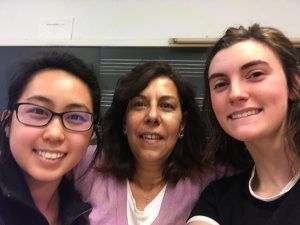