Home to CC’s highly successful intramural and club sports programs, the Adam F. Press Fitness Center sits on the north side of El Pomar Sports Center. Until 2011, the space was simply a grassy hill and long cement ramp down to Washburn Field. A multi-million-dollar renovation to the sports complex changed all that. By May 2013, the area was transformed into an impressive multi-use facility.

“We really did listen to the voice of the student body,” says Chris Starr, CC’s director of intramurals, club sports, and wellness, about the planning of the center. “We were very intentional in the use of the space and wanted to try to make it a place people want to be.”

In addition to standards like cardio fitness, weights, and basketball areas, the center also offers a newly renovated indoor climbing gym with options for top-roping, lead climbing, slack-lining and bouldering; table sports (table tennis, foosball, and billiards); a lounge, and a multipurpose room. The latter is connected to a massive deck overlooking Washburn Field.

Starr says that people use the multipurpose room and deck for everything from yoga to just hanging out. “Students wanted an informal gathering space for group projects, studying, and celebrating. We heard what they wanted, and I think we’ve provided that.”

With an average of 750 unique, unduplicated campus IDs being used to gain access to the fitness center at the beginning of most blocks, its popularity is impressive. “That number falls off a little toward the end of the blocks, naturally,” says Starr, “but attendance is pretty steady.”

Mitch Gardzalla assumed the role of assistant director of the fitness center in 2016 after serving as an athletic trainer for club sports. In his second year in that position, Gardzalla takes time to interact with each student who comes in. “My job here is to enhance the student experience.”

The center offers both group and personal training opportunities, all for free. “I like being an educator,” Gardzalla says. “The meeting [with a student] that I just had, for instance, if I can get her functioning on her own, and get her to a position where she knows what’s going to be good for her body, what’ll be bad for her body, and how to develop those skills for the rest of her life — that’s really what I like to do.”

Group fitness training is completely student-driven. If the students want an activity, it is largely up to them to coordinate. “There are a couple of contracted coaches,” explains Gardzalla, “and Chris leads students through the process of getting those, but there are many students who come to the school with certifications such as yoga instructors, or various boot camp-style programs, and those classes are entirely student-led.”

Students desiring to lead group fitness classes must meet with Starr beforehand to verify credentials and quality. Essentially, if students want a sport or activity, the center is there to help guide them through the requirements to set them up.

Student agency is part of what makes the facility so popular. The center is distinct from the varsity athletics facilities. Though all students, faculty, and staff are always welcome in the space for personal fitness, team use is kept to intramural and club sports.

“Intramural sports are played in and among CC students,” says Starr, “while club sports are more competitive, and play other academic institutions. Some of our programs are really competitive, like our ultimate frisbee teams, and women’s rugby. They compete on the national level.”

Hayley Bates ’18, a member of the CC club cycling team, recently earned a spot on the podium at a national mountain biking competition. Even though she’d suffered injuries during another competition that took place at the Air Force Academy, which left her unconscious on the side of the trail, she recuperated quickly, and went on to place in nationals.

“The difference between club sports and varsity is that the clubs are not part of the National Collegiate Athletic Association,” Starr says.

Clubs can get team sponsors and they aren’t regulated by the same set of rules that oversees varsity sports. For Bates, that means the ability to turn pro while still a student. Without NCAA restrictions, she has recently participated in professional races that would not have been possible had she been in a regular varsity setting.

Bates says she used the spin bikes upstairs at the fitness center for aerobic conditioning on wintery days, then went downstairs to the weight room for strength training. “Mitch helped with the weights, and I used the balance balls and rollers, too.” 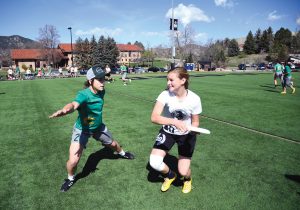 Clubs are free to choose the level at which they will compete. “The women’s ultimate frisbee team competes at a Division I level, because they want the challenge and they have the skill to do that,” says Starr, “while other teams choose to compete at Division II or III level, depending on where they are comfortable.”

To put the divisions into perspective, she compares Colorado College with the University of Colorado, Boulder. “We have about 2,000 students to choose from,” she says, “of those, we have about 350 who play at the club level, and they’re consistently choosing to go up against schools like CU that have a pool of upwards of 30,000 students, and they’re doing well. They do this year after year — the skill and drive of our students are impeccable!”

Bates attributes some of her success to Starr. “Chris and I are in touch on a constant basis,” she says.

Like the rest of the program at the Adam F. Press Fitness Center, club and intramural sports at the facility are student-led, and student-organized, which gives team members real-life experience in coaching, leader-ship, and administration. Starr says teams take care of everything, from coordinating practice times, to arranging transportation, and scheduling competitions. She and her staff are there to help guide the process.

It’s not all about clubs and intramurals, though. The facility is there to serve the entire campus. Gardzalla sums up the core philosophy of the center easily, with just a few words: “The center is for everybody, all are welcome.” 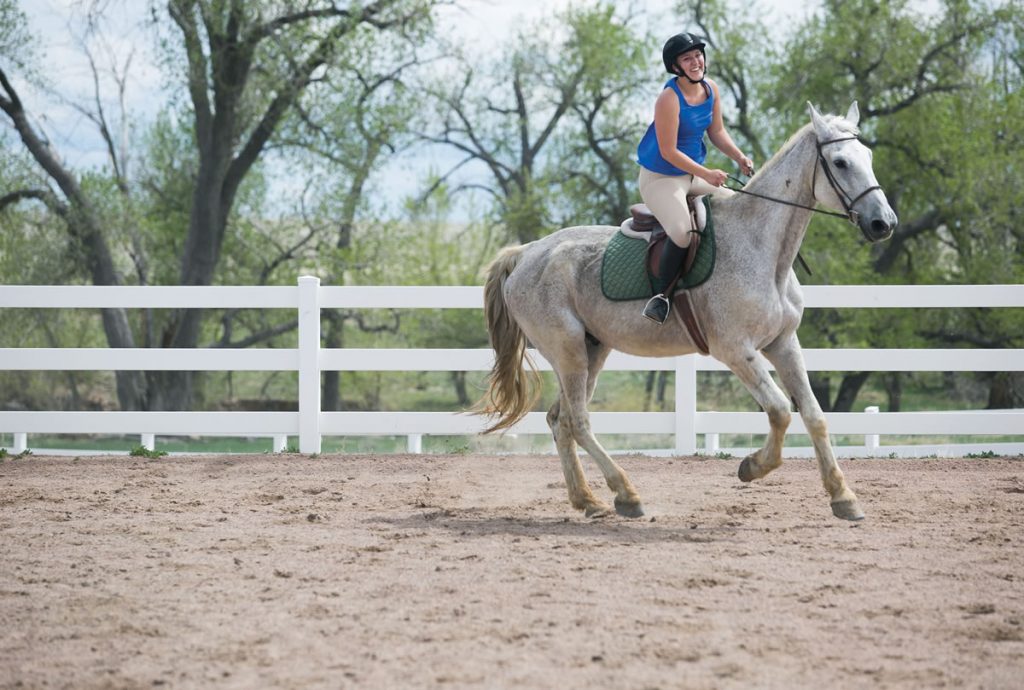 Sereniti Mora ’17 rides her horse Cassie at MM Equestrian Center in Fountain, where members of the CC equestrian team practice four afternoons a week. Mora said the experience was one she could never have had without the support of CC’s intramural team. Photo by Jennifer Coombes