Game On With CC’s eSports Team 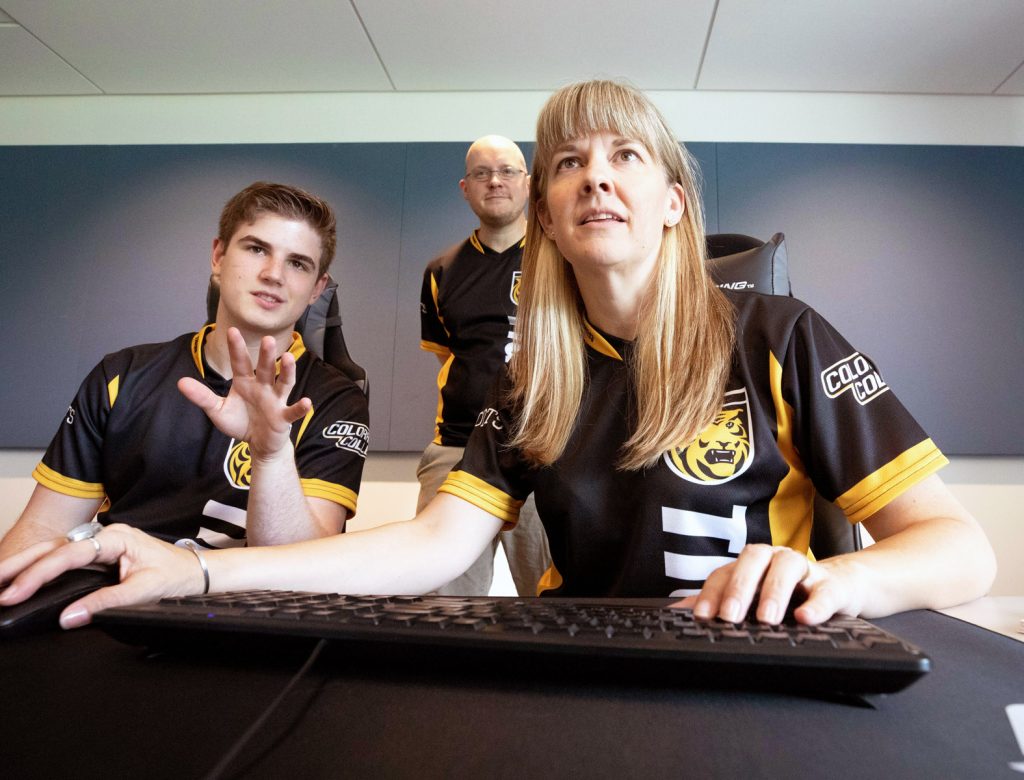 Kirsten Akens ’96 gets a lesson on how to play League of Legends from eSports team member Josh Lauer ’19, and Coach Chad Schonewill ’03.

As a first-year living in Loomis Hall in the spring of 1993, I could often be found late on weekend nights in the first-floor computer lab, competing against other students in a text-based, online role-playing adventure.

Play was dial-up slow and laborious. I’d type “say hello” if I came upon another character and wanted to interact; “who” if I wanted to know who all was in the virtual room with me; and “help” if I needed next-step hints. But as someone with closeted-geek-tendencies, every move I made felt next level.

Twenty-five years later, I’m sitting in Colorado College’s 21st-century library next to Josh Lauer ’19, one of the college’s eSports team members. The film and media studies major is going to train me in the basics of his team specialty, “League of Legends,” one of two online games the team plays competitively, and whose roots arise from the text-based fantasy-themed games of my college days.

As we wait for set-up to load, I ask Lauer how long he’s been gaming and he says pretty much his whole life. I laugh, but he’s not kidding. “That’s one of my favorite things my mom brags about,” he says, “her witnessing me at 18 months old, crawl over to our Mac and turn it on and proceed to play a game.”

It was the matching game “Concentration,” meant for little ones, but just 3 1/2 years later, at the ripe old age of 5, Lauer would leap into the competitive gaming world, thanks to a friend’s older siblings’ basement filled with computers and a game called “Starcraft.”

Today, Lauer ranks in the top five percent of “LoL” players worldwide, and I think I’m in really good hands.

From Club to … Much More

eSports at Colorado College began three years ago with “an enterprising student who is a very competitive video gamer,” says ITS Solutions Center Team Lead and eSports staff administrator Chad Schonewill ’03. Lilly Chen ’19 approached the student government to create an eSports club, which it approved. The group began to gain competitors, a bit of attention, and participation in a few collegiate tournaments. The following year, Chen focused her attention elsewhere, and that group became the casual gaming club called C+5.

In the fall of 2017, Schonewill says, eSports started to be “on the meteoric rise in the news, especially collegiate eSports.” President Jill Tiefenthaler, Director of Athletics Ken Ralph, and Vice President for Information Technology and Chief Technology Officer Brian Young took interest and supported formalizing a pilot program beyond club status.

The inaugural eSports team began competing this past spring in two games, “Overwatch” and “League of Legends.” Of the 100-plus students who indicated interest in participating, there are currently 18 players divided equally into two “Overwatch” teams and one “LoL” team. A five-student staff helps to coordinate logistics, communications, and scheduling, as well as produce, broadcast, and comment on matches, which can be viewed on Twitch, the world’s leading live-stream platform for the gaming community.

During their first semester, eSports players practiced a couple hours a day for three to four days a week, met up at least once a week to discuss strategy, scrimmaged with other schools once or twice weekly, and held social activities for team bonding. The team’s goal, Schonewill says, is “to make this as much like a traditional sport as possible … so it’s a fairly rigorous schedule.”

“We ran fast and made a lot of progress,” adds Schonewill, “and actually our biggest struggle right now is that we’re quite far ahead of most other schools our size.”

But that doesn’t mean they’re going to slow down. Next semester, the team’s gear, practice, and play will move into a dedicated space in the basement of Palmer Hall. Schonewill and other staff plan to create an informal athletic conference with seven other similarly sized colleges as a way to support a competitive structure while waiting for the Southern Collegiate Athletic Conference to make a call on how it will incorporate eSports. They also hope to host finals in the spring at CC with the two teams playing the championship game on stage in front of a live audience.

It’s been just five years since the U.S. State Department recognized eSports players as professional athletes, and, according to ESPN, more than 60 varsity collegiate eSports programs have started up since then. The NCAA’s board of governors began discussing its “potential role” in eSports last fall. Whether or not you can envision eSports as a part of collegiate athletics, there’s no doubting its rapid growth both in popularity and money on a global level.

eSports has surpassed ESPN’s viewership at 8.5 million viewers daily on Twitch, to the cable television network’s 7.1 million. Championship purses often exceed those of traditional sports, and according to Barrons, the value of the global eSports economy will top $900 million in 2018, up more than 38 percent from 2017. In July, the International Olympic Committee announced plans to host an eSports Forum, to begin discussion with eSports reps about potential collaboration.

With my left hand on the keyboard, right hand on the mouse, wearing a jersey gifted by Schonewill, Lauer coaches me through an “LoL” tutorial. I establish my champion’s movement, slay my first enemy minions, and acquire my first gold, which I can use to purchase items such as elixir of iron, iceborn gauntlets, or blasting wands. “Can I buy more clothes?” I ask Lauer, half-kidding, half-not, considering the lack of apparel my female champion currently sports. (Apparently, with enough gold, yes, I can.)

After I successfully completed the tutorial, Lauer deems me ready for an intro match with other players. I randomly select blue-haired Sona for my champion — turns out she’s the “Maven of the Strings,” who primarily heals and supports her teammates. I’m pleased with the choice, and I see how everyone can find a role that fits their style, personality, and desires in this high fantasy magical world of enemy-crushing.

There’s little time to be pleased though, as game play begins and Lauer sends me to offer support to Gangplank the Pirate. For the next 17 1/2 minutes, I hit the keys Lauer tells me to hit, purchase the items he says I should buy, and regularly forget to use my mouse. I’m fascinated, and overwhelmed, and can’t help but feel a tiny sense of accomplishment when Lauer tells me I’m “a brilliant support.”

He’s kind in his words, but I know from watching him play after I’m done, that coordinating movements, strategizing on the fly, and working within a massive amount of game rules to score a win is no easy task.

It may even be an Olympic-level feat.

Learn more about eSports at Colorado College, and visit the team’s Twitch channel to tune into matches and follow their play.