Welcome in the Wilderness

When he considers Britt McClintock, he sees part of the solution: an outdoor education and gender-identity specialist whose presence as a biracial lesbian visibly communicates that all people are welcome
in the wilderness. 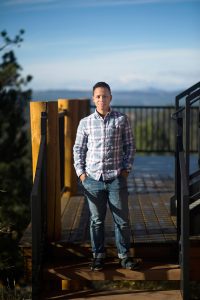 Britt McClintock poses for a portrait on Sunday, October 7, 2018 at the Gilmore Stabler Cabin of Colorado College.

It’s a lesson McClintock, 33, learned as a girl roaming the woods near Erie, Pennsylvania.

“I grew up in a predominately white environment … and spent a lot of my younger years struggling with my self-identity, so the outdoors offered a space where there weren’t a lot of rules, a lot of boundaries,” she says.

McClintock joined the Outdoor Ed staff in August as executive-in-residence, a position she will hold through December. She’s tasked with helping the program embody its commitment to inclusion and diversity: developing curriculum used to train student trip leaders, offering workshops, bringing in guests, and leading outings herself. 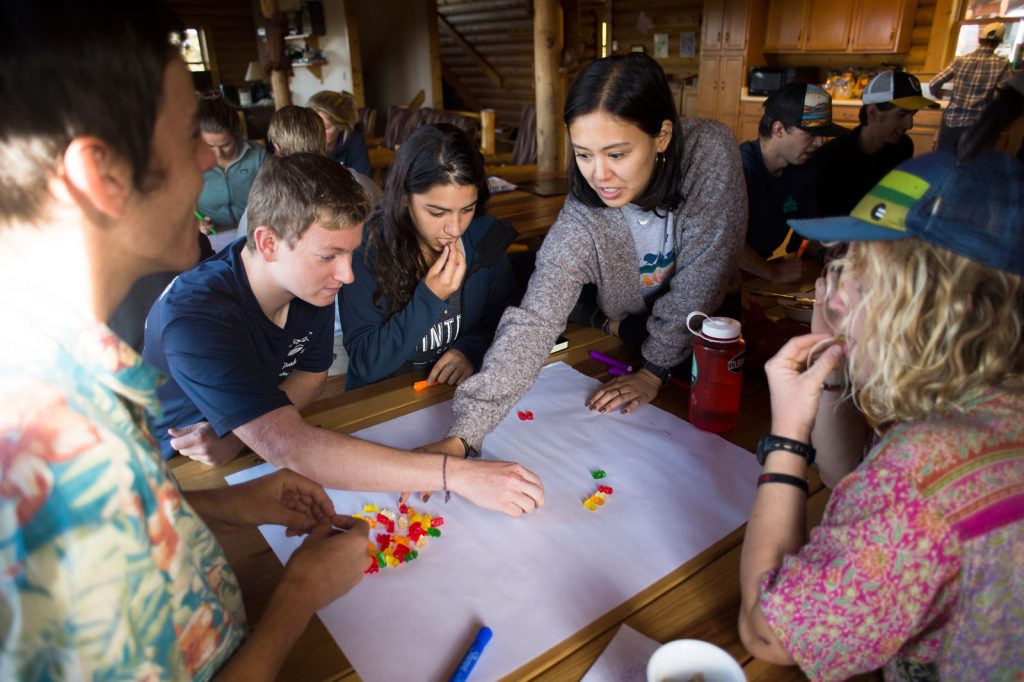 That included a first-year outdoor orientation trip composed of eight women of color. “I think we passed at least 50 people” backpacking in Eagle’s Nest Wilderness, McClintock recalls, “and one of the students said, ‘They’re all white. What do you think they think of us out here?’”

It’s a familiar experience for minorities who venture into the wild. Nearly three-quarters of Americans who participate in outdoor activities are white, according to The Outdoor Foundation’s 2018 outdoor participation report. Historically, African Americans are least likely to be involved in outdoor recreation, though Hispanics also lag whites.

That’s a concern, for several reasons. At a time of accelerating environmental degradation, a new generation of invested wilderness stewards is crucial — and minorities are expected to become the majority in the United States by 2050. “If you don’t have people of color who care for the environment and who are advocating for it, what does environmental conservation start to look like?” McClintock asks.

But participating in the outdoors — especially on group outings that require cooperative effort — also benefits individuals.

“A fully complete education is not only about academic performance and intellectual development,” says Peter Steinhauser, executive director of Outward Bound USA. “It’s about character development, teamwork, compassion for others. Those are not necessarily the kinds of things one learns at the best of schools.” 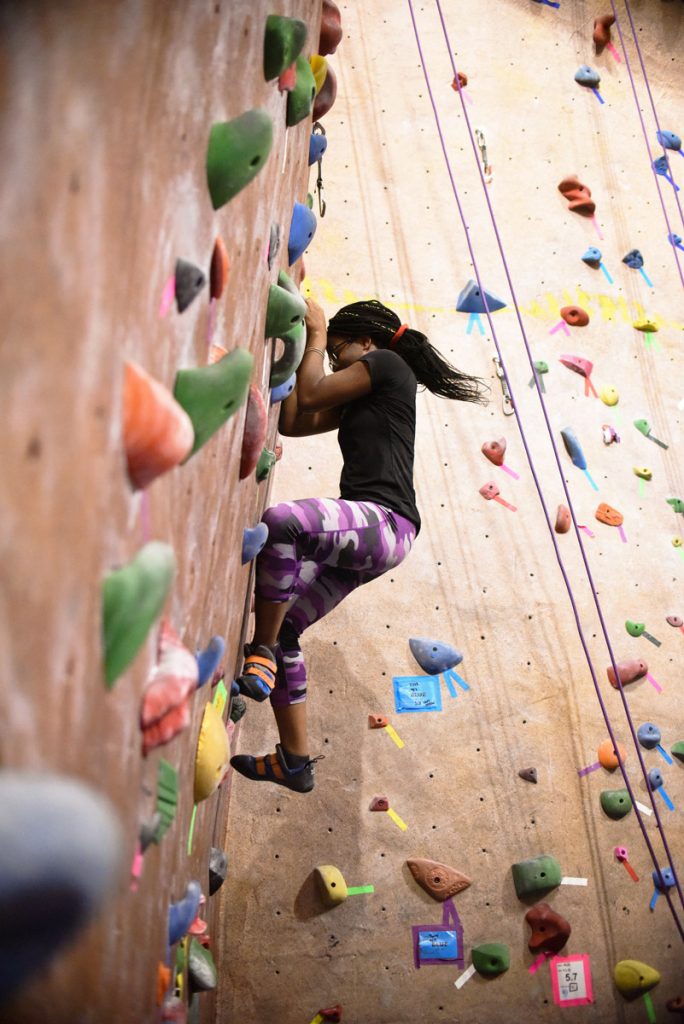 Abby Dione, the first black female owner of a climbing gym in the US, led an all female climbing session in the Ritt Kellogg Climbing Gym. Oct. 3, 2018

Experiential outdoor learning embodies qualities Colorado College values, Hammes says. “It’s powerful when people can step outside their comfort zone and do what they didn’t know they could. The activity — white-water rafting, mountaineering, or whatever it is — is just a conduit to fulfilling greater learning objectives: leadership, stewardship, discovering what is within themselves, and out there …

Outward Bound learned long ago that the greatest benefits attach to mixed groups: “The more homogenous, the less powerful the outcome,” Steinhauser says. That composition — a small, diverse group in which members must rely on each other to accomplish shared tasks — is also the most effective for countering unconscious bias, according to Princeton social psychologist Susan T. Fiske.

The relationship-building that occurs on outdoor trips can be “magic,” Hammes says. “You’re out there overnight and dealing with a little bit of adversity, and everything is very communal: You’re eating, sleeping, hiking together — and having conversations you probably wouldn’t have on campus.”

Women are well-represented in outdoor education; at both Outward Bound and CC, they comprise the majority of field instructors. But keeping minorities involved is a challenge. Beyond the Priddy Experience — a required four-day new-student orientation trip that combines service with outdoor activity — many will take one additional trip and then fall away, Hammes says. 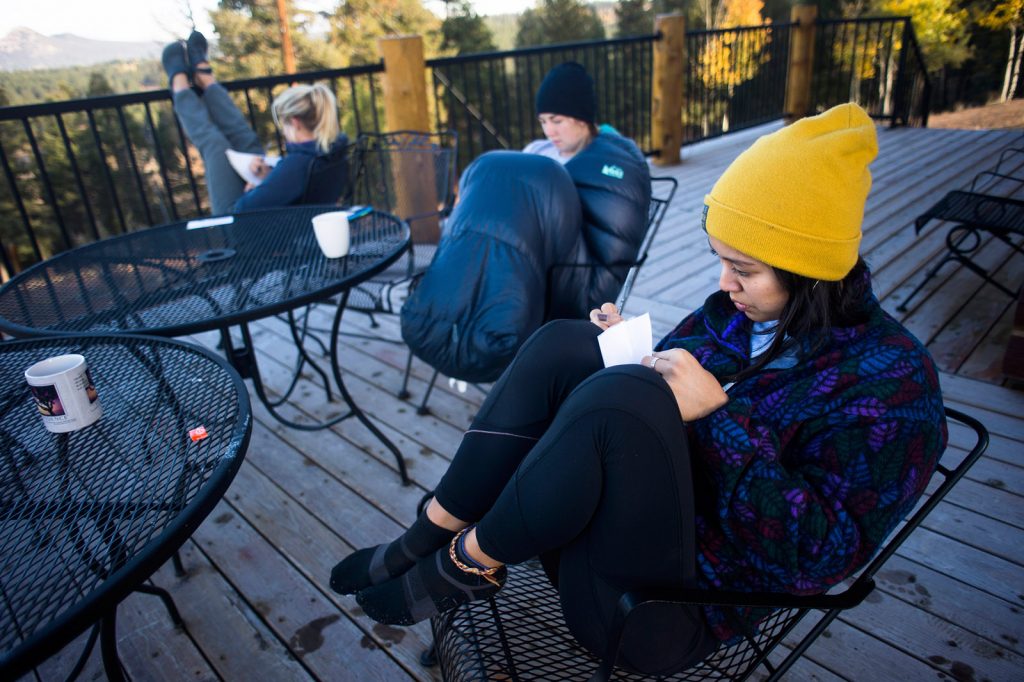 Kiana Tsao, junior at Colorado College, reflects on a provided quote about nature during outdoor leadership training on Sunday, October 7, 2018 at the Gilmore Stabler Cabin of Colorado College.

Money is one problem. At Colorado College, the class gap can be considerable. Although Outdoor Ed trips and equipment are free or inexpensive, students from less affluent families may experience what McClintock calls “gear fear.”

“There’s these really fancy brands that can make you feel you’re not able to go out if you’re not wearing certain things, or have a certain backpack … like you can’t do it if you only have jeans,” she says. Lower-income students may also be holding down jobs that limit their free time.

“A lot of students of color are coming from completely different backgrounds than white students,” says Rachel Delley ’20, whose mother is white and father is black. “They feel so out of place. They don’t go skiing on the weekends because they don’t have the money, and they might never have tried backpacking or camping.”

McClintock notes an additional disconnect for students whose families may have struggled to provide them with modern comforts. “If they have parents who grew up really poor, it’s a weird thought: ‘You want me to go outside, sleep on the ground and not shower, after my family fought very hard for me to have all these amenities in life?’ It feels very uncomfortable,” she says.

Racial history can also temper attitudes toward the outdoors. Black American narratives about nature are informed by the manner in which “the natural world has been used to destroy, damage, or subjugate African Americans” through slavery, lynching, and other violence, writes African-American poet and scholar Camille T. Dungy.

Additionally, many minority students grow up in cities, where they have little opportunity to experience the outdoors. To them, the idea of recreating in the wild can feel alien.

“There’s just this cultural norm: ‘My people don’t go in the outdoors; that’s a white people thing,’” Hammes says. “That has been the bigger crux for us — helping minorities feel like these places and experiences are for them.”

Better representation of historically marginalized groups — not just as participants but as leaders — is crucial to the program’s efforts. “You have to have these conversations about diversity and inclusion, but you also need to make sure you have teachers who are representational,” McClintock says.

That’s why she brought Abby Dione to CC. The first black woman owner of an indoor climbing gym in the United States, Dione visited campus in October, and spent several days working with student climbers, including several African Americans.

“Good information is good information,” Dione  says. “But if it comes through the body of someone you can relate to — if you feel this person is familiar to you — it allows you to receive that information even better.”

Delley became a leader last summer after going on several trips, including one led by a friend who also is a student of color. “I’d started to see changes on campus as to who is thought of as an ‘outdoorsy’ person, and I really wanted to help the effort Outdoor Ed is making,” she says. “I’ve seen multiple trips just this year led by students of color, and all of these freshmen of color want to join.”

That’s McClintock’s dream: to create for all students that feeling of belonging the natural world first gave her so many years ago. “It’s a timeless thing,” she says. “Nature will forever have the ability to make people feel that way. It’s an unforgiving but beautiful place where everyone fits.” 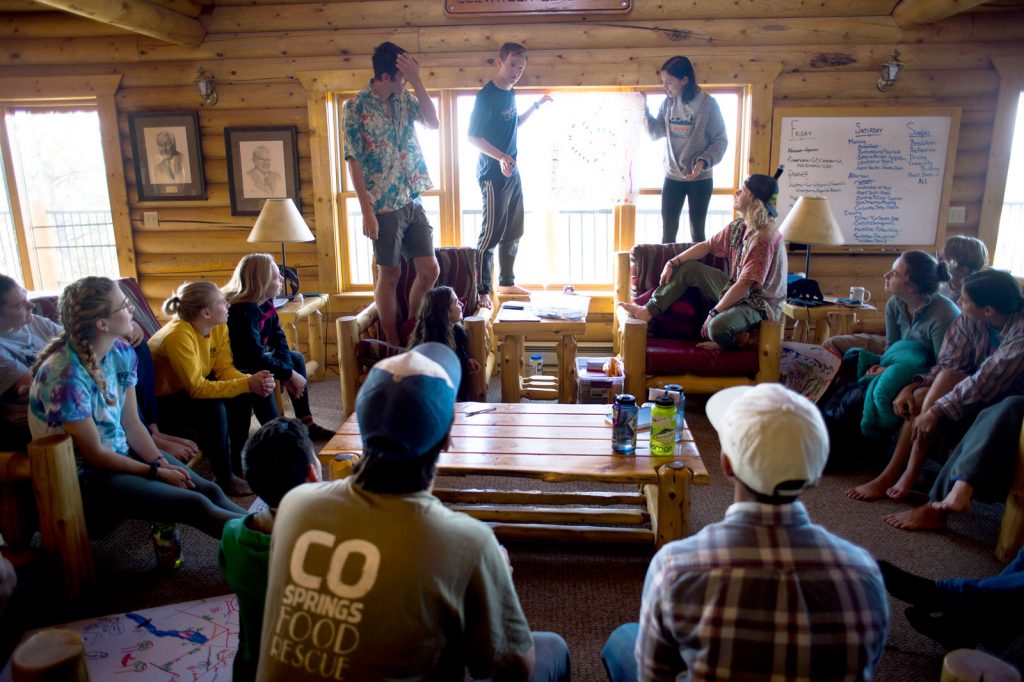