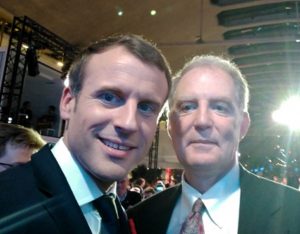 Lou Derry ’81 (on right), with Emmanuel Macron, president of France

When Louis Derry ’81 graduated from CC he did not intend to study climate change, nor spend time with international politicians. Yet opportunities along the path of a career in earth science led Lou to Paris, where, in 2017 he accepted an award from French President Emmanuel Macron. Lou is one of 13 U.S. scientists selected to “Make Our Planet Great Again,” a research initiative of the French government to counter the U.S. withdrawal from the UN-sponsored Paris climate agreement.

“For me, the chance to work on some very exciting science questions with my French colleagues is very attractive,” Lou says. “I will be collaborating with scientists at the Institut de Physique du Globe de Paris, where we will be looking at surface water quality and how it is affected by climate change.”

Lou is just one member of the Derry family who works to mitigate the impact of climate change. Claire Derry ’19 (also pictured on page 8) and her mom Alexandra Moore have spent the better part of a decade on carbon sequestration through afforestation, and most recently launched a national climate education effort with a nonprofit group in their hometown of Ithaca, New York. Alex works as an educator at the Paleontological Research Institution (PRI) and is a contributing author for PRI’s “Teacher-Friendly Guide™ to Climate Change.”

“We were just about to send this book to the printer in the spring of 2017 when we read that climate change deniers at the Heartland Institute were mailing out 200,000 copies of a climate denial booklet to teachers nationwide,” she says. “We knew we had to respond.” The Teach Climate Science Project was born. But how does a small nonprofit reach a national audience? “With the help of college students who need a summer job,” says Alex, “and we’ve got one of those in our house.”

Claire joined the effort as a summer intern, setting up the crowdfunding platform, offering a social media presence, and writing press pieces and small grant proposals. Claire’s writing grabbed the attention of major donors and organizations like the Sierra Club, and was key to the successful launch of the project. To date, 50,000 teachers have received peer-reviewed climate science resources, and the fundraising and mailing effort continues.

“Issues of social justice are really important to me,” says Claire, “and the negative impacts of climate change always fall hardest on the most vulnerable. In my family we’ve been working on climate for as long as I can remember. I’m still leaning on my parents to get an electric car, though.”

“This is an all-hands-on-deck moment for global climate,” says Lou. “As a family we are fortunate to have opportunities both at home and abroad, working at large scales, as well as at the level of individual schools and classrooms. We hope to encourage everyone — kids, adults, scientists, policymakers — to seek solutions. This is too important for anyone to remain standing on the sidelines.”