The CC women’s soccer team isn’t unfamiliar with advice — from their coaches and teammates, professors and peers alike. But in October, they received inspiration from two unlikely sources.

Pro athletes Brandi Chastain and Shamila Kohestani visited campus to discuss the role of women in professional sports, specifically in Afghanistan and other developing countries, as well as their own experiences in the professional sports world.

As Chastain and Kohestani addressed a post-practice, tired-yet-engaged women’s soccer team, almost every player had questions — many about the hardships and setbacks of being a woman in professional sports, both in the U.S. and Afghanistan. The two spoke of the importance of teamwork, how leadership never belongs to just one individual, and how no one can succeed unless everyone does.

Chastain emphasized the importance of selflessness in teamwork. “It’s not what you’re doing for yourself, but how you’re pulling up others with you,” she said.

She also spoke to the importance these student athletes had in representing not only Division I athletics for Colorado College, but also as the only women’s DI team at CC. She thanked the players for being such an important and respectful example for the young girls who look up to them — saying that every time they step on the field and interact with each other in a supportive manner, young girls see women of all heights, shapes, and sizes lifting each other up with every goal, every penalty, and every mistake.

Kohestani spoke to the athletes about the privilege they have being so wholly supported by both the school and their families — a luxury women and girls in other countries don’t always have. She emphasized how important it is to give whatever you do, on and off the field, 100%; “to believe in yourself and be whatever you want to be. Other women don’t have the same rights, so we have to be the ones to set the global standard.” 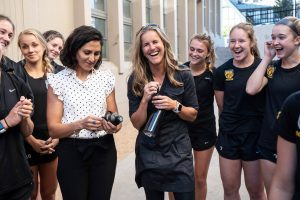 When the athletes lined up for a photo and final words, some of the players got emotional. Two seniors, Lucia Castanza ’20 and Madeline Stesney ’20, presented Chastain and Kohestani with Colorado College water bottles, a piece of the team’s unifying rope tied around each (see photo, right). The rope signifies the unification of players, both past and present, and the importance the community of women athletes has on each other.

Chastain left the players with one last piece of advice. “I want to remind all of you of the fortune you have. There are a lot of opportunities for what you can do in the world of soccer and the general world around you. There’s a joy that needs to come with you doing what you want to. Get your head up, see what’s around you, don’t be afraid of pressure — invite it. Dig deeper.”