Creating Your Own Luck 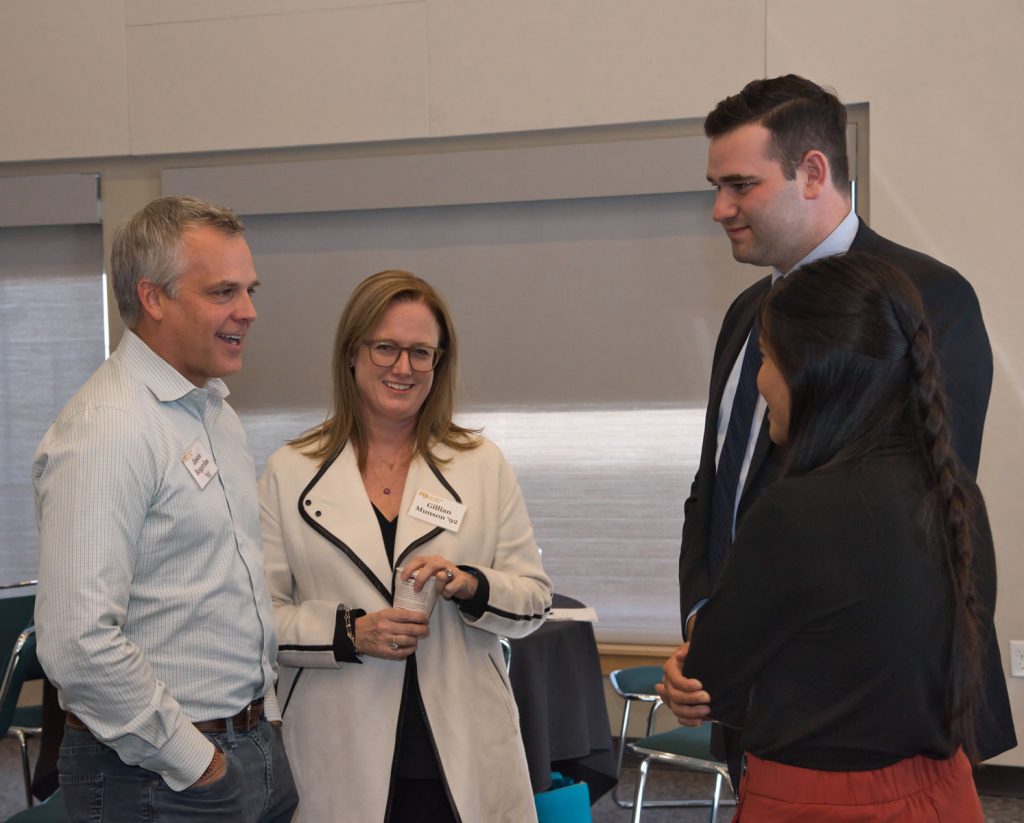 Jason Bogardus ’93 (left) and Gillian Munson ’92 (center, left) speak with Zachary Glosser ’20 and Vi Nguyen ’20 at an intermission during the Finance Symposium. The potential of CC’s network to connect students and alumni with great careers was a recurring theme during the symposium. Photo by Josh Birndorf ’20

Colorado College’s Career Center hosted a daylong Finance Symposium last semester, where CC alumni and students gathered for panel discussions covering topics ranging from an overview of the finance industry to networking and interviewing to finance and sustainability.

Onyx Bengston ’18 traveled to CC from Pittsburg, Pennsylvania, where she works in corporate and institutional banking and asset management at PNC Bank. For Bengston, who holds a bachelor’s in economics, networking with members of the CC community has been critical to her ability to forge her career path.

“Just having those people available to develop relationships with is invaluable,” she says. “I don’t know if that’s obvious to students now, but the further you get in your career, just knowing that you can call people who have been there becomes really important.”

The idea for the symposium came from several alumni, including Jason Bogardus ’93, a managing director for wealth management and a private wealth advisor for the 545 Group at Morgan Stanley Private Wealth Management in San Francisco.

“The first objective of the symposium was to help students figure out whether a career in finance is right for them,” he says. “The next objective was how to best leverage the alumni network because graduating from CC and looking for a career in finance, you’re competing against students graduating from Wharton, MIT, Chicago, and Columbia — schools that have traditionally fed into Wall Street. So, you need to figure out a way to have your CC education become a strength, not a weakness.

“The third objective — or reason why this symposium came about — was to ingrain the importance of this narrative that you have to create your own luck. Luck is not going to come find you,” Bogardus says.

He recalls how he landed his first job because he played in a reggae band, leading to a chance encounter with a citizen of the Ivory Coast who became impressed with Bogardus’ knowledge about Félix Houphouët-Boigny, the country’s president from 1960-93. Bogardus explained that he learned about the president while at Colorado College and his new acquaintance offered him a job on the spot.

“That was total luck, right? But I created it and that’s such a CC type of story,” he says. “You don’t hear those kinds of stories other places, typically. And I think this symposium is going to be full of those stories,” he said prior to the event.

Todd Kealthley ’93 spoke about applying the analytical abilities he gained from his Colorado College comparative literature degree to finding success in the finance industry. He also discussed how he decided to move to New York and pursue a career in finance — making a career change after a stint in political fundraising.

Now, he has a successful career at Virtu Financial in New York City.

Keynote speaker Gillian Munson ’92, currently a partner at Union Square Ventures and formerly the CFO of XO Group, recalled her first job in finance as a classic CC story.

After working as a camp counselor — a role that required “24-7” attention all summer — she sold her future boss on her ability to work hard and began a career path she describes as “zig-zagging,” but one always grounded in passion and curiosity. She also reiterated Bogardus’ point about breaking into an industry dominated by graduates from other universities.

“Once you’re in the door, you go shine,” she says. “If you’re working harder and doing better than any other person from any other school, you’re going to be successful.”

Munson did stress the challenges of working in a male-dominated industry and recalled being described as “difficult” and receiving unequal compensation for years earlier in her career. And she recalled the strength she still continues to draw from her CC relationships.

“If I’ve had a rough day at work, I go back to CC people,” she says. “They seem to understand better than anyone.”

Although she graduated less than two years ago, Bengston noted the abundance of networking opportunities available to students and alumni through the CC community and the Career Center.

“There is so much to pay forward,” she says. “So many people provided connections and time and opportunities to me. There’s an incredible amount that I think I have to give to the next generation.”

For more information about how to connect with CC alumni around professional networking, contact the Career Center at careercenter@coloradocollege.edu.