Descending into the West Elk Coal Mine is like entering a new world: Lightless, filled with the buzz of machinery and occasional rumble of large vehicles. Underground, almost everything seems like a grayscale image. Heaps of crushed limestone dust coat the floor, flying up each time a heavy boot comes down. There have been days that engineer Ben Godwin went underground before the sun came up and left after it had set, not seeing a minute of sunlight all day.

But what seems a dark and dull place to a newcomer is the comfortable and familiar stomping grounds of more than 300 employees of the West Elk Mine in Somerset, Colorado. It is the last mine standing in the area, with limited years of operation left. In a community with a coal-dominated economy, there is pressure for miners to find jobs in new fields.

“As we saw coal mines shutting down in this valley, we saw the opportunity to inject renewables into the community,” said Pete Mueller, director of campus and hands-on training at Solar Energy International.

SEI trains people to work in the solar energy industry, but leaving the coal industry isn’t as easy as it might seem.

Coal miners have a lot of pride in the work they do, and see their fellow miners as part of their family, explained Godwin. But a shift to energy efficient products, as well as growing popularity of natural gas and renewables, has significantly decreased the demand for coal. West Elk used to produce roughly seven million tons of coal a year, and today they put out around four million tons.

This decreased demand means workers have been laid off. Many miners began work straight out of highschool, so they have little background to transition smoothly to new industries.

Those who’ve left the mine now work jobs including school janitors or baggers at grocery stores, which pay significantly less and are, “not nearly as fun,” according to Godwin.

Godwin has an engineering degree from the School of Mines, so more doors are open for him after the mine closes. People told him he could do anything he wanted with that degree, but he said he chose mining because it was hands-on and very visual.

As he looks forward ten to fifteen years, when the mine is expected to close, Godwin says doesn’t know what his new job will be and cannot imagine finding an industry that he likes as much as mining.

Godwin doesn’t mind people who push solar power, in fact he had solar panels on his last home. However, he says he gets upset by people who are anti-coal.

“I think it’s a great resource. It doesn’t do us any good to leave it in the ground and not take advantage of it,” said Godwin.

This opinion highlights the “ideological and political hurdle,” that people must overcome in order to switch from industries like coal to renewables, according to Mueller.

“A handful, maybe a majority of our students, are climate change driven, where they wanna see a better world, a better future,” Mueller said. But at SEI, there is no judgement of views or motives. Mueller assured that they gladly make solar energy training accessible to anyone. 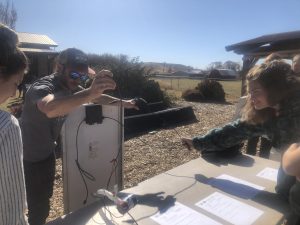 But for coal miners who don’t consider themselves climate driven, or are skeptical of human impacts on climate, it’s hard to see solar as appealing. The danger of running heavy machinery and working underground as a miner means paychecks are big from the start, to compensate for risk.

“The pay scale is just really not the same. A person would have to take a cut in pay,” admits Mueller, regarding switching from coal jobs to solar jobs.

But economic benefits certainly exist in the solar industry. There is potential for job growth, and a range of positions other than simply installing solar panels. That includes marketing, advertising, engineering and product design, which can supply a good salary.

New jobs in renewables are helping to diversify the economy in Paonia, which is so dependent on coal that it will likely take a big hit once West Elk closes. Also, a shift to more solar energy production can help communities move away from importing fuels and become self-sustaining in terms of energy.

“Whether liberal or conservative, both people support the idea of independent energy,” said Mary Marshall, Marketing and Communications Manager at SEI.

Looking past political differences and contrasting views on climate change, solar energy offers economic and environmental benefits. Coal miners have no choice but to find new jobs as mines close down. Though many aren’t welcoming the solar industry with open arms, we are likely to see the renewable industry grow regardless.