ERIE- Weld County resident Amanda Harper is fighting for her home — increasingly under assault by an expanding fossil fuel industry — and is counting on Colorado voters.

On a recent afternoon, she stood tall on a road in front of her yellow brick house, surrounded by acres of misty farmland pockmarked by oil and gas industry facilities.

Her hair was piled into a messy bun. She wore billowing pants, and threw a dirty tennis ball for her dog, Puck. The landscape is serene apart from the constant, low hum of drills. An industry truck rumbled by as she spoke, kicking up dust.

“I feel like something came our way and changed our life,” said Harper. “All of a sudden I was in this battle.”

Harper is one of many activists against hydraulic fracturing, or fracking, and has fought for five years to stop fossil fuels extraction near her home.

Distracting noise, lights shining late into the night, and the smell of diesel fuel disrupt her day to day life, she said. The lights are like “a car dealership” and there is frequent “clanging and grinding.”

Across the county, Christiaan Van Woudenburg, a trustee of Erie, lives next to a fracking site. He has projected giant anti-fracking slogans onto the sound walls surrounding fracking operations, among other tactics for fighting industrial expansion near people. Van Woudenburg said he worries about the health of his two daughters.

“I haven’t opened my windows in two years,” he said, referring to the strong fumes that waft up from nearby sites.

The American Lung Association supports “strict regulations” to the oil and gas industry to protect lung health, according to their website.

Harper installed a $900 air purifier. She said that, although she is surrounded by beautiful farmland, she has to go inside when the fumes get too bad.

There is potential for change. Both Harper and Van Woudenburg are counting on Proposition 112. This measure on the ballot for next week’s election would increase the required setback distance to 2,500 feet between new oil wells and homes, schools, and water sources. The current distance is 500 feet.

Proponents say bigger buffers would ensure benzenes and other pollutants dissipate before reaching people. They say buffer expansion would also prevent people from getting injured in the event of an explosion or fire.

“We were going to get old here, my husband and I,” Harper said.

“That was our plan.” 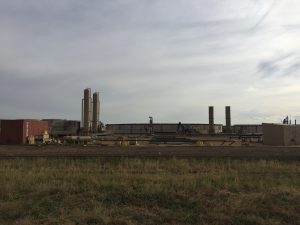