SUMMITVILLE – Toxic mine sites can never be fully restored.

In 2021, Rio Grande County and the state of Colorado will take over ownership and operation of the Summitville Mine Site, one of the worst Superfund cleanups in Colorado history. Ongoing containment operations at the site will cost Colorado $2 million annually – indefinitely.

“You always look back,” manager of multiple Superfund sites for the Colorado Department of Public Health and the Environment, Mark Rudolph, said, “and ask yourself how could I have done it better?”

Prospectors found gold in the San Juan Mountains in the 1860s. In 1873, the Brunot Treaty gave the Southern Ute $25,000 annually in exchange for nearly 4 million acres of land in the San Juan Mountain area. Tunnel mining operations quickly commenced. By 1885, there were more than 250 individual mining claims, despite the high elevation and harsh winters. At its peak, Summitville was a boomtown with more than 1,500 residents. 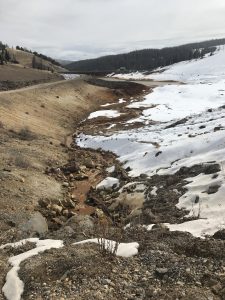 The 20-year reclamation part of the project is complete, with the cyanide leach pads capped and a lime-and-mushroom compost tilled into the mine waste. Sections that were once scarred rock have been recontoured to look like gentle grassy slopes. The side of South Mountain, however, can never be fully restored, Rudolph said, and bright orange wastewater still trickles down the mountainside into a retaining pond.

“It will be operating forever,” Rudolph said of an $18 million water-cleaning plant recently installed at the site, which neutralizes several hundred million gallons of acid mine runoff every year, Rudolph said.

As Rio Grande County prepares to take ownership of the 1,400 acre site, located in the Rio Grande National Forest above the San Luis Valley, there is an opportunity for increased recreational use.

Still, “Superfund takes primacy,” Rudolph said. No large recreational developments will be considered, and restoring the site to pristine wilderness is impossible, he said.

Lessons have been learned from the Summitville disaster. Colorado natural resource officials now require mining companies to give hundreds of millions of dollars to the state before starting operations, in order to cover potential cleanup, Rudolph said. 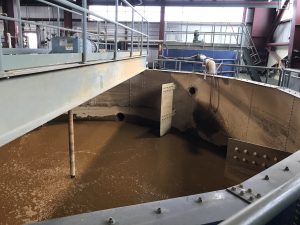 There are about 23,000 abandoned mine sites in Colorado, the Colorado Geological Survey (CGS) has found. Many of them are on public land. About 230 of those inactive mine sites are known to have “kill zones,” where toxic drainage wipes out vegetation below tailing piles.

And mining in Colorado is ongoing. There are more than 10,000 active mines in Colorado, mainly in Gunnison, San Miguel, and Montrose counties, according to CGS data. The reality is that many everyday products, from computers to water bottles, require mined materials.

“If you can’t grow it, you’ve got to mine it,” Rudolph said.