ROCKY MOUNTAIN ARSENAL REFUGE – Just outside of downtown Denver sits land that looks as if it has never been settled.  Mammoth buffalo graze the plains, herds of deer seek shelter from the beating sun under trees, lone coyotes scavenge for prey, and prairie dogspeer up from holes. 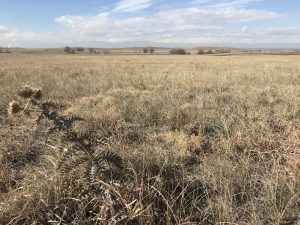 All the while skyscrapers and industrial emissions fill the horizon. This refuge from urban life has a long history. But today, as the Rocky Mountain Arsenal Refuge, it serves as a protected habitat for Colorado’s wildlife.

Decades ago, this was a poisoned land. During WWII, the land was used by the US Army to create and test chemical weapons. Following the war, Shell Chemical Co. used the area to produce chemicals for agriculture, including DDT.

Pesticides and insecticides had become tools of agriculture. Farmers wanted to mitigate damage, diseases, and the impacts of insects. Common practice for many chemical treatments was to spray entire fields. Lack of precise spraying resulted in chemicals leeching into unintended soil and waterways. This leaching posed a threat to both humans and the environment. One of the most dangerous and controversial was DDT, a pesticide later banned in 1972.

In the 1980s, the Army and Shell started a $2.1 billion cleanup of the site. Using a slurry wall to block further contamination of groundwater and gathering contaminated soil into landfills was the key to recovering this area, said David Lucas, refuge manager.

The remedy is working as designed, he said.

Bald eagles have since returned to the arsenal.

“There’s so many ironies out here. So, you have this place that’s making this chemical that’s killing our bald eagles. Its thinning their eggs across the country. We’re listing bald eagles as an endangered species. But yet, in the 1980s, bald eagles returned to the Rocky Mountain Arsenal,” Lucas said.

In 1992, Congress designated the arsenal as a wildlife refuge.

The arsenal is emerging as a healthy short-grass prairie habitat.

“This place now is a stepping stone, a window into a larger network of Fish and Wildlife conservation,” Lucas said.

The arsenal is a 15,000-acre part of an 800 million-acre natural system designed to restore and protect ecosystems.

Today, the land is a refuge were both people and wildlife can exist in the same place.

“It’s kind of this weird cycle, this place is making stuff that’s hurting these animals, but they came back, and kind of led to some of the creation of It,” said Lucas.

The refuge shows nature’s resilience and an ability recover, so long as it is protected.