SUMMITVILLE — On a cold, windy day in late October, snow blanketed the remains of an industrial gold mine above timberline in the Rocky Mountains. It fell on the jagged, step-like grooves of a reconstructed mountainside. It covered a small bump in the landscape—the only evidence of cyanide waste, now sheathed underground in plastic. It melted in a creek that flowed down towards a lake. The water was viscous and orange like rust. 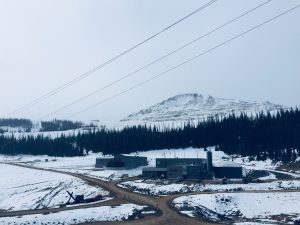 Mining began at Summitville in 1873. Today, it’s a Superfund site.

Modern society demands minerals. There’s aluminum in your bicycle. Petroleum in your smartphone. Gold in your microwave. In the United States, people rely on 25,000 pounds of nonfuel minerals every year, according to the U.S. Geologic Society.

“If you can’t grow it, you have to mine it,” said Mark Rudolph, cleanup and restoration manager for the Colorado Department of Public Health and Environment.

Mining can have disastrous environmental consequences. In Colorado, 230 mines continue to contaminate thousands of miles of waterways, according to the U.S. Environmental Protection Agency (EPA).

Rudolph oversees the cleanup at the Summitville Mine, an operation that costs $2 million per year for the state’s taxpayers.

A domed facility located in the alpine tundra of the San Juan Mountains filters out sludge from the contaminated water. Workers pump in lime to lower acidity, churning the toxic, metal-laden liquid through different vats and tubes until water is clean enough to release back into the river.

Still, there are other plans in mind for the Superfund site. 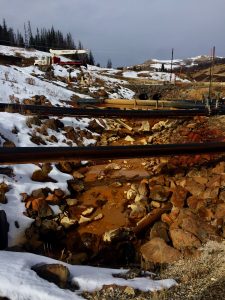 At a parking area overlooking the Summitville site, a crane recently hoisted a bathroom stall into the air. Workers in hard hats helped guide it down onto a concrete block.

A county commission looked on.

Why a public restroom?

In the future, skiers may trek up to the powdery slopes of the Superfund site, said Rudolph. A geology camp could host students in the summer, and travelers intrigued by the abandoned gold rush cabins could hike trails.

The nation’s process for dealing with environmental disasters favors redevelopment. Across the country, former contaminated, industrial sites have become golf courses, sports fields, playgrounds, and housing communities, such as Gold Hill Mesa on the west side of Colorado Springs.

Rio Grande County anticipates visitors will come to Summitville. A few feet away from the crane, four laminated placards tell the story of the mine.

“As gold and silver were discovered in other parts of the San Juan Mountains,” the first one reads, “the Brunot Treaty (1872) removed the Ute Indians from their ancestral homelands and made it safe for miners to venture into the mountains.”

As it turns out, the history is perhaps more complicated than what’s presented at the site. 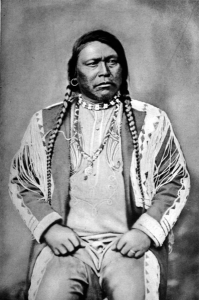 The Brunot Treaty was actually the Brunot Agreement, signed in 1874, according to the original government record. It was negotiated between the appointed leader of the Utes—Chief Ouray—and Felix R. Brunot—an employee of the U.S. federal government and chairman of the Board of Indian Commissioners.

The agreement granted the U.S. government control over the San Juan Mountains. In compensation, the Utes would receive $25,000 every year. If given permission from the government, tribes could still hunt on the land.

To persuade Ouray to sign the deal, Brunot promised to find and return the chief’s son who had been kidnapped and traded to the Arapaho, according to the 1873 Annual Report of the Commisioner of Indian Affairs to the Secretary of State.

But Brunot failed to do as he promised. Although he did try to find Ouray’s son, he didn’t find the right one. He brought Ouray an Arapaho boy named Friday, according to the report. It wasn’t Ouray’s child.

Rudolph acknowledged this questionable conduct in the 19th century. Utes were removed for the “safety” of gold pioneers, according to the Summitville placard. Their land was then desecrated. 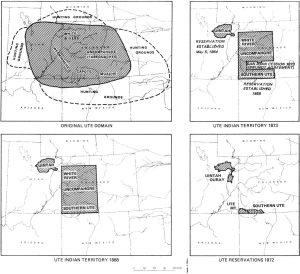 The cessation of Ute land

“I would be pretty upset at what was done,” said Rudolph.

The Brunot Agreement was one of many land cessions that squeezed the Ute Nation onto smaller and smaller parcels of territory.

Ouray might not have anticipated the widespread damage of mining. Once it was done, the land was altered—and the water was contaminated. Mining is a disaster that spreads downstream.

“At present, the Colorado people only want the mines,” said Ouray, according to the 1873 report. “We want to know that our country will be kept for us.”

Was their country kept for them?

The Ute people still seek access to their ancestral land near Silverton and the Gold King Mine. They come to hunt and collect plants, such as bear root. 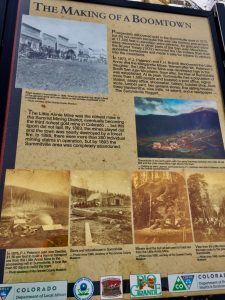 At Summitville, there’s little evidence of what the landscape once looked like. Grainy, black-and-white photos on the placards depict the clear-cut forest and wooden buildings of the mining town.

Today, it’s a scarred mountain and an orange stream. The water treatment facility tries to clean up the past.

“You always second guess,” said Rudolph. “To what extent is clean, clean?”