On Friday, my little sister, Jacci, caught a ride down to LA from where she goes to school in San Luis Obispo. We thought it would be a good idea to take an Über to Santa Monica to go to the beach (the beach was a good idea, not the Über in heavy traffic). There are a lot of people in Los Angeles. 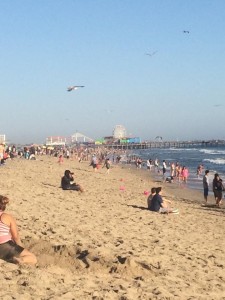 There are a lot of people in Los Angeles because “you have to be here.” This is something we have heard from the people we have visited around Hollywood, from CC alumni trying to get traction in this industry, and from our professors.

Our friend from home, Hannah, met us at the beach. Hannah is a young composer getting her start in LA. She has only been here one year, but has been able to save money by sharing a bed with her older sister, and get jobs assisting big-name composers. Currently she is working with James Horner on a new film, and that’s very cool.

I talked to Hannah for a while about living in LA. We are from a colder, quieter place in Washington with no traffic, and she is an introvert. She did find it hard to live in LA at first, but, of course, “you have to be here.” If there’s anything I’ve learned here it’s that if you want to get into the industry, you’ve got to make the connections, and you can’t do it like you can here – I’ve met sound engineers for big name artists at karaoke bars, songwriters for Danish musicians trying to break into the US scene in the Oakwood hot tub,  and Kenyon connected with a TV screenwriter in line for the water fountain. That kind of thing. Hannah’s doing it right – she’s meeting the right people in the right place, living her dream career. Turns out she is good friends with the son of Guy Moon, whom we got to hang out with on Friday afternoon in his studio. 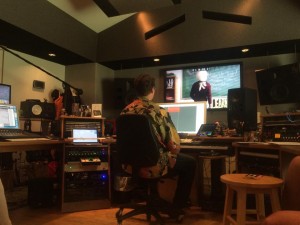 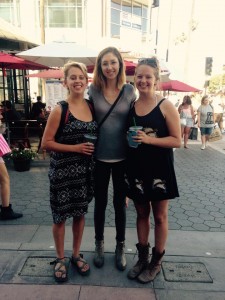 Vanity Fair West Coast Editor Krista Smith advised us to “have goals, but keep going — things change.” Many of us realize that though we have the goal of becoming a director, a writer, or a producer, those aren’t jobs that you just get out of college. Krista told us, “There are many stages to a career – life has very very very many incarnations.” Harrison Ford was a carpenter until he was cast as Han Solo. I think Charles Bradley was like 63 when he released his first album. That kind of thing. That advice is both reassuring and exciting to me.