During my time at Pine Ridge, it became clear that the entire Lakota culture is organized in a more circular fashion than dominant Western culture.  From reading Black Elk Speaks by Neihardt, it is clear that the Lakota people are very tied to the land and pay attention to natural cycles such as the daily cycle, seasonal cycle, circles in the four directions of space, and even see cycles through time (1972).  Humans are born, age, die, travel through the spirit world and then are reborn again.  In spending time speaking with Lakota elders, it becomes clear quickly that even the thought processes of these people are more circular than linear.  Instead of answering questions by giving the listener a fact and arriving at a conclusion by a chain of reasoning, the speaker will often talk about something seemingly unrelated at first, then answer the question by gradually making clear that the unrelated topic is the context which is required to answer the question.  Given that the Lakota understanding of the world is so circular, it should hardly be a surprise that there are many uses of circles in the peace pipe ceremony, sweat lodge and yuwipi.

Some examples of the way circles are used in ceremony include the honoring of the six directions before using the peace pipe.  The sweat lodge itself is a dome shaped structure, and during all three of the above ceremonies, all the humans sit in a circle.  In pipe ceremony and yuwipi, everyone in the circle gets a chance to voice a prayer to Great Spirit.  No one is left out and order is often strictly clockwise.  Lastly, the structure of the yuwipi ceremony through time is somewhat circular.  First, the spirits are greeted, then the spirits appear and are welcomed.  Everyone then gives voice to their gratitude and prayers one by one in a clockwise order.  The spirits are then thanked, which takes the same form as welcoming the spirits earlier.  The spirits then depart which takes the same form as greeting the spirits at the beginning.  This symmetry in ceremonial form has a circular effect through time. 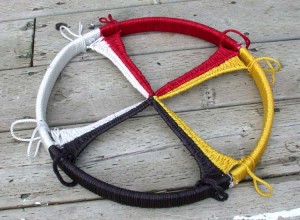 There are several religious frameworks by scholars which may help us understand why circular imagery is indispensable to Lakota ceremony and thought.  The first of these has to do with a uniquely circular state of mind called flow.  One of the markers of this mindset is that action and awareness are a result of merged-flow and are non-dualistic.  Another pertinent marker is that there are no goals or desires separate from the state of flow when this state is achieved (Turner, 1976).  What this means is that there is no gap between thought and action.  Thought spontaneously creates action which spontaneously gives life to thought.  Action and awareness can be conceived in this circular pattern because one does not cause the other.  They are the same.  Because there is no desire for anything beyond this state when in flow, nothing outside of flow can interrupt the cycle of awareness giving rise to action giving rise to awareness.  Ceremony in turner’s view is structured by the interplay between flow and anti-flow, which is a state more familiar and ordinary to humans (1976).

Another framework that is similar to Turner’s, focuses on cycles at the core of the religious experience that involve the way in which religion functions as a means of understanding the world.  The definition that Geertz gives of religion itself is, “religion is a system of symbols which acts to establish powerful pervasive long lasting moods and motivations in humans by formulating conceptions of a general order of existence, clothing these conceptions in such an aura of facticity that moods and motivations seem uniquely realistic” (Geertz, 1993).  In order to understand the circular aspects of this definition, one should note that each part of the definition directly impacts the next part of the definition that Geertz gives.  That is, the philosophical system of symbols we choose impacts our psychological moods and emotional state.  This state in turn creates a theological framework explaining these moods which becomes so real that we accept it as part of external reality.  This conception of external reality reinforces the set of symbols we chose in the first place.  In this way, Geertz’s conception is fundamentally like Turner’s state of flow where action and awareness are one, if awareness is interpreted as conceptions about the world and action is interpreted as external manifestations based on these conceptions.  Clearly, the two models are not exactly the same.  Geertz is concerned with abstract concepts, and Turner’s use of flow deals with the thought and action of an individual.  However, the circular nature of our thoughts influencing action which influences thought is present in both models. 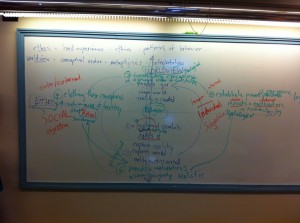 The question then becomes, how easily can we apply these models to explain why there are so many circles as symbols in Lakota ceremony?  The models were made to come to some conclusion about the nature of religion, either at the formative symbolic level, or about the dynamics of flow/antiflow common to all individuals participating in ritual.  Specific elements of ceremonies require some amount of interpretation when applying these models.  One possible interpretation of all the circular elements in Lakota ceremony could be that the Lakota people recognize that there is a circular process occurring for each person participating in the religion or that the fundamental building blocks of religion represent a circular process if the models are truly without fault.  They then include external reminders of the circular nature of this process in the ceremony to make the external world more congruent with the internal process that is occurring for individuals and through time collectively.  Turner’s model is more applicable, and supports this conclusion more than Geertz’s model.

The reason Turner’s model is more useful is because flow actually occurs during Lakota ceremony, and there is a case that Lakota medicine men are both aware of this flow state and try to encourage it during the ceremony.  While Lakota community members would not use this language, they repeat often that it is important to act and think from your heart rather than your mind during ceremony.  This results in the dissolution of the ego, which is another marker that Turner offers for realization of flow state (Turner, 1976).  In addition, the vocalizations during sweat lodge are often spontaneous, implying that no thought has gone into the action, and action and awareness are one.  It seems likely that if there is a conscious awareness that the flow state is desirable, and that the point of the entire ceremony is in some sense to achieve this state, the circular symbolism could be tied to this flow state.  Turner’s model is a good fit for the sweat lodge experience.  In fact, the actual experience may be far more focused on flow then Turner’s model which balances flow and antiflow (1976).  The ceremony seems to be consciously directed toward achieving this flow state constantly rather than achieving a balance between the two states.  Of course the ideal of constant flow state is never reached.  In addition it may be difficult to apply the model to such a specific part of the ceremony as circular symbolism.  While my framework could explain the circular symbolism in the ceremony, it could just as easily be a reflection of the Lakota view of nature and balance.  That is, the root cause may not be the circular process of flow, but rather a mirror of other circles the Lakota people see in nature.  Turner’s framework does nothing to privilege one interpretation over the other.

Geertz is not useful in linking the circular nature of religion to circular symbolism in ceremony.  The argument must be that the Lakota have a conscious understanding of the circular way religion itself functions for society and mirrors this in ceremony using circular symbols.  This understanding is unlikely because true understanding would involve realizing that the beliefs set in “an aura of facticity” (1993) are simply beliefs.  If the Lakota do not question these beliefs, there are no grounds for claiming that there is circular symbolism in ceremony because Lakota understand the nature of religion as circular in the same way that Geertz does.  None of my experiences at Pine Ridge led me to believe that they do question this aura of facticity.  Even if they do recognize these beliefs as merely beliefs, contrary to my personal experience, suddenly there is a hole in Geertz’s model itself, because it is important that the concepts appear real so that the conception of reality can impact the set of symbols created in the first place.  If the concepts do not appear real, the model is no longer cyclical.  In either case, Geertz’s model fails to explain the presence of circular symbolism in ceremony.

In conclusion, Turner’s model provides a basis for explaining why there is circular symbolism in Lakota ceremony where Geertz’s does not because there is a strong conscious understanding of flow dynamics in Lakota culture.  I have tried to articulate this connection while being aware that it is only an interpretation.  It would be foolish to merely rely on personal experience to come to this conclusion linking flow dynamics with circular symbolism and state it as fact.  Unfortunately, the models are not too useful for exploring specific elements of religious ceremony and were originally meant to be used to explain ceremony as a general concept.  This shortcoming is where personal experience becomes useful.  Because the models are limited in scope, personal experience can bridge the gap and offer an interpretation that is not objectively verifiable, but a possibility which extends the limited scope of the models.  Ultimately, models and experience are equally useful but give two different types of information, which when used together can reveal connections previously undiscovered.  Just as the model alone is limited in scope, experience alone should not be used to articulate universal principles.  It is the joining of conceptual model and experience that clothes my interpretation in an aura of facticity.