Tobacco Use: Recreational vs. Ceremonial

For the Lakota people, tobacco is used as a communication tool between the spirit world and the physical world.  We experienced first hand how influential the substance is on the reservation.  We tied the tobacco into prayer flags, smoked it from a pipe after each ceremony and noticed how some of the the natives smoked like chimneys.  Little Mike encouraged us to offer tobacco if we wanted advice from him or his father.  He didn’t do this to ask for a fix, he believes that your prayers will be more powerful if the spirits are pleased with a tobacco offering.

When Celinda first introduced us to the sacred nature of tobacco she explained that our spirits in our breath mixed with the tobacco smoke which spirals out of our mouths and into the heavens.  These weren’t her exact words, but what I took from them will forever change my opinion of smoke.  I am a smoker, and although the habit is nasty and will kill me, there is a fondness in my heart for the smoke.  The delicate ribbons drift in the current of the air creating spirals that sweep away stress and distractions.  In the ceremonies is was easy for my mind to wander away from the supernatural world, but when that smoke slipped from my mouth I thought about the spirits within.

Obviously, I do not get this sentimental when I’m smoking a stogy outside of a party.  I don’t think that the smokers on the reservation would say that cigarettes have the same power as pure red willow tobacco.  I heard the Mikes affirm its pure quality several times and the method of smoking (a ceremonial pipe) made the experience separate from a cancer stick.  Celinda explained that we should never abuse tobacco and Big Mike himself told us he never inhales the smoke.  But when we first stopped at the gas station on the reservation we could tell that a lot of these people were addicted.  Smoking is allowed inside buildings and almost every adult native was smoking around the fire.  I observed Big Mike as he puffed and it sure looked like he was inhaling.

I bought a pack a few days into our trip.  I completely forgot that Bruce asked us not to (sorry Bruce!) but I was also happy to be able to share something with the people that gave us so much.  Jamie was stoked that I had a Camel Crush after asking her a bunch of questions about her life.  I also had some great conversations when I was sitting in a smoker circle late at night.  Obviously, we could have these talks without partaking, but there was a sense of community in a shared activity.  Tobacco has been used as a bonding tool for hundreds of years.  It is called the “peace pipe” because it was often used to declare peace against waring tribes when a treaty was signed.  It also creates a sense of peace within oneself which reverberates to the people around them.   In Native American tradition passing tobacco is a sign of friendship.  Back when it was treated sacredly, the people weren’t addicted to tobacco because it was only used when necessary.  Now that is it available at every gas station the tobacco is a harmful deadly substance.  The bond between smokers still exists, it is just corrupted by the need to smoke.

The cigarette companies have taken advantage of the Native American tobacco tradition for marketing purposes.  For example, American Spirits have a picture of a man with feathers and a pipe.  Notice the picture is red, white, yellow and black – the four sacred colors.  This image evokes a sense of natural and holistic smoking, when realistically the users of this product are not praying.  If they really called the spirits each time they lit up there would be chaos in the spiritual world because their thoughts are not on true prayers. 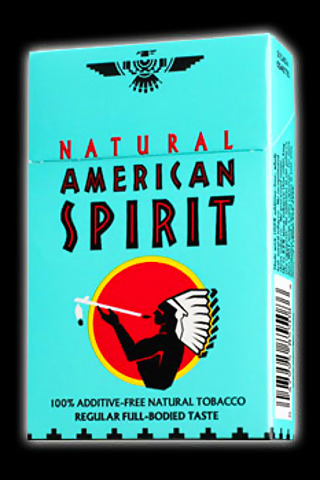 The dry tobacco we wrapped in red flags had meaning tied to them through our intentional prayers.  When we smoked after ceremony, our communal smoke mixed together and directed the spirits to our prayers.  But when we use cigarettes without thinking about the tobaccos’ power its influence is reduced.  It is still a bonding tool (think outside a hot house party) but it does not necessarily mean peace in the community.

I am not encouraging anyone to smoke recreationally (I regret starting all the time) but I do want to call attention to the multiple reasons that tobacco is powerful.  Recreationally and ceremonially, tobacco can be used to bond two parties or calm down a troubled mind.  Next time we smoke in ceremony I encourage you to watch the smoke disappear into the air taking your thoughts and prayers with it into the spiritual realm.

2 Responses to Tobacco Use: Recreational vs. Ceremonial