Bridging the Gap Between the Spiritual and the Academic (or, Pine Ridge Reflections)

Now that we’re back, I’m having trouble describing my experience in South Dakota beyond pretty vague and impersonal statements such as “it was really cool” or “pretty intense.” How to sum up a week of driving, singing, sweating, ceremony, and making new connections and friendships? How to describe inexplicable experiences and emotions I don’t fully understand myself? How to talk about the poverty we witnessed across the reservation?

When, during the first week of class, everyone shared whether they considered themselves to be the type of person who immediately jumps in to new activities and experiences or the type of person who needs time to observe and analyze before fully participating, I thought I was somewhere in the middle depending on the situation and context. But after our trip to Pine Ridge, I see myself as more of an observer. During the whole trip, I found myself observing more in part because I had trouble resolving the personal/spiritual with the academic. Mike kept speaking about “education,” and, as a class, we even discussed his meaning and intention in repeatedly using this word. Certainly we traveled to Pine Ridge to learn first hand about Lakota spirituality and ritual; we participated in sweat, we climbed Bear Butte, we took part in a Yuwipi ceremony. And for many of us, these experiences became profoundly personal and spiritual. So how do we reconcile the spiritual nature of the trip with the fact that we are in an academic course and were on a field trip situated within an academic context? Was the “education” Mike spoke of academic, or was “education” referring to educating ourselves spiritually? Could it be both? It bothers me that in hearing about this course from so many friends, no one mentioned that Pine Ridge is one of the poorest places in America; that the unemployment rate hovers around 80%, that people freeze to death each year. I don’t doubt that others over the years haven’t had these same thoughts (indeed, I’ve already had conversations with fellow classmates about this), so why don’t they come up in conversation alongside personal, spiritual stories, especially if this field trip is about the Lakota, not us. In coming back, I want to share what happened personally, but also let people know about the community at large.

I’m still grappling with this issue of how to remain academic while simultaneously being open to new experiences, spiritual and otherwise. I also struggled with sharing my spirituality out loud, if that makes sense. During the Yuwipi ceremony, for instance, I had trouble focusing on being genuine while worrying about whether or not my prayers would merit a rattle.

Other general reflections about the week: The first time we participated in Sweat was a complete blur. When I stumbled out of the lodge after two doors, I had no sense of how long we had been inside, but I did feel lighter, refreshed even, perhaps because my sense of anxiety surrounding sweat was gone. I’d done it and survived, even if most of the time I had to focus on breathing and staying calm in such a small space.

My best experience with sweat happened Tuesday night. Tuesday itself was strange—I spent the day with half of the group inside Mike’s house, learning from Rose how to make prayer ties. We weren’t doing anything strenuous, but I felt exhausted. I had trouble focusing and only made 10 personal prayer ties before stopping to merely listen to Rose and observe what everyone else was doing. Having my prayer ties in the sweat lodge, however, gave me something to focus on besides the heat and sweat and lack of mobility due to how packed we were inside. Over and over, I moved through each of the ties, remembering the intention and prayers I put into each one.

I continued to feel exhausted on Wednesday; despite sleeping 10 hours Tuesday night, I still took two separate hour-long naps during the car rides (and still managed to fall asleep right away when we returned to the motel). So I’m not sure if the reservation itself affected my energy or what was going on with my energy levels, but the hike up Bear Butte definitely woke me up. Being in nature in various dimensions—from day hikes to simply running on the trail behind campus—is how I meditate on issues and problems in my life on a day to day basis, and I found the same thing happening on the hike up and down. I felt the most spiritual when I was walking by myself, silently thinking.

Thursday was a great day—between snowball fights, snowmen, and a cookout, I felt totally welcomed in the community and connected to our class and the people from Pine Ridge we had been spending time with. The Yuwipi ceremony that night, too, was one of the most intense parts of the trip for me, and I can’t quite explain to others (and even myself to some extent) what happened during that time, but I think that’s ok, maybe even good. 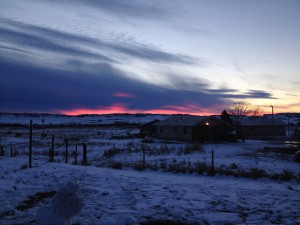 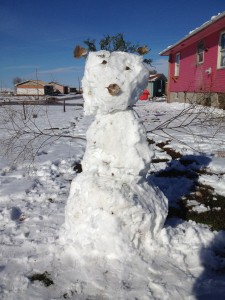 2 Responses to Bridging the Gap Between the Spiritual and the Academic (or, Pine Ridge Reflections)