The Past and Present, Educational Purpose, and “I” Statements

The thing that hit me hardest about Pine Ridge was listening, watching, and feeling the prayers needed there. This reservation is one of the, if not the, most impoverished and suppressed community in the United States. The reservation has a population of about 18,000, with about 17,000 identified as American Indian with the US Census. Only 22% have a high school diploma. The unemployment rate is 89%. The reality hit me more than the statistics.

The first place we saw in Pine Ridge was White Clay. This place was an immediate shock from the midwest farm country we drove 4 hours through. White Clay’s buidlings were al boarded up and looked vacant, with the exception of liquor stores. People loitered around the gas station, smoking and sitting, because there was nothing else to do. On a cement wall in spray paint was written “DEATH TO WHITE MAN.”

We saw the Black Hills on Wednesday, a nice change to the wide flat prairie. I slowed the van down on one of the curves so Mike could show us Mt. Rushmore. “You guys say we came across the ocean or across the ice before here” Mike said. “From the sky, these black hills look like a human heart. We originated here. We used to live in a circle here and we used to be able to pray from our homes.”

Mt. Rushmore is a symbol of conquering, he said. The faces represent the dominant capitalist culture and its ownership of the sacred place. 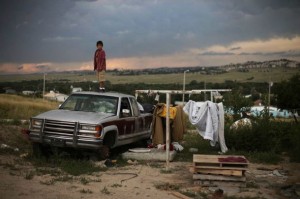 One of an incredible series of Pine Ridge Photos by National Geographic photojournalist Aaron Huey: http://www.aaronhuey.com

First the Lakota were conquered. Then they were removed from their land to a reservation.

They were able to “continue their way of life” on Pine Ridge reservation, but their resources to live sustainably were taken from them. The loss of the Buffalo and the loss of access to sacred places suppressed them.  So the Lakota had to adapt to the Western culture and way of life, but there is no stable economy or resources within the reservation. Liquor stores and casinos come with unemployment, and people sell drugs or practice other illegal activity to feed their family. They are not under state law, so the federal law gets involved. The reservation is stuck in a complex downward spiral of social problems rooted in 300 years of suppression. The problems in history are still relevant today.

Three other students and I took a walk on Thursday evening around Mike’s neighborhood. On the loop back, two black Sedans pulled in and began patrolling. They looked out of place in the narrow street of rusty trucks and stray dogs. They pulled up to us, rolled down the window, and sure enough exposed two white officer’s faces. “Ladies,” he said with a huge folder open in his lap, “do you know a lot of people around here?”

The officers moved on to question a man on his door step and knock on doors. No wonder people here hate the U.S. government.

“Rely on yourself,” Big Mike said a few times. “You might have a friend, but then he steals from you. You need yourself.”

I never completely understood this advice he gave us in relation to life on the reservation and ceremony. In fact, I got so frustrated with the “I.” “I” feel this way in ceremony, “I” pray for this, “I” want this. The focus inward seemed selfish and frivolous in a place where the “we” was so necessary. I too am proud when I am self-sufficient, but is he speaking in a political sense? Where the Lakota as a people want to be self sufficient? 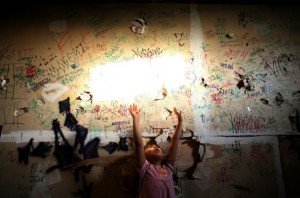 Jamie’s prayer on Thursday night moved me, and a lot of the class. She cried for “we,” and she prayed for her whole family’s hurt. Obviously she was hurting, but she cried for something greater than just her. She cried for her sister who found her deceased father, and for her brothers’ alcoholism, and her struggling nieces and nephews. A lot of the class cried too. How can I pray for one struggling family member and as for strength and courage when the people here need so much more?

“Nothing is impossible,” the Spirits told Mike.

I prayed for understanding a lot of the time. I still don’t understand a lot. I think some of it will take a few days of reflection, but most of it would take a lifetime of observation and experience.

2 Responses to The Past and Present, Educational Purpose, and “I” Statements