Crafts and their history

For my final project I researched the sacredness of tobacco and made a tobacco pouch.  I also looked up the history of Lakota dream catchers and made a dream catcher. Finally I explored the different prayer tie colors and what they represented and made a couple prayer ties of my own to bring with me to our last pipe ceremony tomorrow.

-provides connection between their culture and spirit world
-seen as a gift of the earth, plants roots in the earth, smoke rises into sky
-while burned the smoke was used to cleanse and heal
-social purposes to promote well-being and good thoughts
-not always smoked for leisure but rather a blessing from the creator
-used as offerings to the great spirit
-thought of as a sacred object like a bible or cross
-used as medicine
-put in the sacred pipe to connect with the spirits during ritual ceremonies like yuwipi
-smoke of tobacco represents the tangible presence of whope
-small puffs taken then held in the mouth, smoke was not to be enjoyed but meant to cleanse the air, heart, mind
-prayer
-smoke rises and takes prayers with it
-offerings
-burn tobacco before storms so they won’t hurt families
-purification
-taking something from earth they explain to spirit why they need it and offer tobacco in return for what they take
-respect
-don’t abuse it

These are what the different prayer tie colors represents:

This is the history and story I found about the Lakota dream catchers and the one Annie and I read in class.

Long ago when the word was sound, an old Lakota spiritual leader was on a high mountain and had a vision. In his vision, Iktomi, the great trickster and searcher of wisdom, appeared in the form of a spider. Iktomi spoke to him in a sacred language. As he spoke, Iktomi the spider picked up the elder’s willow hoop which had feathers, horsehair, beads and offerings on it, and began to spin a web. He spoke to the elder about the cycles of life, how we begin our lives as infants, move on through childhood and on to adulthood. Finally we go to old age where we must be taken care of as infants, completing the cycle.

When Iktomi finished speaking, he gave the elder the web and said, The web is a perfect circle with a hole in the center. Use the web to help your people reach their goals, making good use of their ideas, dreams and visions. If you believe in the great spirit, the web will filter your good ideas and the bad ones will be trapped and will not pass.

The elder passed on his vision onto the people and now many Indian people have a dreamcatcher above their bed to sift their dreams and visions. The good will pass through the center hole to the sleeping person. The evil in their dreams are captured in the web, where they perish in the light of the morning sun. It is said the dreamcatcher holds the destiny of the future.

I enjoyed learning the history about various crafts that we haven’t learned much about before and I really enjoyed being able to make my own. 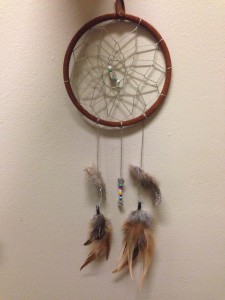 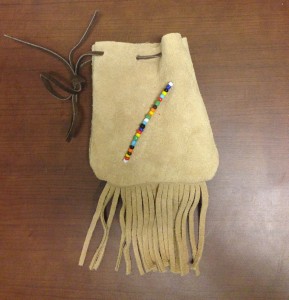