Economics of the Pine Ridge Reservation

First, for all you visual learners, here is our Prezi presentation for your enjoyment. Below is a short write-up of what we learned from during our independent research.

During our field trip to South Dakota, Becca, Caroline, Lauren, and I (Jenny) noticed a stark lack of economic activity on the reservation, which not only troubled us but also prompted our final project: an examination of the economics of reservations in general and Pine Ridge in particular.

In discussing the economics of the reservation, we quickly realized there is only so much we can understand because the reservation operates in a culturally different manner than the rest of the United States. Mitakuye Oyasin, a Lakota phrase meaning “all my relations,” encapsulates this issue; generosity remains a central tenant of Lakota culture, and, as Little Mike and Jamie emphasized, money often spreads among community members based on need. People do not necessarily spend their income in a way our Western economic models would predict. Our cultural bias hinders us from fully understanding the economic situation on the reservation, begging the question if anyone outside of the reservation can help, assuming that people on the reservation would even want outside help to begin with.

We also researched how people living on reservations generate revenue. With 460 total casinos run by tribes, casinos serve as a large revenue source for reservations. Indeed, Pine Ridge makes $1 million dollars a year from casino activity, but this figure is significantly less than how much other tribes make from casinos. Microenterprises (e.g., beadwork, quilts, repairs, cleaning, etc.) are another common way people make money, and 83% of households at Pine Ridge engage in some form of microenterprise. Unfortunately, since microenterprise isn’t registered with any government, it is considered a “Black Market” activity and does not generate tax revenues to be redistributed. Finally, various business in the private sector of Pine Ridge generate revenue: convenience stores, gas stations, video stores, fast food restaurants, and a single grocery store. 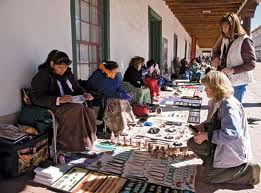 An example of microenterprise happening in Santa Fe, NM.

How, then, can, people on the reservation break the poverty cycle? Early childhood education is the most cost-effective method. Investing in preschools encourages development when it is most likely to have an impact on the child’s future.  Land zoning, by giving private property rights to businesses to attract private industry, would also increase revenue. Businesses understand the lack of public property rights as an incredible risk since they do not have legal property protections to fall back on. By creating viable shopping options on the reservation, money is kept in the community instead of channeling it into businesses like Walmart that exist right off of the reservation. Finally, encouraging Sioux Pride would boost the sense of community on the reservation, encouraging people to invest more in the reservation. First, however, Pine Ridge needs to develop basic infrastructure such as banks and housing. 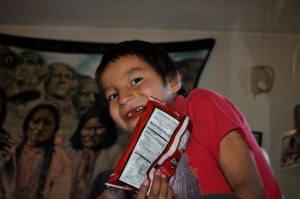 Educating Pine Ridge’s youth is one potential solution to the reservation’s economic woes. 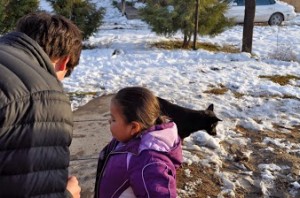 Ultimately, we decided the solution to Pine Ridge’s poverty involves finding a common ground between our cultures. As outsiders, we cannot necessarily grasp the complexity of how money moves around the reservation. Yet, empowering the Lakota with the basic resources and education to build wealth and health would serve as a starting point for change stemming from the community itself.

This entry was posted in Independent Projects. Bookmark the permalink.

One Response to Economics of the Pine Ridge Reservation