The controversies surrounding Mount Graham in Arizona in the late 80’s to present day make us think about the “age-old” debate of religion v. science. For the astronomers from University of Arizona the mountain was a prime location for their new observatory. However, for the San Carlos Apache tribal members Mount Graham, or as they call it dzil nchaa si’an, is a sacred land and space that should have eternally remained untouched. Mount Graham is located in the beautiful Southeastern Pinaleno Mountains in Arizona. The project called for the construction of new roads, deforestation, disregarding endangered species and the religious practices of the San Carlos Apaches. 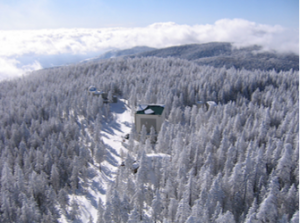 For generations this mountain has been the sacred place that consists of burial sites, ceremonial grounds and tradition. Also Mount Graham is a place where these Apache people go for spiritual journey and guidance. Many plants on the mountain also provide this tribe with medicinal uses and the mountain itself is a place that holds spiritual energy for the San Carlos Apache people.

The Mount Graham International Observatory was funded not only by the University of Arizona, but also international scientists and astronomers from Italy, Germany and the Vatican. An odd situation surrounding this observatory is its association with the Vatican. The observatory even has a nickname “the Pope scope”. It is apart of the Vatican Observatory, which is one of the oldest astronomical establishments. 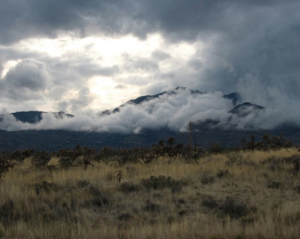 In 1997 the University of Arizona requested that all Apache’s must apply for permission to pray 48 hours in advance. In this “prayer proposal” the indigenous people needed to disclose the specific time and place they planned on praying. The University took this step to further infringe on this tribes freedom after they arrested an Apache man for praying on “their site”.

A very interesting fact to think about in this situation is that the University of Arizona already has an astronomy observatory on Mt. Lemmon, just 4 minutes from it’s main campus in Tucson. Hopefully there are solid scientific reasons why the University’s astronomers see the need for a second observatory in the epicenter of this indigenous people’s sacred land, over 3 hours away from the campus in Tucson. The observatory on Mt. Lemmon has been in use since the 50’s and was even used by the Air Force during the Cold War. It is easy to see how this “necessary” construction of the observatory on Mt. Graham seems greedy and unorganized.

The project that was supposed to be finished in 1992 has been stretched on for years because of the amount of controversies caused by the construction on Mt. Graham. The project was ironically originally called “the Columbus Project”, which was changed after much protest to LBT (large Binocular Telescope). Just as Columbus signified the beginning of struggle and desecration of land for the indigenous people of his time, so does the Mt. Graham Observatory project. Mt. Graham was originally an official part of the San Carlos Apache tribe’s reservation until it was taken away in 1873. 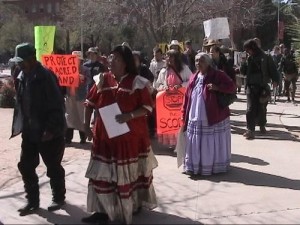 In reading “Fools Crow Versus Gullet” by Kari Forbes-Boyte, there are points raised that are helpful in the analysis of Mt. Graham and its controversies. The reading discusses the effect of the AIRFA (American Indian Religious Freedom Act) while discussing the controversies around Bear Butte and the relations between the South Dakota Department of Game, Fish and Parks and the Lakota and Cheyenne people. The controversies at Bear Butte and Mt. Graham are very comparable, in that an organized group was trying to take away the prayer ground and sacred grounds of an indigenous group. Forbes-Boyte states, “The connection between ritual and land is so strong that without the place the religions will die” (Forbes-Boyte 313); although this has not yet proven to be the case at Mt. Graham the religious practices are definitely strained by the creation of the LBT.

Another idea raised in this reading is the idea that religious ceremonies “managed to co-exist with the other uses of Bear Butte”, therefore it was acceptable for others to continue to use Bear Butte for other activities (Forbes-Boyte 312). However in Mt. Graham’s case this cannot be argued because the University has legally and physically tried to stop Apaches from praying and continuing their ceremonies along side the observatory project. The University went as far to arrest an Apache man for trying to pray and uphold his religious beliefs.

The University of Arizona not only arrested an Apache for praying, but demanded them to gain permits to pray. As a result of the controversies over Mount Graham the University became the first University to fight the AIRFA in court, seek immunity from the country’s environmental laws, and argue against listing an endangered animal (Helfrich 3).

The longstanding issue that the indigenous people struggle to help Americans understand their culture and religious practices is an issue that some hope will be solved soon. Without the full understanding some view it as easier to take their land and use it in ways that they do understand and find useful. In the Article “Star Struck” by Joel Helfrich, a traditional Dakota educator speaks to this difficulty of the Americans not understanding the indigenous ways, making it harder to protect the sacred land. The educator, Jim Rock, states “I would certainly have hoped that the astronomy community would have been willing to trade eyeballs with our elders and to see things from those mountaintops-through the eyes of those who have been to those mountaintops for millennia without the technology.” (Helfrich 5)

Helfrich and his co-writers speak to the sadness of the events that occurred around the Mount Graham International Observatory. They speak to the effect that the observatory project had on the people, sacred site, animals and environment. Helfrich describes it as a “historical failure of those astronomers to fulfill their responsibilities to do no harm to an imperiled earth and its peoples is sad and disappointing, especially since there was a better way in which they could have pursued their research goals” (Helfrich 5). There are many ways to view this project as a failure in itself, and the way that the University dealt with the indigenous people was an even bigger failure. Especially seen as a disappointment is that there seemed to be other ways to avoid this many problems over one project. The University could have not required permits to pray and allowed the observatory and indigenous people to co-exist to the best of their abilities. Some small changes could have made this whole situation a lesser disaster for the University and more importantly the San Carlos Apaches.

One Response to Mount Graham