Penobscot Nation and their River 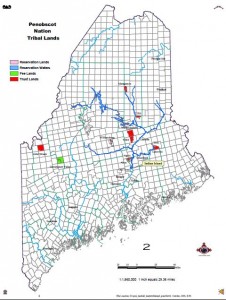 The largest river in Maine begins in the highlands, in the protected pine forests of Baxter State Park and peak of Mt. Katahdin. The river flows more than 240 miles to the Atlantic near Bangor (Browne, 2). The basin covers 8,570 square miles, about a quarter of Maine territory (Penobscot River Restoration). Since the glaciers retreated from the last ice age, humans flourished from a rich ecosystem on the banks of the Penobscot for more than 10,000 years (Wabanaki Timeline). As settlers colonized Maine and industry took off, the river and its abundant resources disintegrated. Ocean fish such as the Atlantic salmon have disappeared from the river. The Veazie Dam at the river’s outlet has prevented the sea-run and prevented the Penobscot Nation’s traditional practices. In 2013, through the help of several ecological organizations, the two major dams were breached and a fish passage was improved on a third dam upstream.

The Penobscot River defines the identity, spirituality, and livelihood of the Penobscot Nation. They use the river’s resources to create baskets, pottery, birch bark canoes, moccasins medicinal plant gathering (Orazio 2013). Since the river and its ecosystem are currently polluted contaminated by air, water, and land pollution, people have been hesitant to carry out their traditional practices (Orazio 2013). Without these traditions and practices, they will lose their connection to the river and lose cultural aspects supposed to be passed to future generations.

According to their creation story and legend, the Penobscot are related to the species in the river and are deeply connected to the life water gives:

At a ceremony to celebrate the restoration of the river in 2013, current Chief Kirk Francis reiterated the importance of the river: “The river is simply who we are. It’s the very core of our identity as a people and it’s simply the most important in the Penobscot Nation’s life” (Toensing, 2). For 200 years, the Penobscot were unable to use the rivers resources and harvest ceremonial salmon. Pollution and industry drowned the Penobscot cultural traditions and separated them from the river. 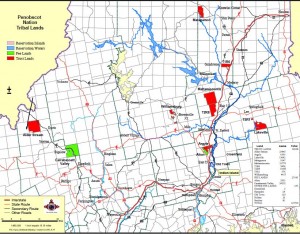 Focused image on current Penobscot lands. Indian Island, the setting of this event, is flagged.

Despite the land reclamation victory, western culture still dominates the use of the Penobscot River. On the Western Branch and many sections of the river, rafting and canoeing create a major recreation industry. In Millinocket, upstream from the reservation, logging is still heavily depended on. Several hydroelectric dams were also built along the Penobscot to generate energy.

Pollution from the industrial use of the Penobscot is a major problem. In 1987, industrial waste and discharges of dioxin were detected upstream from the reservation (EPA). The State of Maine limited the consumption of fish from the Penobscot River. In 1997, PCBs and mercury were detected as well. In 2013, the advisories are still in effect (EPA). The ecosystem in affected as well. Fish were unable to pass the dams, and the hundreds of thousands of Atlantic Salmon fishermen harvested from the Penobscot disappeared (Bidgood). The population of herring, a small fish consumed by birds, land mammals and larger fish, at Veazie dam was 54 individual fish in 2012 (Bidgood).

The United States Environmental Protection Agency allowed the state to monitor natural resources within Penobscot Reservation territory for that reason. The Penobscot Nation was outraged. In 2003, Chief Barry Dana said in a press release that “the EPA action is another example of the continued lack of respect and recognition of tribal sovereignty, both in Maine and across the nation. As a sovereign people, we have no choice but to fight this ruling to protect our resources and our way of life” (Penobscot River Restoration). After several attempted demonstrations and petitions, the Penobscot Nation formed a coalition that succeeded.

The project received national attention and support for its ambitious goal, particularly in Washington State where similar projects are taking place and in Patagonia’s environmental magazine. 62 million dollars later, the Great Works Dam was breached and a fisheries bypass was created at Howland Dam in 2012 (Carpenter, Toensing). Veazie Dam was removed in 2013. In compromise, Black Bear Hydroelectric Company will increase power at five other dams to make up for lost power (Wright).  An estimated run of 12,000 Atlantic salmon will restore the ecosystem’s health next spring (Wright).

At the Veazie Dam breaching on July 22nd, 2013 at Indian Island, the Penobscot held a ceremony. Former Chief Dana sang an honorary song, and the Penobscot Burnurwurbskek singers presented offering songs (Toensing). An elder also smudged the dignitaries on stage in front of hundreds of participants (Toensing). John Banks, the director of the Penobscot Department of Natural Resources told the press that the success of the shared vision was incredible: “I can’t describe how I feel in words—it’s right here. You saw the eagles—not one, not two, not three but four. They came in when they started drumming for the ceremony and they stayed” (Toensing). The ceremony celebrated the restoration of natural species to the Penobscot River and a revitalization of Penobscot tradition.

To Westerners, the return of the fish means a healthier river ecosystem. It symbolizes a “win” for the environmentalists and preservation. To the Penobscot Nation, the return of the fish represents a revitalization of culture and spirituality. The Penobscot Nation was unable to practice fishing in the river they came from due to the dams and pollution western culture introduced. Years of Penobscot efforts to reclaim their land and spirituality took a step toward success in coalition with major organizations. Western culture understood the breaching of Veazie Dam in an ecological, scientific sense. In this project, Western and Penobscot cultures had a similar goal and a shared vision. To protect indigenous sacred places, ecological values may be a successful method of appealing to the Western law. In this case, the Penobscot succeeded in protecting their spiritual practices at the same time. On the other hand, it will be increasingly more difficult for the Penobscot and other native cultures to preserve their tradition ways in an overwhelmingly Western culture.