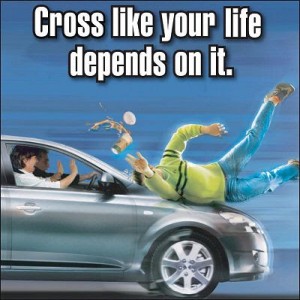 “One does not simply wait for pedestrians. One runs them down so as to herd them and remove them more quickly from the path of a car.” If there was an adage for London drivers, this would be it. If walking is scary (because from personal near death experience on many occasions it is safe to assume that a London driver would run you over and keep driving without a second glance) than running is frankly terrifying. The drivers have already trained themselves to think that pedestrians will move out of their way if they stomp the pedal, but when running you appear in the road with no warning and frequently gasp into the oncoming headlights of some pissed British cabbie. It’s really only a matter of time before I get squashed, just like its only a matter of time before I remember to look the right way before crossing the street. Come to think of it, the latter may prevent the former.
Another thought on pedestrians: when people tell you about London, they comment on the politeness of the British people. They must not have walked through the airport or a tube station or ever entered a crowded metropolitan area. Pedestrians don’t say excuse me. Rather, like the cars, they move you. More than once I have been directed by two hands on my shoulders out of the way, like a dog being moved from the feet. I think as long as I don’t get crushed by the tube doors again, I can let it go.