“God and I have become like two giant fat people living in a tiny boat. We keep bumping into each other and laughing.” -blessing shared by Anneliese Rice at Stories of Spirit

During fifth block, a group of students came together to celebrate the spiritual diversity of ColoradoCollege. The evening was called Stories of Spirit and was one of several faith week events with the theme of faith and humor. Students from many religious and spiritual traditions and identities including Muslim, Baha’i, Catholic, Hindu, Evangelical Christian, Buddhist, Seeker and Humanist shared stories, songs and reflections on the role of humor in their spiritual practice and tradition. The group laughed together through stories of poop jokes, sacred elephants sneezing on worshipers, friends screaming “Allah” in airports, ceilings crumbling and falling mid-meditation and Dan Lewis’ soprano gospel choir performance. The reflections and humor offered glimpses into the individual spiritual journeys of our peers. The evening was an important part of an ongoing conversation on the life of the spirit for CC students and demonstrated the power being on a spiritual path and part of a spiritual community has for many students in our community.

Many of the speakers talked about community. Colby Diamond, the first speaker of the evening, spoke about the openness of the Jewish community Hillel at CC. He talked about how much it has meant to him to share a meal with people from his tradition, as a child and now on Fridays for Shabbat with Hillel. The strength of these spiritual communities is not grounded purely in common belief, but rather in shared time and love. Nichelle Giraldes, who spoke of her involvement in the CC Catholic community said, “A community is not bound together by teachings and dogma, but by love and laughter.” People coming together to support each other, to worship together or just to share a meal and laugh is an incredibly valuable part of spiritual life for CC students. Candace Datz, who spoke of traveling the world as a Christian missionary prior to coming to CC, said she learned a lot about humanity through that experience and that people can be both the greatest and the worst thing in the world and in her religious tradition. Regardless of the trials community can also present, the foundation of people who care is an important component and draw of spiritual practice. Jaden Hawkinson, who does not belong to one specific tradition, has found this home in many spaces and communities. Jaden explained the importance of “cultivating a heart that can feel at home in many traditions, wherever you are.” Spiritual practice offers a way to connect with people on a deeper level and to form meaningful relationships and a sense of home in new places.

Those who shared stories also talked about how their religion or spirituality has contributed to their own personal growth. Krithika Vachali, who grew up Hindu, explained that spirituality gives you “infinite ways of adapting to what life throws at you.” Jaden spoke similarly of this power of spiritual practice. He said of the gifts of his practice, “When everything is just going so wrong, it is being able to find the joy in that.” Elyse Bassman explained how finding the first noble truth in Buddhism, that suffering is inherent in life, helped her to accept her anxiety. Elyse explained, “I became accepting of my anxiety, gentle towards it…. I let it be. The four noble truths let me relate to my anxiety with care.” Spiritual traditions give us resources to deal with the most difficult challenges of life. Elyse explained that her Buddhist practice makes her feel at peace and it can be as simple as pausing in the middle of the day to take a few conscious breaths. Regardless of the nature of the practice, CC students draw on their spiritual traditions to face challenges and to grow into balanced and healthy individuals.

The spiritual and religious traditions of CC students also provide a sense of something greater and immensely meaningful. Salsabeel Khan who is Muslim explained this feeling of something greater as like looking out at a wondrous view. Salsabeel said, “I like having something bigger to be grateful to, like when you’re staring at a beautiful view and you’re so small and you’re just speechless.” Zuri Randell and Mpesh Shongwe sang a Christian song from The New Testament book of Revelation that expressed a similar sense of wonder at the divine. In angelic voices, they sang, “you are my everything” and “I am filled with wonder at the mention of your name.” This sense of something greater and meaningful many speakers expressed as including compassion for fellow human beings or other livings things. Zoé Santos, who grew up in Bali shared a Hindu chant which he explained meant “May all beings be happy.” Saraiya Ruano, who is Baha’i included this call to compassionate action, to love your neighbor, as one of the things she loves most about her faith. Saraiya said, “What do I love about my faith? It calls me to action and makes me responsible to other humans.” Later Saraiya said, “Be concerned with the needs of the age you live in, man is organic with the environment, the inner world shapes the outer world and is shaped by it.” Many of those who spoke touched on this connection to something greater, and the drive for love and kindness holding this awareness can create.

The evening of Stories of Spirit was only a small part of a conversation that is on-going between CC students, faculty and staff about the importance, power and challenges of religion and spirituality in our lives. Spirituality is an important part of the journey for many CC students, and must be part of conversation. Salsabeel spoke of how it is sometimes difficult to combine the world of her conservative Muslim parents with the world of her secular humanist friends and the science she studies at CC, but that she knows it is possible! At the end of her story, Saraiya said, “We live in a time where people are often afraid to talk about faith and spirituality, but I want to talk about it! And I hope to hear your reflections past tonight; I hope this conversation is ongoing.” With religion and spirituality adding such beauty and power along with challenges to the lives of so many CC students, it is something that ought to be discussed openly and often on our campus. It is only through sharing more fully with each other that we will grow in community and in our ability to love the diversity of our world. At the end of the evening, Russell Clark shared a blessing from his Catholic tradition fitting for the event’s end. He said, “The stories have now ended, let us go forth in peace to love and save the world. Amen.” 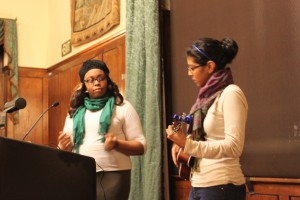