COLORADO SPRINGS – America’s wild places are increasingly swamped under a deluge of sightseers and adventure seekers. In 2013, national parks drew almost 274 million visitors nationwide. In 2017, they drew more than 330 million.

In Colorado, visitation at Great Sand Dunes National Park and Preserve during that period nearly doubled.

The short-term economic benefits to surrounding communities are undeniable. In 2016, the US Department of Commerce’s Bureau of Economic Analysis recently reported, the outdoor industry generated $412 billion. In Colorado, outdoor industry spending supported 229,000 jobs, nearly four times the jobs created by the oil, gas, and mining industries combined, according to the Outdoor Industry Association. But outdoor recreation may be destroying the very areas people seek wilderness in. 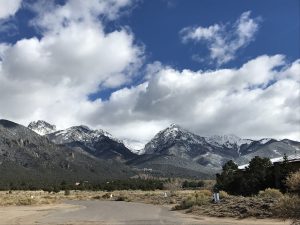 “Do you see that, young people who want to get out there on your bikes? Do you see what’s happening to the landscape?”

Steamboat Springs is a growing outdoor tourist destination that has been “decimated” by mountain bikers in the past decade, Canaly said.

“In my opinion, there are areas human beings shouldn’t even be going, certain times of the year,” she said. “That may sound revolutionary to some people, but to me it makes perfect sense.”

It’s Veteran’s Day weekend, and REI is having yet another sale. It’s snowing heavily outside, and cars on the highway are moving sluggishly, but the Colorado Springs store is packed with people. College students finger Patagonia fleeces, while small children run around the shoe area and families cluster around tent displays.

REI is one of the best-known outdoor gear stores in the country. In the past few years, it’s sponsored a line of outdoor apps, including Hiking Project, Mountain Biking Project, Mountain Project, and the National Parks app, which provide detailed maps and crowd-sourced reviews of trails and climbing routes, easily accessible on a smartphone.

“In order to really enjoy the wilderness, you have to get out there,” retail manager at the Colorado Springs REI Chris Condie said. “We’re more about adventures than just selling stuff.”

REI, and other outdoor companies like it, are on the forefront of the recreation movement. Their marketing strategies are designed to not only sell the latest gear, but actively persuade people to explore the wilderness. The outdoor recreation industry has been supportive of public land conservation, as in the case of the former Bear’s Ears National Monument. But they’re also an important factor in the deluge of use that conservationists like Canaly say are destroying ecosystems.

How can people enjoy wild areas without ruining them?

Land managers at conservation organizations including The Nature Conservancy (TNC), a global nonprofit dedicated to preserving critical lands and waterways, struggle with this dilemma.

In Washington state, TNC owns 8,000 acres of land. Some of that land, like forest bought from timber companies near the growing mountain biking mecca of Roslyn, is planned to be sold eventually. It will never be pristine wilderness. Instead, Washington state TNC land conservation director David Rolph said in a recent phone interview, TNC tries to restore the land and improve the value of it to the community.

And improving value often means building trails. At the REI national annual corporate meeting recently, 300 REI managers, led by former Secretary of the Interior Sally Jewell, helped construct a 2.3 mile trail on TNC land that led from Roslyn up to a wooded ridge with expansive views of the Enchantments mountain range.

“It’s beautiful,” Rolph said. And it will encourage the community to preserve the land once it’s sold, instead of auctioning off small sections for development, he said.

But some land is too sensitive to be developed like this. Some areas contain critical habitat for endangered species, or plant communities too fragile to disturb with frequent human use, Rolph said.

“Not all places are appropriate for all forms of recreation,” he said. “We have areas where we will never build trails.”

On the Washington coast, TNC owns the 7,600-acre Ellsworth Creek Preserve. It’s a previous clearcut that Rolph and other TNC employees are restoring to old growth. It’s an important spawning area for coho and chum salmon, and critical habitat for the threatened marbled murrelet.

Ellsworth has no trails, and Rolph said his team is removing logging roads on the property. While TNC is working with local Native American tribes to allow hunting and gathering in the area, public access is restricted.

But TNC still receives criticism by some groups for being too human-oriented and over managing the land, Rolph said.

“Some people say TNC stands for ‘That’s Not Conservation,’” he said. “They think we’re playing God in the ecosystem. They say, ‘let’s lock it up and let it grow back.’”

But TNC follows the most reliable scientific information for their land management plans, Rolph said. And in many cases, having community support is an important part of the process. In some cases the backing of the community is crucial for obtaining government grants or private donations.

“[Community support] gives us the social license to actually get our work done,” Rolph said.

And, he added, many people who would otherwise support conservation don’t want lands locked up behind private gates. Public organizations like the US Fish and Wildlife Service are more beholden to public opinion, but more autonomous private nonprofits like TNC still benefit from community support.

“Recreationists, historically and today, have been the biggest protectors of public lands,” Rolph said. 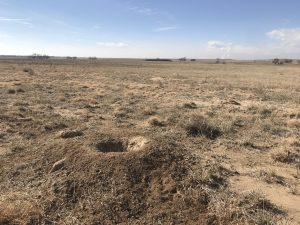 And according to Rocky Mountain Arsenal national wildlife refuge manager David Lucas, wilderness is not the only land that’s important for conservation. He manages 16,000 acres of reseeded native prairie that supports endangered black-footed ferrets and a 180 member bison herd. It’s just east of metro Denver near the airport, with skyscrapers looming on the horizon and frequent plane flyovers.

“This is a window into the larger organization of the United States Fish and Wildlife Service,” Lucas said of the refuge. “If all the work is out where people don’t see us, it’s hard to get that connection.”

“Maybe then, when somebody wants to punch a hole in some new wilderness, they’ll go ‘I don’t like that.’”