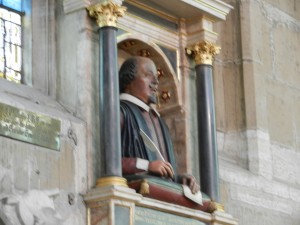 It isn’t difficult to wax poetic about England. In fact, it’s disturbingly easy. Everywhere you turn, England presents you with a monolith of feeling and thought. We aren’t here for very long, but everyday has been crammed with important sites one after the other. It’s overwhelming, to tell you the truth. I’ve been joking with my friend that this is less a class on Shakespeare and more an experiment to see how many places I can cry.

Embarrassingly enough, my crying chronicles started at King’s Cross station when Steven Hayward said, “And this is where Harry was dropped off for Hogwarts.” I wish I can say that I feigned tears here, but that would be a lie. I started sobbing.

The same thing happened to me at Westminster Abbey when we got to Poet’s Corner. I saw the plaque for Dryden and lost it. I must have sat there blubbering for fifteen minutes (much to the concern of my fellow tourists…I’m sure they thought I was mentally unsound). 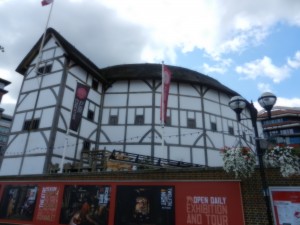 It’s taken me a bit, but I think I’m starting to understand why London is having this effect on me. Why every day seems so packed and why I’m prone to tears. It’s all about origins. In America we have a sort of builder’s problem. If we want something, we tear something down and build something entirely new (I mean this literally as in construction, but this can be taken on a more metaphorical level if you so wish). In England, if something new is required they renovate and adapt. Train stations are in buildings hundreds of years old. Pubs from the 1800s are not uncommon. It doesn’t take long to realize that London is really, very old.

What’s more is that most of the things I care about (books, poetry, Harry Potter) come from England. I feel nostalgic for a place I’ve never been because it’s a home for my passions, a birth and burial place for people I’ve never known but whose work has made me love them.