Class started Thursday and in the afternoon we had our first day trip – to Monument Creek, which runs next to CC, where we learned how to apply the scientific process in geology by observing and sketching a rock outcrop running across the riverbed. Discussing and analyzing as a group we found it to be shale formed at the bottom of what was once Inner Cretaceous Seaway that ran through North America. Our field books, hand lenses and rock hammers freshly used, we were ready for a real field trip! After only two days in the classroom learning some basic geology processes and vocabulary, we packed into three vans and drove into the mountains. 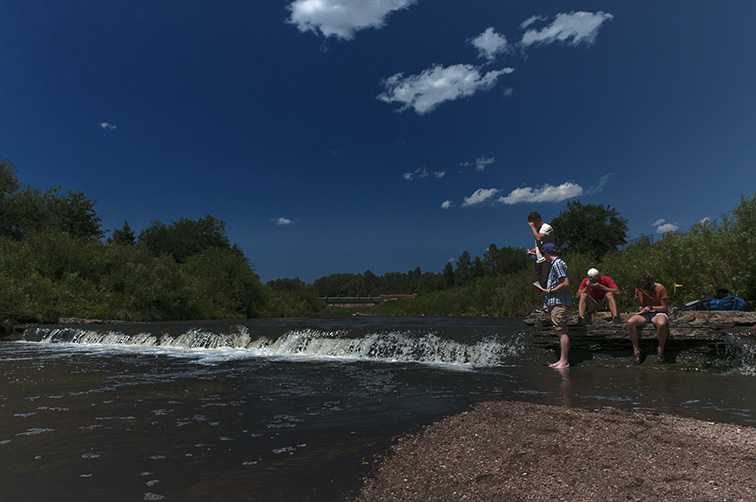 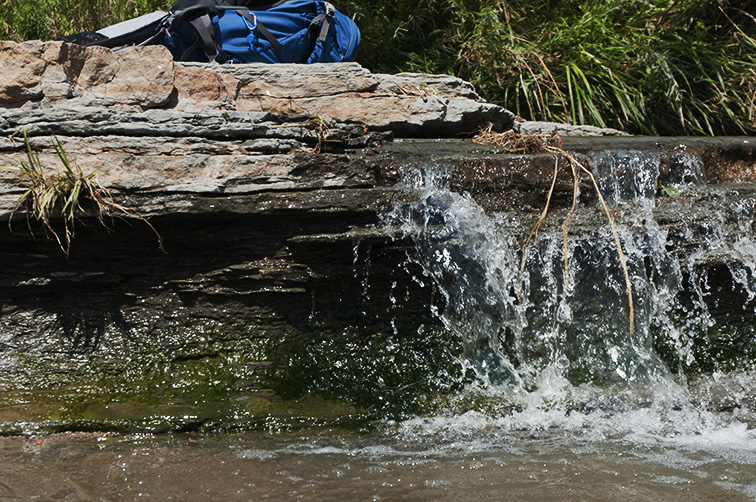 All beginning geology classes require the memorization of the geologic time scale: the basic period of the earth from the early molten lava stage (the Hadean period) to our current Holocene period, which covers the last 10,000 years. Instead of having us simply memorize these from a piece of paper, our professor Zion assigned us each one period and took us to the Arc Thrift Store where we acquired costumes inspired by our respective periods.  For instance Lily (pictured) had Devonian, the period in which the first insects appeared so she dressed up like a big bug to get into character. We regularly line up in order, or trade periods and costumes and line up in order again, which has let us experience the geological history of the earth in a spatial way. 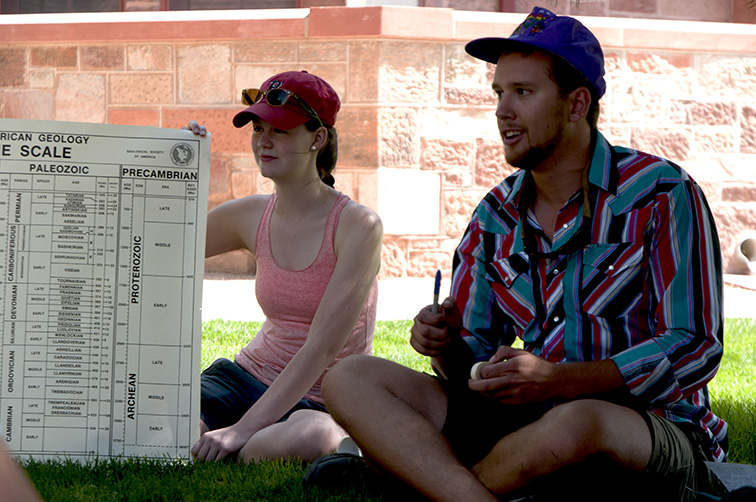 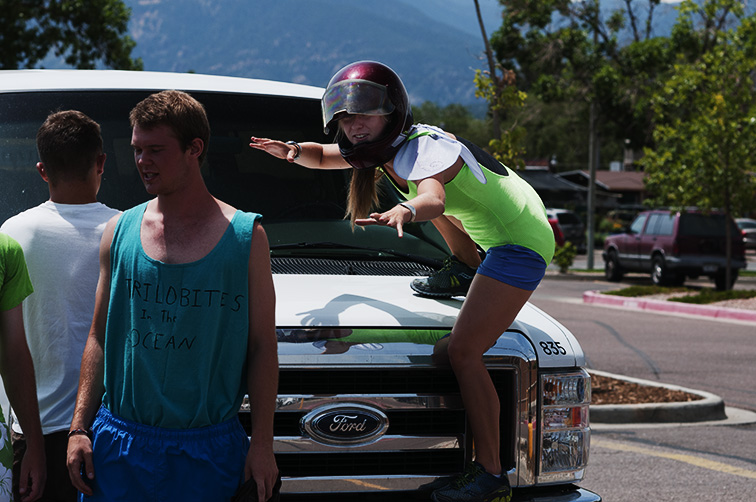 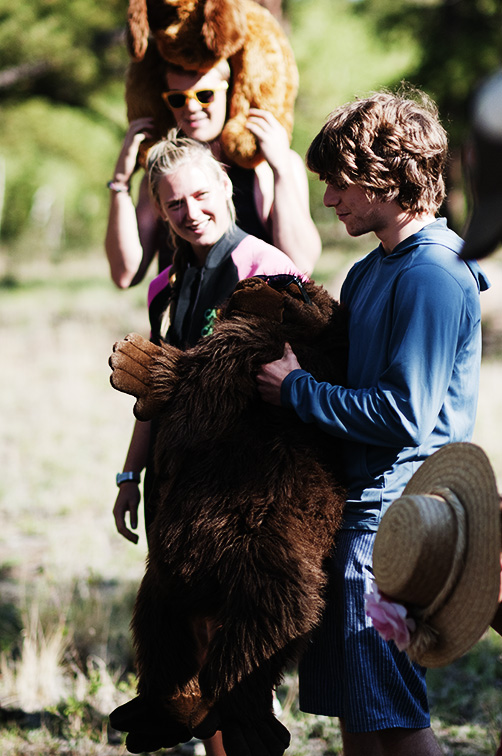 Our second stop, after the thrift store, was the Florissant Fossil National Park, which has several huge petrified trees that formed in relatives of the California Sequoia after a huge volcanic eruption in the Eocene period. The silica in the ash dissolved in water and entered the trees through their roots before it began to harden, gradually replacing the cells of the trees. It was an impressive site, and nice to learn about fossil processes in person. They even had a yurt set up where we could examine the fossils under microscopes. When we had learned all we could about fossils we found camp in a lovely forest, had some outdoor class, made a spaghetti dinner, went to bed and dreamed of rocks. 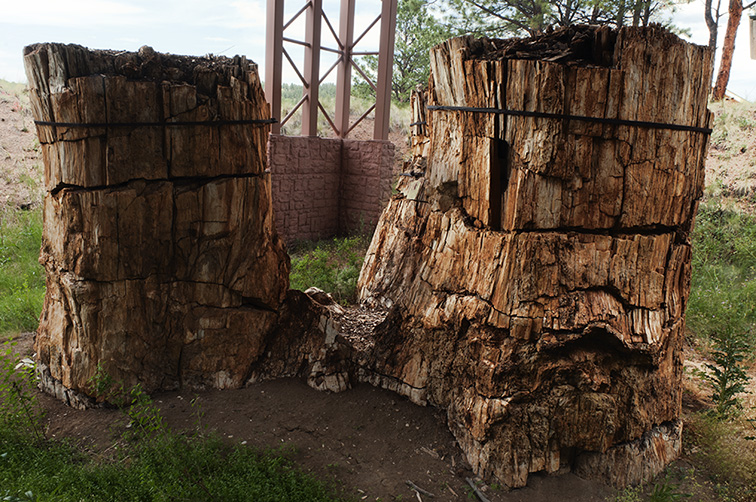 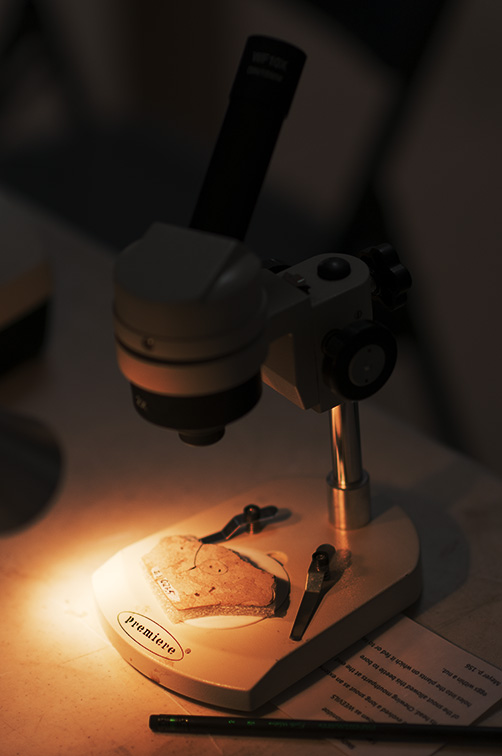 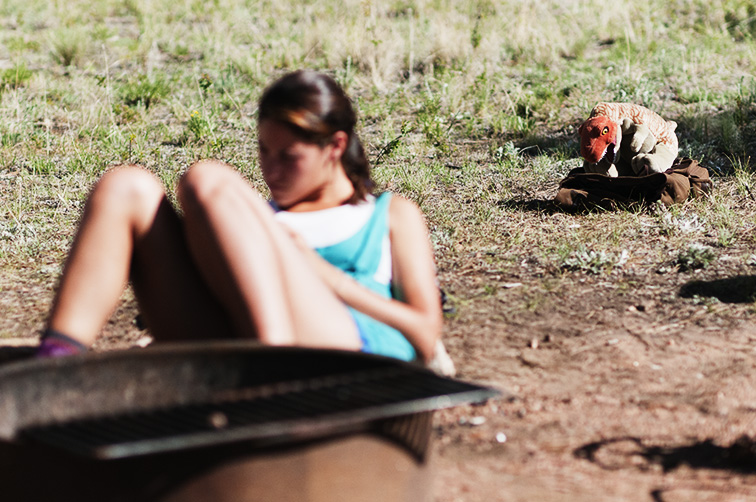 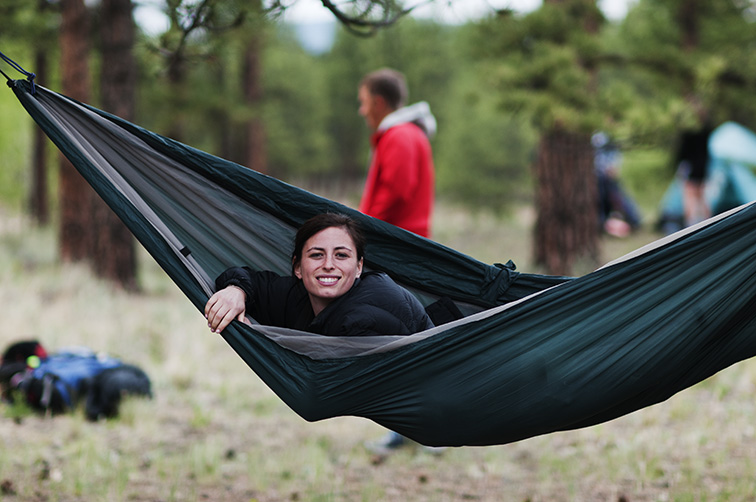 On Sunday we woke up to the Rocky Mountain sunlight, and some bird songs, and had a filling breakfast of cereal, oatmeal, bagels and cream cheese.  And of course, coffee. Properly awake we had a short class on intrusive igneous rock and went off to identify some of it, using our hand lenses and the geological scientific method. We took a break to go swimming in a river and do a little bouldering. After returning to the campsite and a little dance party in the van we had lunch and learned about metamorphic rock processes. Woo hoo! 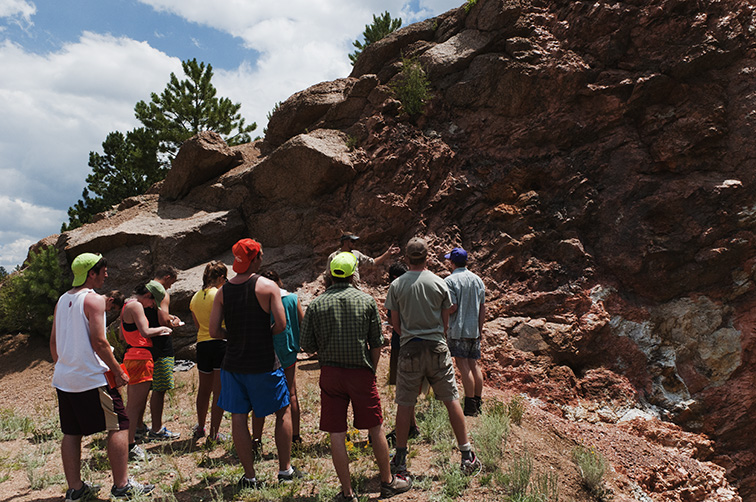 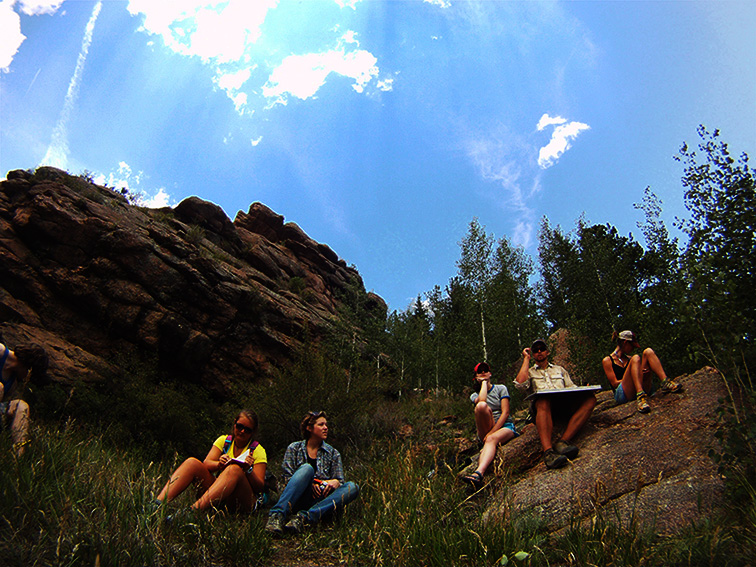 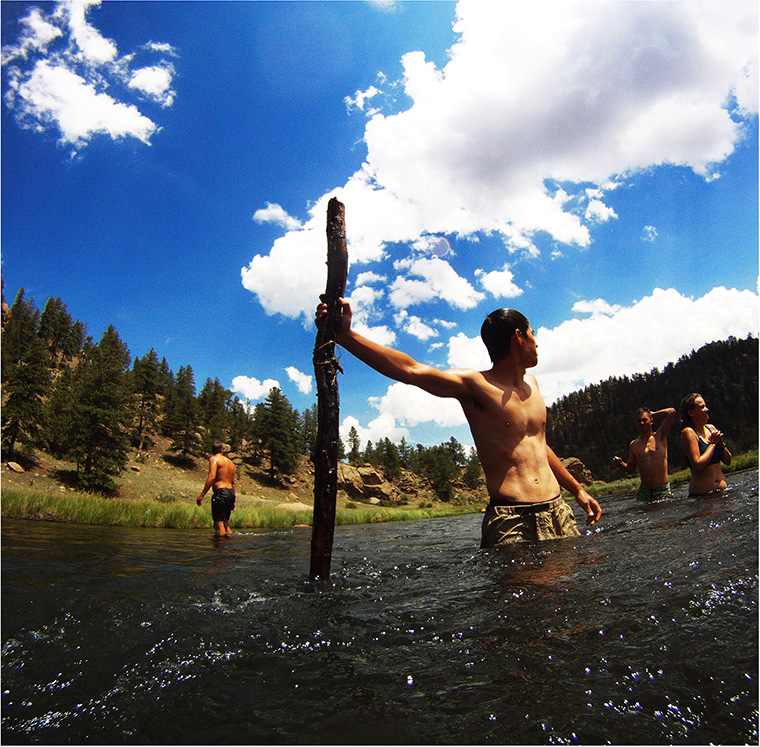 In the afternoon we hiked to a small hill nearby and walked up a road, trying to identify the rock types that Zion had placed fruit snacks and Rice Krispy treats on. We descended after it started thundering and came back to camp where we made chili for dinner and are currently playing a game called yum-yum to finish off the leftovers – the pot is passed around and everyone eats a spoonful and says “Yum-yum” and then passes it on until it’s all gone. It’s a very bonding sort of activity. 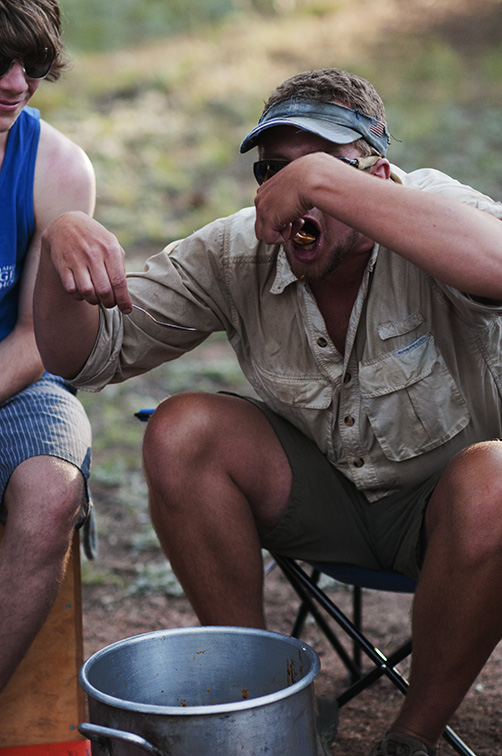 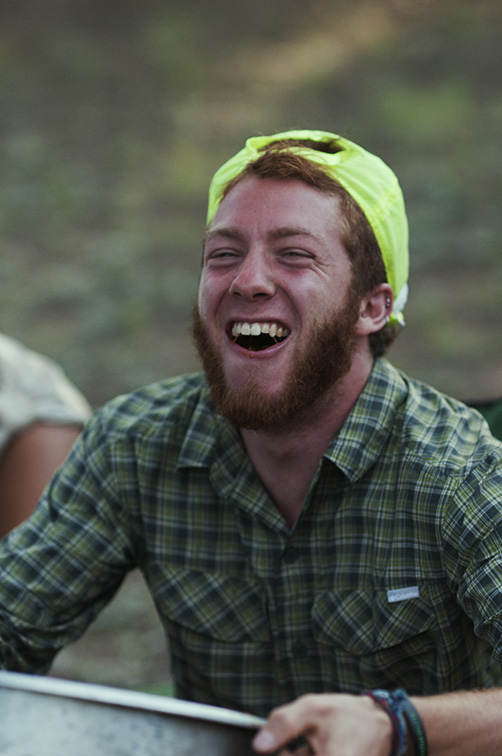 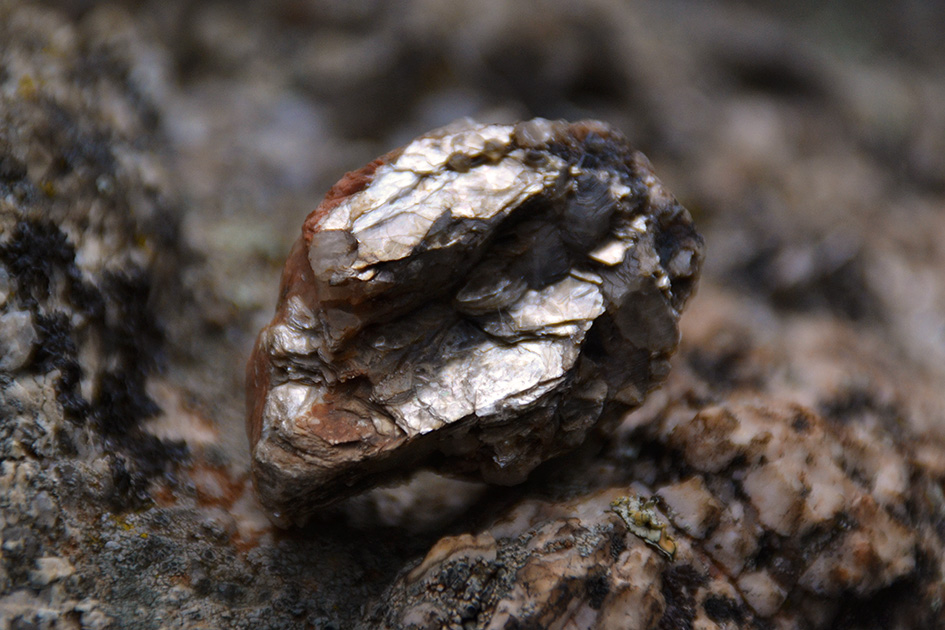