When I wandered through the City of London museum, I was bombarded by the magnificence of a city that has survived and thrived after thousands of years and many disasters in the forms of plagues, fires, war, and mad monarchs. The sheer fact that London had existed before the birth of Christ and survives to this day as a focal point for commerce and culture is enough to classify it as one of the greatest cities in the world. Yet as I reached the end of the timeline of Modern London, one detail stuck out to me that caused me to lose respect for a city that I thought should have known better: a sign stating “2012: London hosts the best Olympic and Paralympic Games ever.” 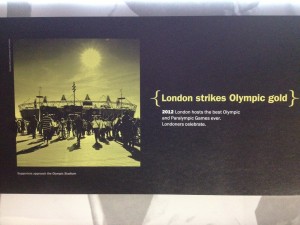 While I do not doubt that the 2012 Olympics were nothing short of incredible, the fact that the museum stated that the games were the best ever without so much as a source, with the exception of Londoner’s tweets, aroused within me a feeling of disappointed anger. Instead of finding some source that stated that the London Olympics were the best, they blatantly used their own nationalistic opinion outside of the context of history. This was a moment where my respect for London dipped slightly, not because of arrogance, but because the exhibit chose to highlight nationalistic pride over international humility, something that goes agains the very grain of the Olympic Games.