As an American History – Political Science major, policy is something that I’ve always taken for granted. I frequently discuss the intentions implications of government policy, but I never gave much thought to how it was created. So imagine my enthusiasm when I saw PS321: Public Policymaking on the course schedule. Not only was it a new area for me to think critically about, but it was taught by a new professor, Elizabeth Coggins, who came highly recommended by my advisor. I immediately signed up.

After two blocks of Feminist & Gender Studies to start off the year, I was excited for a return to my comfort zone in Block 3: bread and butter American political science. The first day of class, however, I was shocked to find that half of the class consisted of Environmental Science majors. This is because the course is cross listed as EV373, a requirement for the Environmental Science major. The make up of the class has already proven to be a blessing in disguise. In our first few days we have been able to achieve vibrant discussions, bolstered by the diversity of thought and experiences. Whereas the Political Science majors bring political theory to the table, the Environmental Science students add compelling examples and unique thoughts to class discussions.

Fortunately for me, the course has a heavy (yet rewarding) workload, without the high levels of stress typical of fourth week. Throughout our three and a half weeks, we will examine the policymaking process through broad theoretical analysis, examination of specific case studies, and visits from guest speakers. Our learning will culminate in a ten page research paper and presentation on the policy area of our choice. 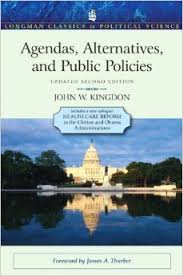 In the first few days, my traditional understandings of the policymaking process have already been challenged, complicated, and ultimately, changed. We read John Kingdon’s influential theory that problems, proposals, and political factors converge to open a “policy window” in which interest groups must “couple” their preferred policy with the problem that is being addressed. One element of Kingdon’s argument that came as a surprise to me was that, more often than not, interests create solutions and then attempt to link them a problem. In other words, we create the solutions in search of a problem. This flipped my conventional understanding of the policy making process, that of a process centered on finding solutions to problems that emerge, on its head. 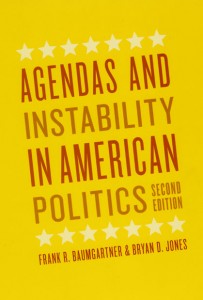 Frank Baumgartner and Bryan Jones further complicated my understandings of the policy-making process with their explanation of “punctuated equilibrium.” They contend that the United States’ political system is defined by periods of relative stability, which are punctuated by periods of volatile change. Under this framework, the same factors that open Kingdon’s policy windows can converge to create a system of positive feedback in which dramatic change explosively occurs. Once this window closes, and the positive feedback ends, the new policy forms the foundation of a new period of stability.

The theories advanced by Kingdon, Baumgartner, and Jones differ greatly from the assumptions I have always held about how policy is created. Despite this incongruence with the dominant way of thinking, they make intuitive sense. All in all, I buy their explanations of the policy making process and look forward to applying them to specific cases, such as welfare and the death penalty, next week!

Sergio is a junior American History - Political Science major from Saint Paul, Minnesota. Hailing from the great white north of Minnesota, Sergio is immune to the cold. He wears shorts year-round, arguably as a physical manifestation of his masochistic fandom of all of Minnesota's professional sports teams. Sergio is a die-hard Tigers Hockey fan and has attended every home game over the past two years. He enjoys wielding his trademark neon yellow signs, leading chants in the student section, pounding on the glass during fights, and getting the zamboni drivers to do donuts during the second intermission. When Sergio isn't getting rowdy at hockey games, you may find him in the library; he works as a tutor in the Writing Center. If he's not there, you may find him in Loomis, since he's a second year RA. You also may spot Sergio leading tours around campus. Sergio enjoys hanging out with his brothers from Phi Gamma Delta, dominating the opposition in Innertube Water Polo, working out at the gym, riding his bike around town, eating copious amounts of food in Rastall, and refining his newly-developed skiing skills at Breckenridge. View more posts