Hello again from Lima! It’s a cool Sunday afternoon here in Miraflores as we progress through CC’s Anthropology of Food in Peru.  Our most recent development is that we have started to undergo the research and writing process for our final projects.  Our professor allowed us to select a random topic from a hat, which contained various ideas about regional, cultural and festive food items.  Behind this seemingly simple and tasty research project is a challenge–Mario deliberately chose these topics because they had less literature available.  Thus, we’re forced to go out and eat these foods, talk to people and experts on streets and restaurants and overall become less reliant on our standard student methodology of immediately hopping on research databases and Google. For those of you that are unfamiliar with the great variety and history in Peruvian food, our topics include items such as:

Pachamanca: a pre-Hispanic form of barbecuing the involves the cooking of different foods (most often meats) in the ground upon a hot bed of coals, enclosed by rocks, leaves and other insulating materials. The real slow cook! Several varieties of this method exist in New Zealand and Hawai’i. 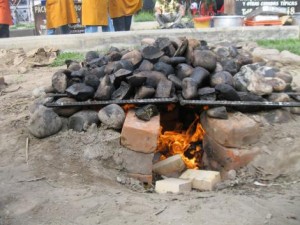 Ceviche: A very popular dish in Peru, Ceviche is a mixture of fish, lime, onions and other spices.  However, it is unique because the fish is cooked using “denaturization,” which uses the acids of lime juice to deconstruct the proteins within the fish (essentially cooking it, but without heat).  The result is a scrumptious dish of “cooked” fish served chilled and commonly accompanied by camotes (sweet potatoes) and choclo (a variety of large-grain corn grown in Peru). 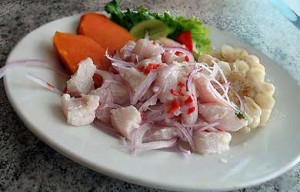 At first this was a difficult transition for us because we simply couldn’t find anything on the internet or within printed texts. How the heck are we supposed to approach a topic as pioneers of the field? We don’t know anything! But thanks to the aid of Shelley and Mario throughout the process of narrowing down our topics, we now stride confidently through the streets of Lima in search of pachamanca and ceviche restaurants.  In addition to talking about food theory and cultural dishes in class, our group has also taken a few recent excursions to places like El Barrio Chino (Chinatown in Lima) and El Museo Nacional de La Gastronomía Peruana (National Museum of Peruvian Gastronomy). As we continue to learn more about the roots of the many different foods here, we move closer towards understanding better both the unique diversity of cultures in Peru and the life of an anthropological foodie. 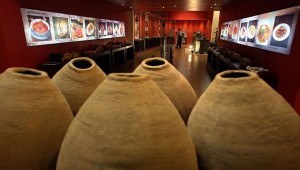 These large ceramic containers were often used in the pre-Hispanic period for a primitive version of fermentation in order to make the famous Peruvian drink “chicha.” In the Incan empire, it was considered dangerous to drink water by itself, since contaminants were known to cause epidemics.  Thus, plenty of chicha was made during this period with the aid of saliva from many different community members. Yum! 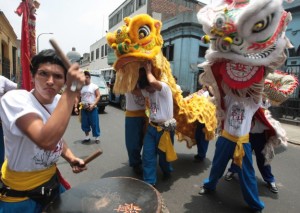 When we originally set the date to visit El Barrio Chino, we had no idea it would be Chinese New Year! Upon arriving, the streets were teeming with people, bamboo shoots and crazy dragons dancing around. Definitely the right day to visit.

I was raised a Southerner / Inner-City hybrid in Little Rock, AR. I hope one day that I will be a teacher, either teaching English abroad or teaching Spanish domestically. I love language, education, video games and cigarettes. And rugby. View more posts