When most students decide to study abroad they usually chose places like Italy, France, or Spain. While these places are obviously full of culture and history, I am beyond satisfied with my choice to not travel the beaten path and travel to Salvador, Bahia, Brazil. 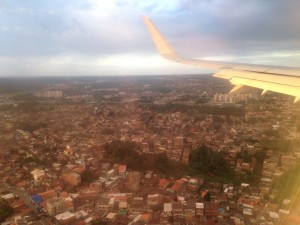 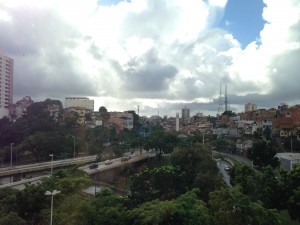 I’ve only been in Salvador for four days, but in that time, I feel like I have a new understanding of the world.For the first time in my life, I was the foreigner, struggling to understand  another language. As a butchered words, received blank stares from everyone around me, and sometimes was forced to just sit silently, I was reminded of all the immigrants in the United States. Speaking a new language is indefinitely hard. Languages are not just a new set of words, but also a new way of thinking. The people in the United States who are from another country yet can understand what I’m saying and respond in “broken” English have accomplished something I and many American’s still can’t do. This brought me to a new realization. I am stupid. I, a straight A high school student on an full ride academic scholarship to a great private college, with an A- average in college, am stupid. In Brazil, when someone says, “I speak a little English,” essentially they can understand most of what I am saying and respond coherently. When I say, “I speak a little Portuguese,” I mean I know a tiny bit of scattered vocabulary and a few grammar constructions. So many people around the world can speak more than one language, and I struggle to learn one. Most Americans don’t even give other languages that much dignity. Most Americans push through their required two years of language in high school while they’re 14 and 15 years old. After that they forget about this language unless they’re required to push through more years of language in college, but like me they learn only scattered vocabulary and few grammar forms. Living with my host family, watching them talk and laugh, and not being able to communicate with them, is hard. I want to laugh and joke, but instead I sit quietly and watch. When Americans travel, we go into new countries without knowing a word of the country’s language and expect to be accommodated. When students from other countries come to America, they come fully speaking English or something close to it.
Of course, this isn’t the only thing I’ve learned in Brazil. Salvador is so alive and full of culture. The people here are proud of their African heritage and their culture is a mix of African and European roots. Catholicism and Candomble (an African religion), stand hand and hand in the city. There is no conflict, no or struggle between the two. We went on a city tour and saw many of shrines and churches of both religions. 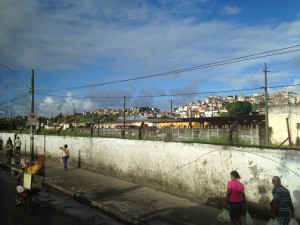 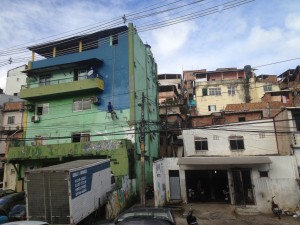 These favelas have been compared to slums. People come to the city from the countryside looking for a better way of life, and while they try to find a job, they find or build a ‘temporary’ home in a favela. Once they are here, they are usually stuck here, in an unplanned community. Not all favelas are dangerous, but some are and have drugs running through them. The favelas are mixed in with the rich neighborhoods. There is no separation or distance between the rich or the poor. One favela we saw overlooked the soccer stadium built for the world cup, a beautiful lake, and a beautiful neighborhood for the rich. As my professor put it, Brazil is a rick country, but it has a corrupted government, so that the money stays in the hands of the politicians and a select elite, and doesn’t ever reach the hands of the people. For me, the hardest part is to see people sleeping in tents on some of most beautiful beaches or graffiti on beautiful churches or historical landmarks. Of course there is no way to make this better or justify what’s happening, but when I open the window to my room and hear the thriving city below me and all the people rushing in their car to be somewhere, I know that this city is still fighting for it’s equality, and I have hope.

Naomi Randell is soon to be a sophomore at Colorado College. Currently she is quite unsure what she wants to study, but hopefully will have that little matter resolved by the end of the 2015-2016 school year. Naomi has taken one Portuguese class before her exscursion to Brazil, and looks forward to learning as much as she can while in Brazil! View more posts