The ROSETTA-Ice team had their first full day off on Sunday and everyone was eager to get out and explore McMurdo, after catching up on much needed sleep.

I went to Scott Base, the New Zealand station, which is about a 3.6 mile walk across the ice from McMurdo.

Scott Base is much smaller than McMurdo Station, home to about 100 residents as opposed to 1,000 (as of yesterday, 913). Residents from McMurdo are not allowed in Scott Base unless by invitation, though, they will let you spend money in their (arguably better) gift shop and sell you a drink; shuttles to Scott Base every Thursday night are popular for those looking for a livelier nightlife. However, Scott Base residents do have free reign in McMurdo. In my opinion, Scott Base is generally a much prettier station. It includes a breathtaking view of the Pressure Ridges, sits by the wind farm, and the buildings are all painted the same green color. I mean, whoever designed the buildings in McMurdo could have tried a little harder.

That night I took a two hour tour of the Pressure Ridges. 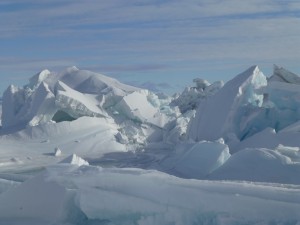 Pressure ridges form when the ice sheet and sea ice hit converge and meet land, and they fluctuate with the tides. Tours are always different as tidal forces vary, and so the structure can change quite spectacularly.

I was utterly amazed by both the architecture of the ice and the wildlife among the ridges. By wildlife, I am really just speaking of seals and skuas…penguins do not inhabit this part of Antarctica. When penguins are seen around McMurdo they are usually lost and, sadly, probably will not make very far before dying. We saw many seals, and even witnessed a seal dive into a hole in the ice!

* No three-letter acronyms were used when writing this post *

6 replies on “Scott Base and Pressure Ridges”