When I first came to campus, I identified Shove Chapel to be one of the more architecturally beautiful buildings on campus. If one were to ask me at the start of school why I found this building so beautiful, I couldn’t have said more than the fact that I thought the color and texture of the stone and wood was visually pleasing and the size and cost of materials made it stand out amongst the rest. After reaching the sixth week of Victoria Ehrlich’s Art History FYE course, I look at Shove Chapel with a new set of eyes.

In this course, we thoroughly covered Romanesque-style and Gothic-style architecture. Romanesque architecture, while not uniform across the board, can be characterized by buildings that are smaller than the heights they will reach in the Gothic era, and almost look like large homes. These buildings have thick walls and are held up by buttresses on the outside. There was often little natural light inside Romanesque buildings due to the lack of windows. Curved arches were common in this architectural style in addition to barrel vaults.

Now, as I walk by Shove Chapel, I see the building has many of the characteristics typically found in a Romanesque church. As you stand in front of the chapel and gaze at the front doors, the arches you see are all round, which differs from the pointed arches found in Gothic architecture. If you stand in the nave of the chapel, the middle section where the seating is, and look towards the apse, the curved area at the front of the church, you will notice a large window known as a rose window. This style of window is characteristic of Romanesque architecture, but later became an even more prominent feature in the Gothic style, and is made of stained glass. Many of the other windows in Shove chapel also feature stained glass, as did Gothic churches. Inside the chapel, you will see more rounded arches and a barrel vaulted ceiling towards the front of the church by the altarpiece, again pointing to a Romanesque influence. Not only has this Art History course made me appreciate the value of different forms of architecture more, but it also has allowed me to form a connection with buildings on our campus, around Colorado Springs, and the greater world around us by being able to appreciate and associate various architectural characteristics with a specific style and era of time. 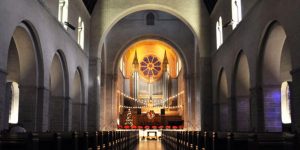 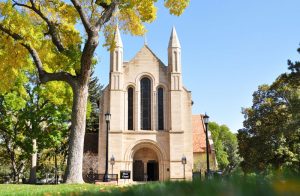